Before and After: Impressive Usage of Reclaimed Wood in this New England Farmhouse in Maine

A farmhouse was torn apart and its materials were used for a new lovely contemporary home!

With a big budget or not, it would always be nice to use some reclaimed materials to save some bucks. Aside from saving money, it can also be a thrift way to decorate or build a home and it is also one good way to help Mother Nature. There are some homes that we have featured here that used some materials from old structures where their new homes stand today. No doubt, that is a good step indeed. Today’s before and after feature will take you to England. This home reused some wood from a previous structure and turned it into an amazing new house!

A family in Maine takes apart a falling-down barn and uses the timber for an affordable new family home. The location of the house is in South Coastal Maine which is a home to quintessential New England town of Kennebunk. In the area, you will see barns and countryside homes just near lobster shacks and saltwater. Couple Scott and Karen Benezra bought a parcel of land in this area for their family to build a house on. It has an existing antique barn and farmhouse which are on the verge of being torn down. But instead of letting them go entirely to waste, the Benezras hired an architect deconstruct the structures and save timber rafters, ties and beams which will be used to create two new structures within the same footprint. 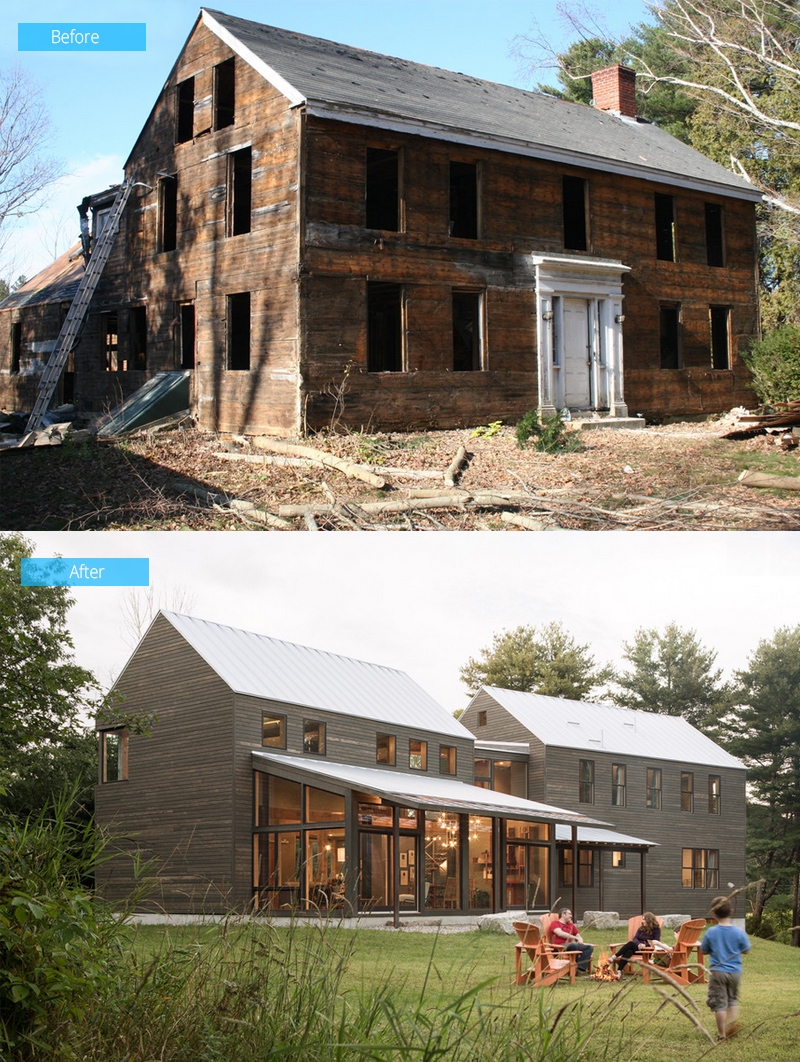 The before photo shows the stripped-down original farmhouse. The timber that was saved after the demolition was used for the new home. You will be able to see wood from the barn house in doors, floor and other areas. Aside from the original wood that got repurposed, new material was needed for siding. They also mixed in new eastern white cedar that makes it more interesting and easier to blend in with vintage materials.

When you look closely, the design of the new home is similar to the farmhouse but it is apparently a modern take on the style. I like how they were able to combine the classic and new designs n one house. Another interesting feature that caught my attention is the glass area that connects the two volumes of the house. 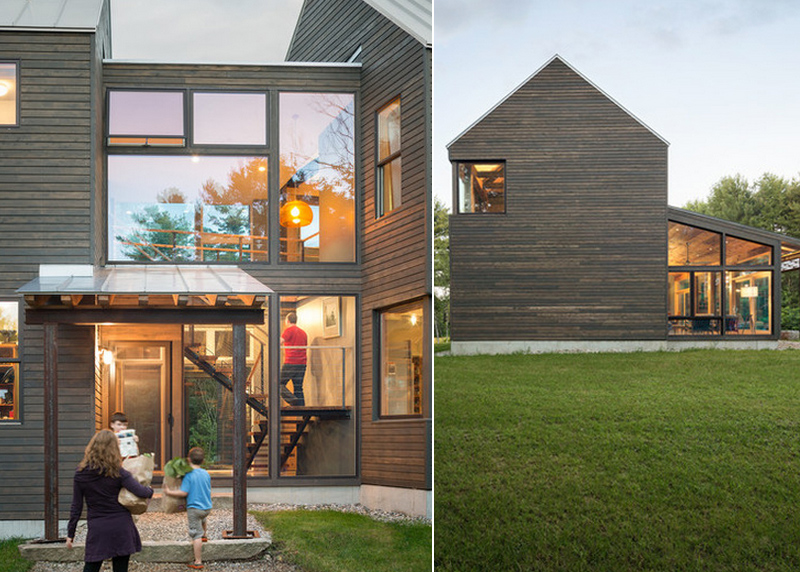 The new home consists of two main structures which is similar to the former farmhouse. It has a modern glass entry, which bears no historical reference. “It’s a reinterpretation, but we used that early-19th-century farm to very drastically inform a new kind of farmhouse,” Architect Johnson says. In the photo, you can see the family, Karen, Orie (blue shirt), Emmett and Scott getting into the house. With the looks of it, the house looks very beautiful and practical for the family’s usage. On the other photo, you can see one side of the house which doesn’t have any windows. But you can also spot the front porch which is one nice feature of the house. 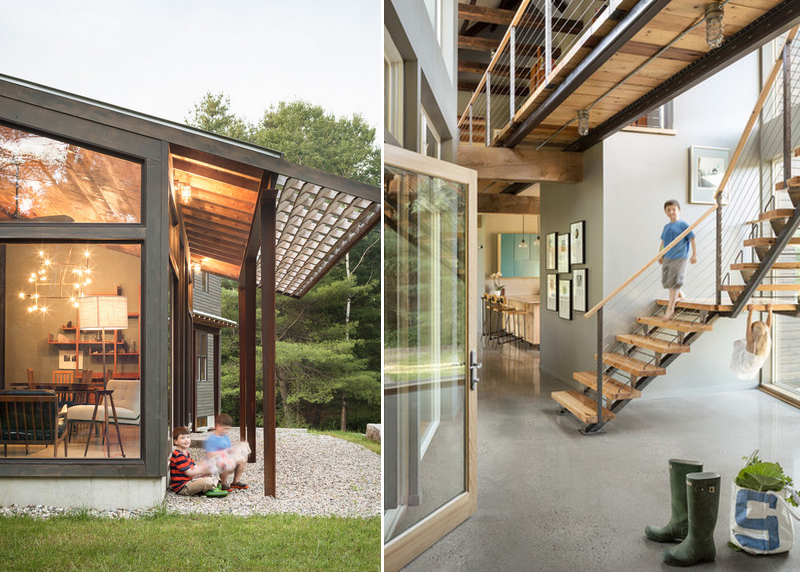 For the home’s roofing and sunshade, galvalume was used to help regulate the temperature by season. The overhang blocks sun in the summer and would help warm the home during colder months. The interior has al light and air feel. The modern entry passage is filled with natural light. To create a “transparent quality”, a local metalworker remakes the traditional cable railing system that usually comes with a lot of hardware. “Rather than using thousands of dollars and dozens of hardware pieces, we used a tension mechanism to crimp the cables,” the architect says. 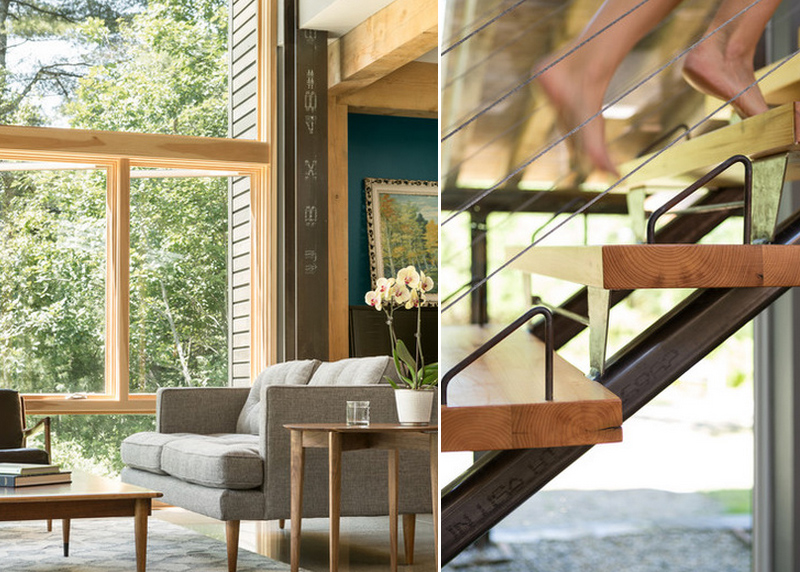 In the interior, raw-steel support columns are seen since it were left exposed, showing off the stamping from the steel mill. This feature also helps to enhance the industrial look of the home. The ceiling is made up of 200-year-old floorboards that bear the marks of the original craftsman. It has polished concrete floors; exposed steel structure; and salvaged midcentury modern furniture. According to Scott, the house “all comes together and feels like it was meant to be.” On the other photo, you can see that the gaps between the wood plank risers had simple steel staples which were also added to meet the code. 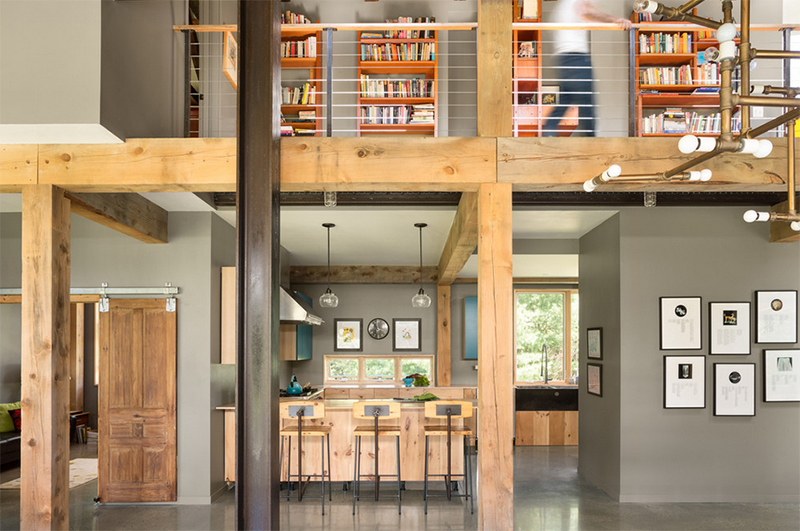 In the main level of the house, you can clearly see the homeowners’ appreciation for raw materials. The reclaimed wood was left unfinished which actually helped to save the time and money for the staining. The wood also looks great with the raw steel and polished concrete. “We knew from the beginning of the process that we were going to have to be creative if we were going to achieve the level of detail we wanted within our budget constraints,” Scott says. “Using reclaimed materials seemed like a natural way to stretch our dollar.” 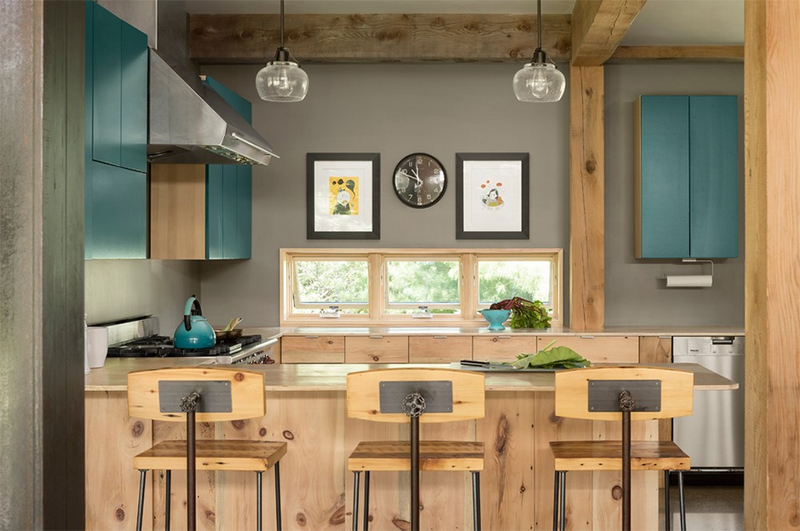 For the kitchen, they didn’t have a big budget which actually surprised the builders. So, Scott tried to do it on his own. He felt uninspired by cabinetry ideas and discouraged with costs. Hence he configured the cabinetry himself by starting with basic IKEA cabinets which he refaced with recycled pine from the original barn. They kept it very simple and let the antique wood speak for itself. At first, they considered it a temporary solution but the result was amazing. The couple loved how it looks and that it only cost them $4,00- for that. Because of that, they decided to keep it, which I think is a good decision. 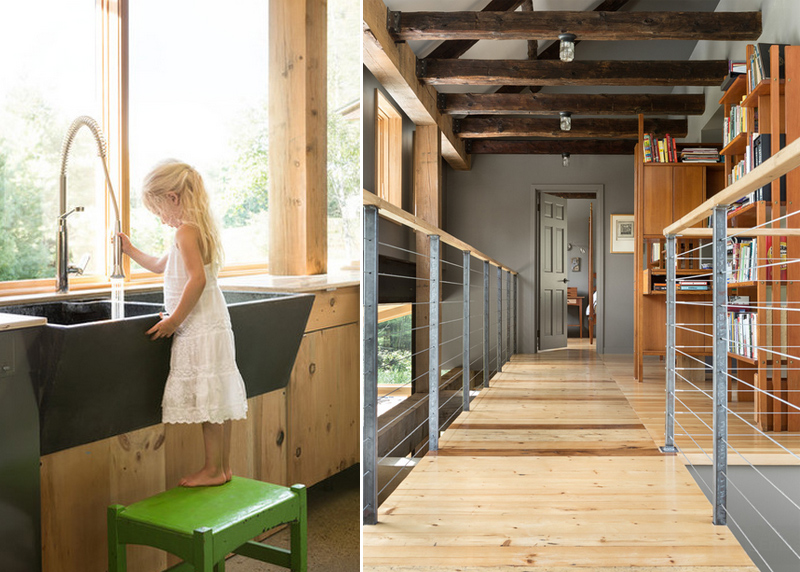 From the kitchen, one can get amazing views of the rolling hills and a pond. This pretty little girl is their neighbor who stands at the 100-year-old 4-foot soapstone sink which was bought at a home sale in the nearby town of Kittery. When you go upstairs, clean cable system was used for the railing which kept the hardware minimal and the cost low. You can see the exposed recycled beams here which lead to the master bedroom. These were wired for the jelly jar lights before it was installed. 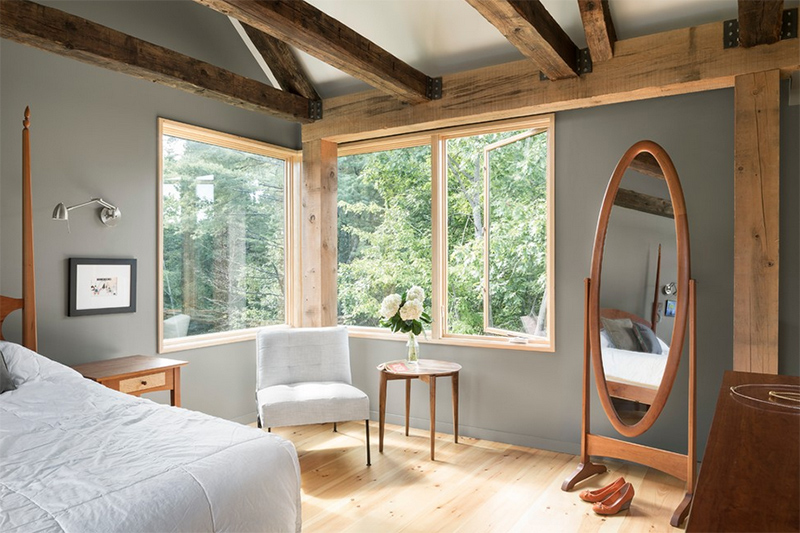 The master bedroom looks beautiful with wood and white combinations. There are exposed rafters that mimic the former barn’s construction. It also has a picture window that captures large swaths of the surrounding forest. “It’s exactly how they used to build barns — leaving everything exposed,” Johnson says. 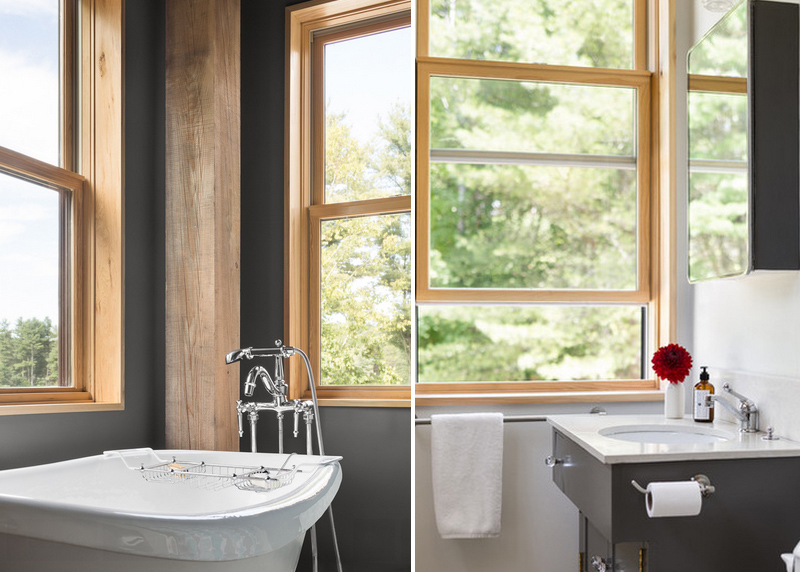 A Kohler Birthday bathtub was bought by the couple from a tradesman who had taken it out of a remodel. “It had been in the guest bathroom of someone’s second home and probably had water in it twice,” Scott says. All their plumbing fixtures, electrical fixtures, and kitchen appliances were all salvaged as well as the bathroom fixtures, including the guest room vanity. 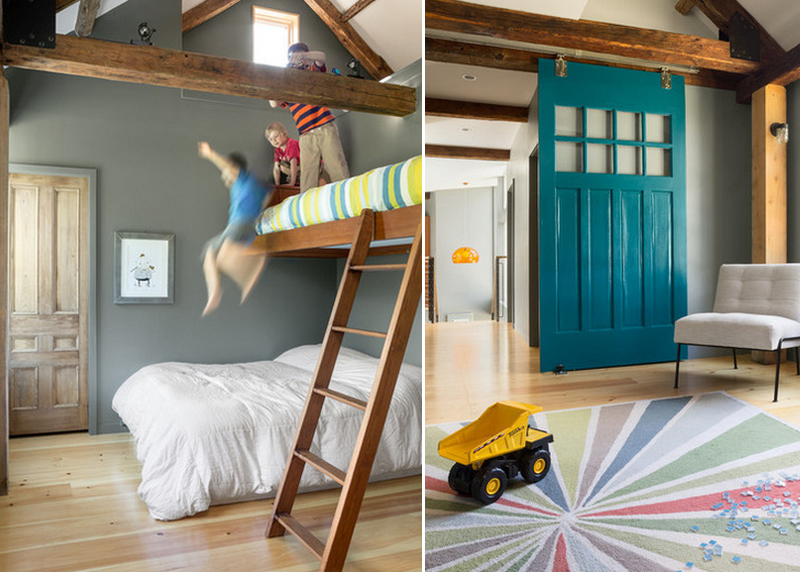 The bunk for the boy’s bedroom came from the Weston home sale. The beds were anchored to the walls so the room wouldn’t need support columns. If it had, it would interfere with the design. For sure, the boys loved the loft play space that has a small window and a secret passageway. Meanwhile, a turquoise sliding barn door (another salvage find) opens off the hall into the playroom.

The Benezras spent about $225 per square foot, which is a lot lesser than what other families would spend for a home’s like this one. “This really was a study in affordable design,” Caleb Johnson Architects + Builders noted since most of his clients would spend around $350 per square foot. The family’s involvement in the design helped them save a lot of money but that’s not all. The use of salvaged items and reclaimed wood also helped them a lot to save money. I like how the house turned out. Here is a trivia: The family didn’t buy a single new door for the house because all of them were salvaged! Amazing, right? And I like how they used the wood from the old farmhouse. I could tell it was a good quality of wood indeed!

A student who has interest for home design and architecture that is combined with her first love, which is writing. She finds delight in seeing unique homes and decors especially that she is aiming to get her own home in the future that perfectly depicts her chic and lively personality.

Yaraville House: A Unique Contemporary Extension to a Home in Australia

Incredible Innovation Made in a Home in Peterborough, Ontario

Before and After: Impressive Usage of Reclaimed Wood in this New England Farmhouse in Maine