A creative way of using wood for a home is to utilize it both for the exterior and interior.

Many homes in Japan are made from wood but it is getting more difficult to use that material in the urban area because of fireproofing the house. Aside from that, many people have lived in very limited space of land and the distance between neighbors are already very close to each to other. Because of that, instead of wood for exterior materials, industrial products are used. Wooden houses cost a lot of money for disaster prevention and maintenance but wood has many advantages too. One of which is its soft texture and being able to use nails on it that are seen in Japanese traditional homes.

The designer reevaluated the positive aspects of using wood for the home and thought about designing a wooden house in the city while considering disaster prevention and maintenance. The house is designed based on Japanese tradition. Meanwhile, the designer also considered the two aspects for wood deterioration which is ultraviolet from the sun light and rain. The main facade of the house was faced north since the south side is congested and cannot expect sunlight. On the other hand, the amount of rain that blows in and the distance of the overhang are carefully considered to make sure that the materials will not get wet by the rain. There is a fire wall on both sides of the house that enables to use affordable wood material and wooden window frame even in the high density area. It has roof eaves that of 1.35m to 2.85m of the parking space that is facing the north side road. The design of the house was really studied well and isn’t just for the sake of aesthetics. We can learn more about the house in the images below.

Unique feature: The facade of the house has a “checkered” look using wood and glass. It also served as shelving for the interior. 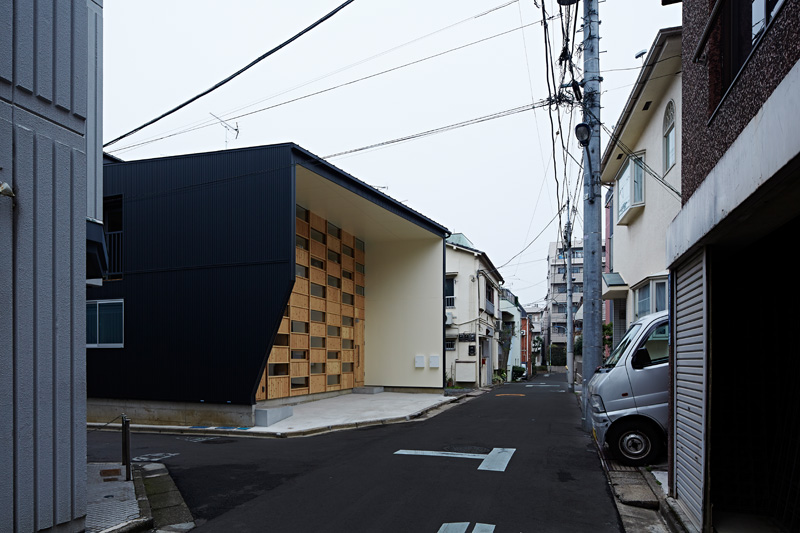 Since the designer wanted to design a home that used wood, he made sure that it is also fire proof and would survive the changing weather. This modern home with geometric lines is a sure head turner in the streets of Tokyo. Just look at the combination of materials you can see here. 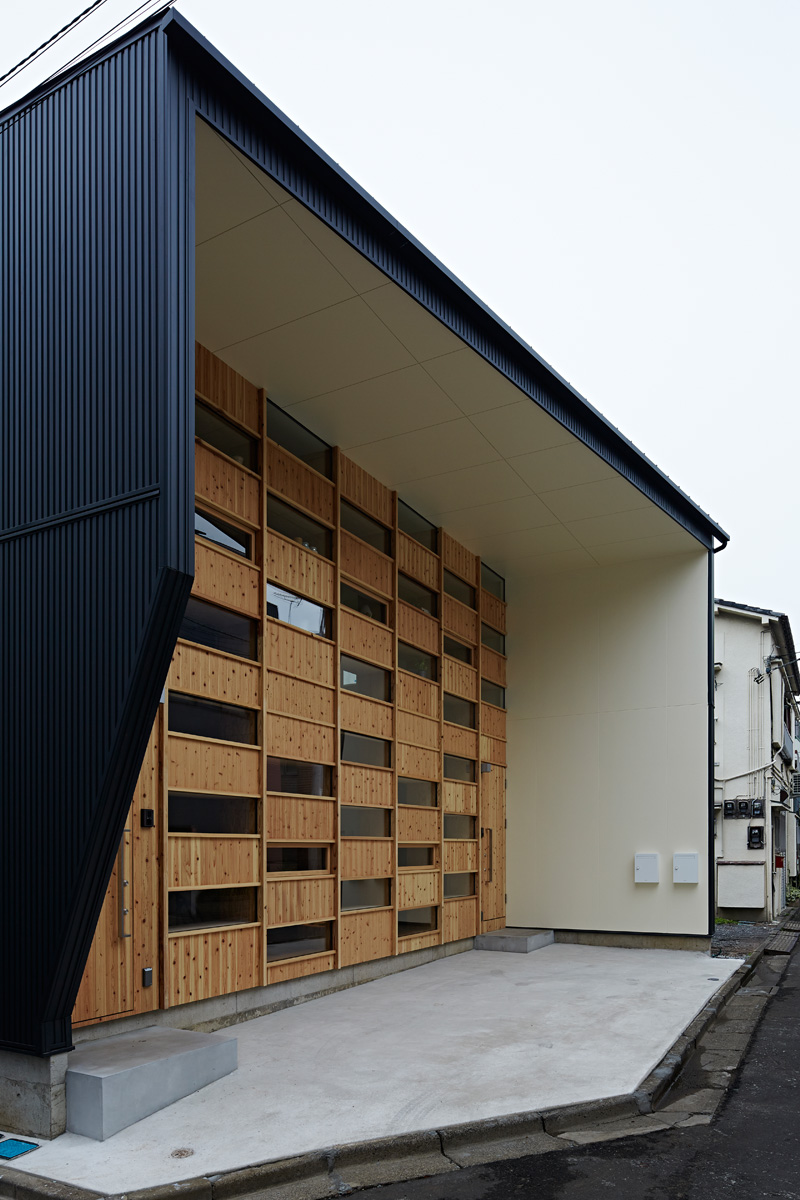 The checkered wall with 50% opening is made of 50mm×400mm LVL placed in 1090mm pitch. The bearing wall was made of structural plywood and glass that is arranged in checker. For the outer part, cedar plate is fixed onto bearing wall while the glass were arranged in various heights. 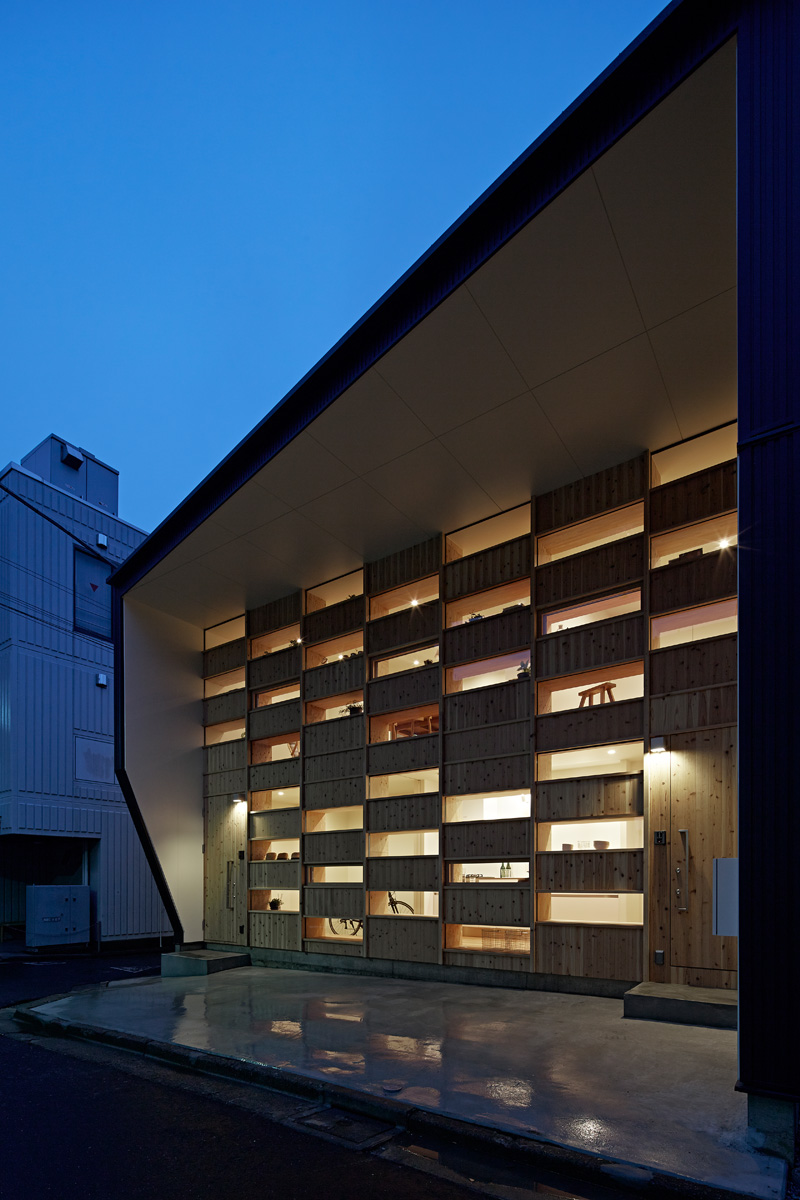 The glass part of the checkers also served as the window that allows to take in light from regular height, near the ceiling and near the floor. It would also take in stable light from the north side during the day time. You can also see here the wooden door integrated on the checkers. 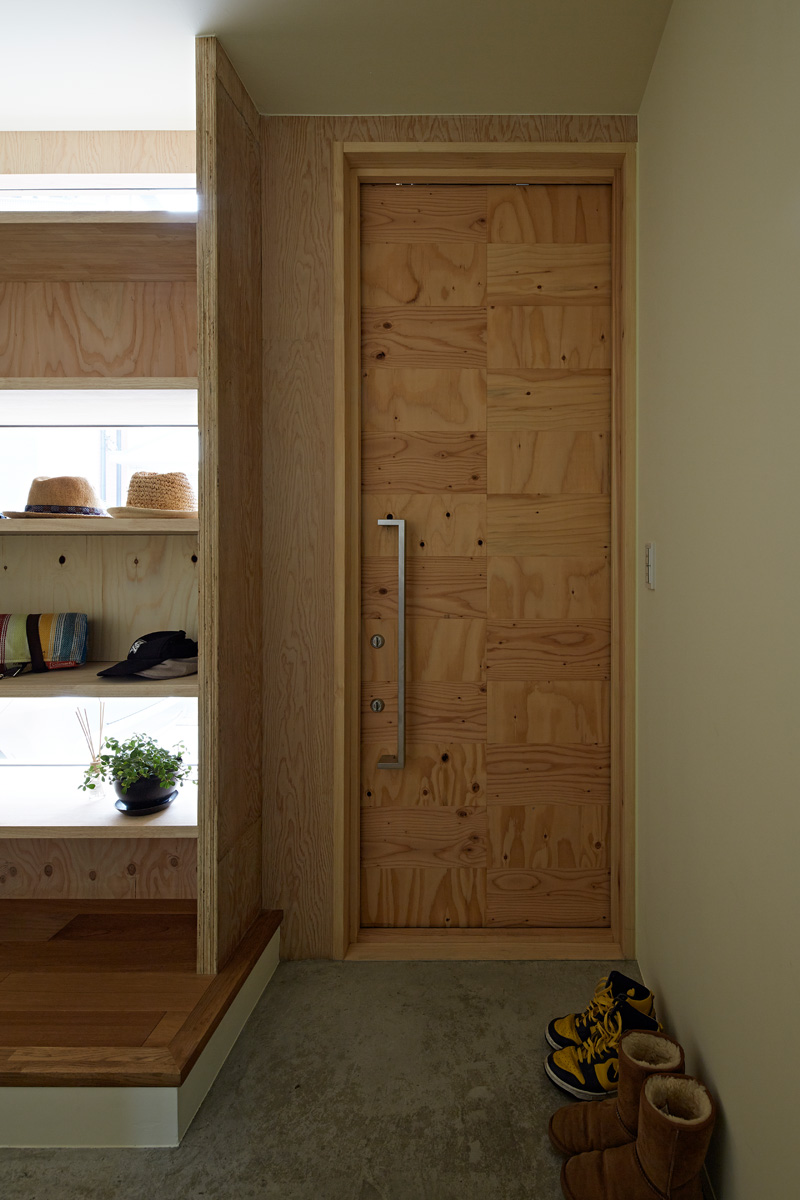 Once inside, you will go through a wooden door with steel handle. The foyer which also serves as a mudroom used concrete for the flooring. The materials matches well with wood. 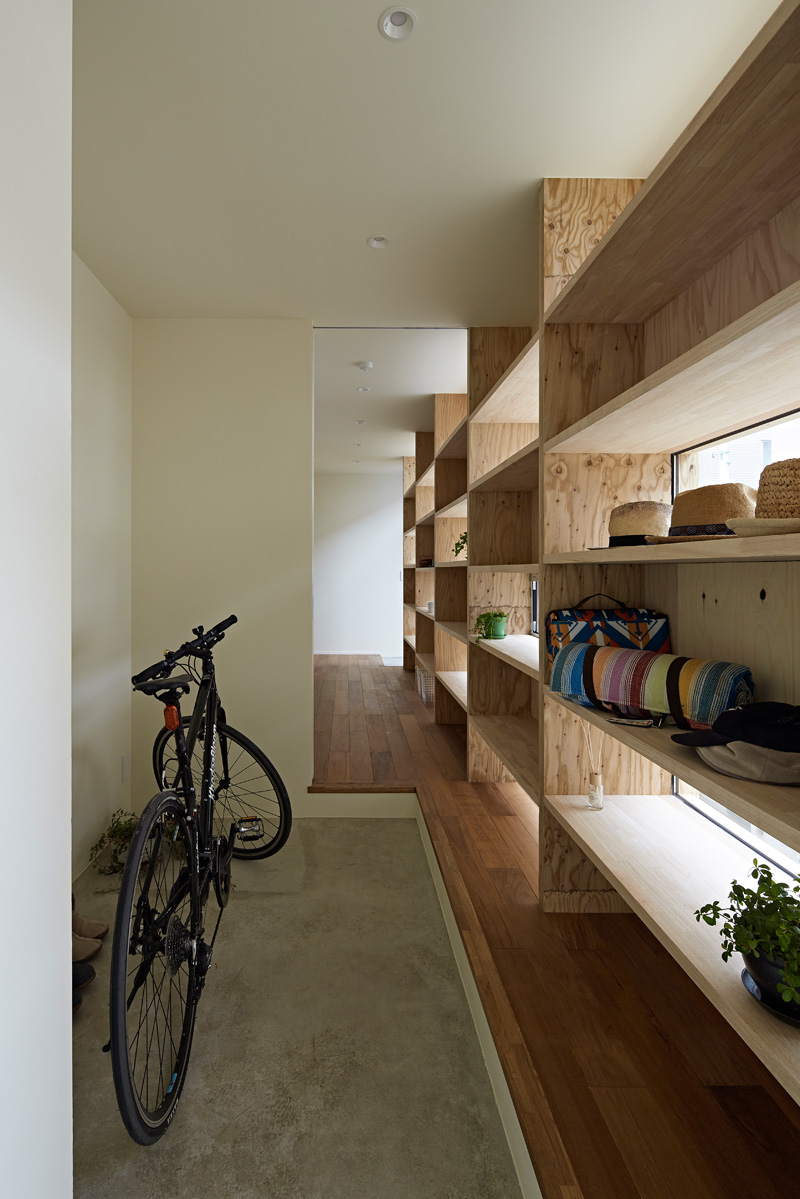 Aside from being a mudroom, it can also be used as a parking area for a bicycle. Don’t worry about soil and dirt because the wooden flooring of the house is elevated which means your dirt will not be taken into it and it would also be easier to clean it. 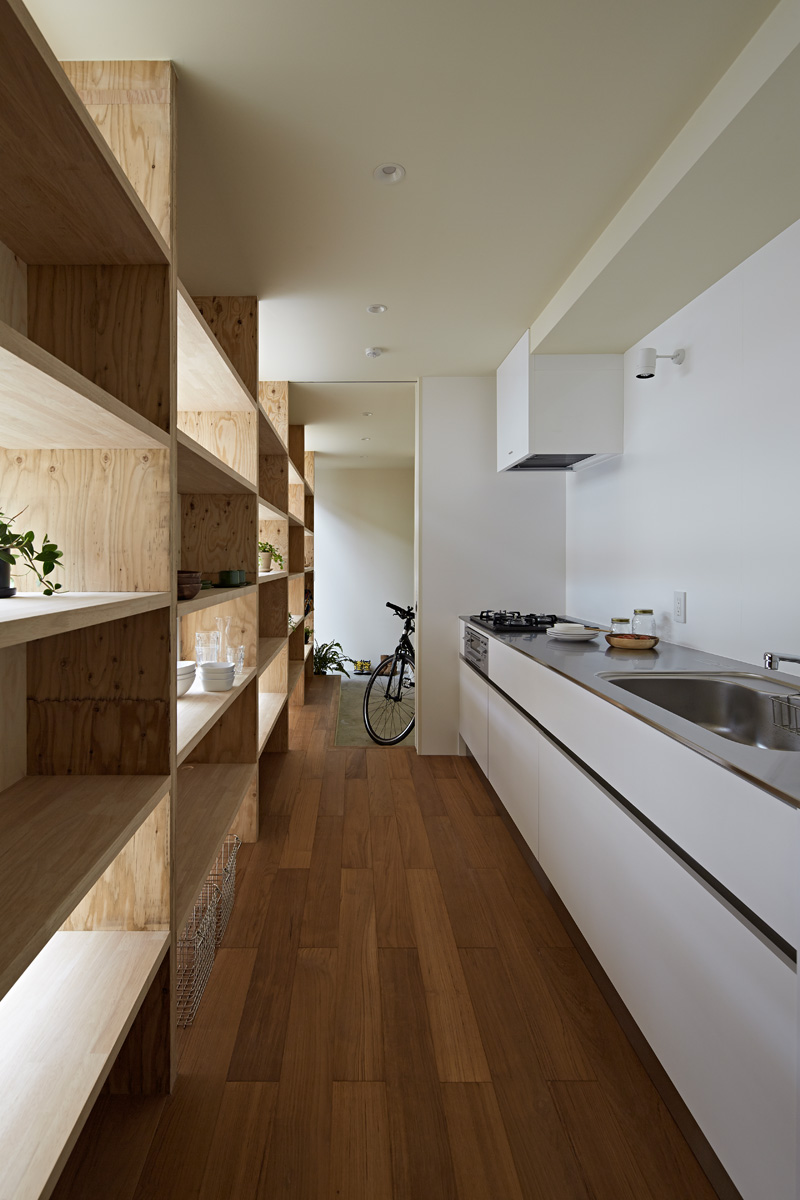 What welcomes you at once is the kitchen area that faces the checkered walls. A long kitchen cabinet with countertop is attached to the wall where the sink is also installed. Apparently, it is also where they prepare and cook food as you can see the range on it. The use of white and stainless steel is a sophisticated combination. 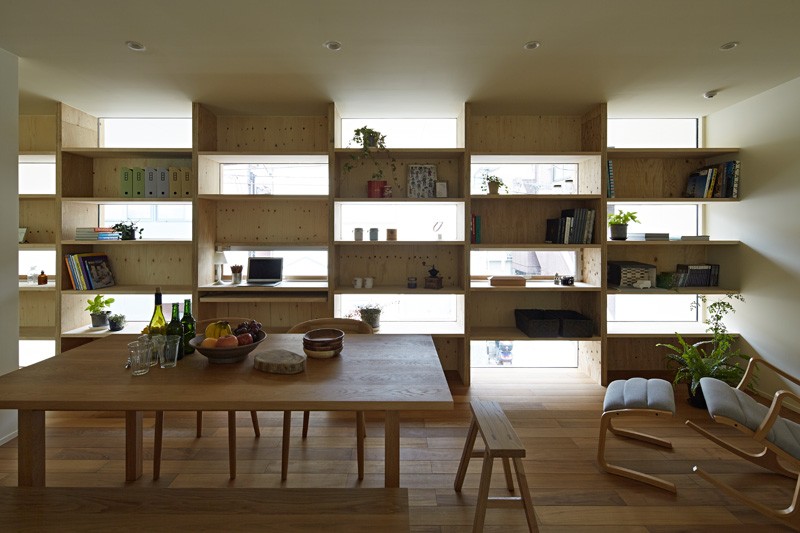 Inside, the checkered facade is a shelf with depth. The owner enjoys displaying small items on it. The wooden shelves can also assure privacy at the same time. Going back outdoors which we can see through the glass on the walls, is the large eaves that is used as a parking space. But when it is sunny, the owner works on his hobby such as taking care of his fishing gear and bicycle on that area. 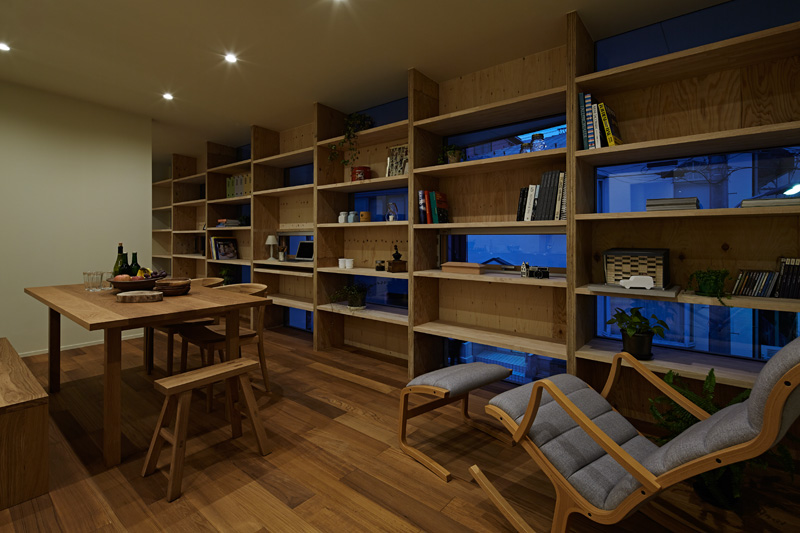 During the night, you can see the outdoor area through the glass on the wall feature which also serves as a window. I actually think that the privacy is low and that a blackout curtain might be necessary but I don’t know about the owners of this house. Also seen here is the dining area using a wooden dining set and a gray lounge chair.

Read Also: Distinctive Geometric Forms of the Scape House in the Shiga, Japan 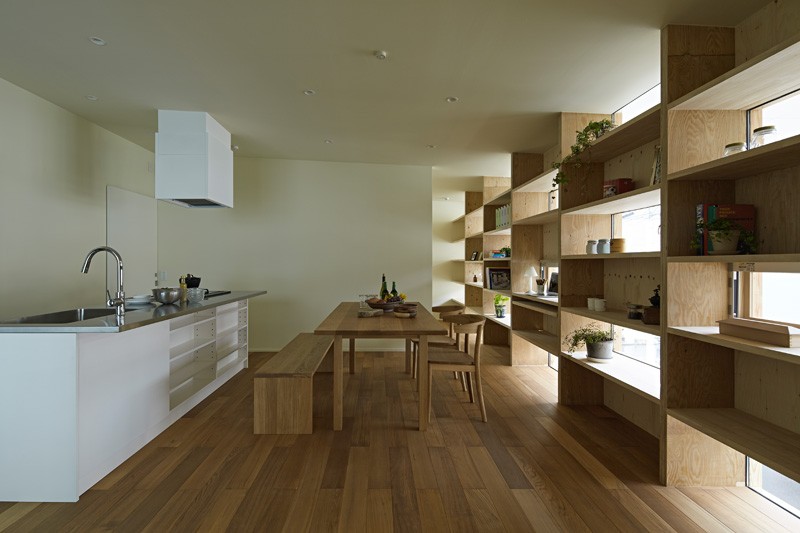 The interior has an open floor plan where the dining and kitchen is just located near each other. Using white for the kitchen, distinguish it from the other parts of the house and it is being highlighted too because other areas usually make use of wood. 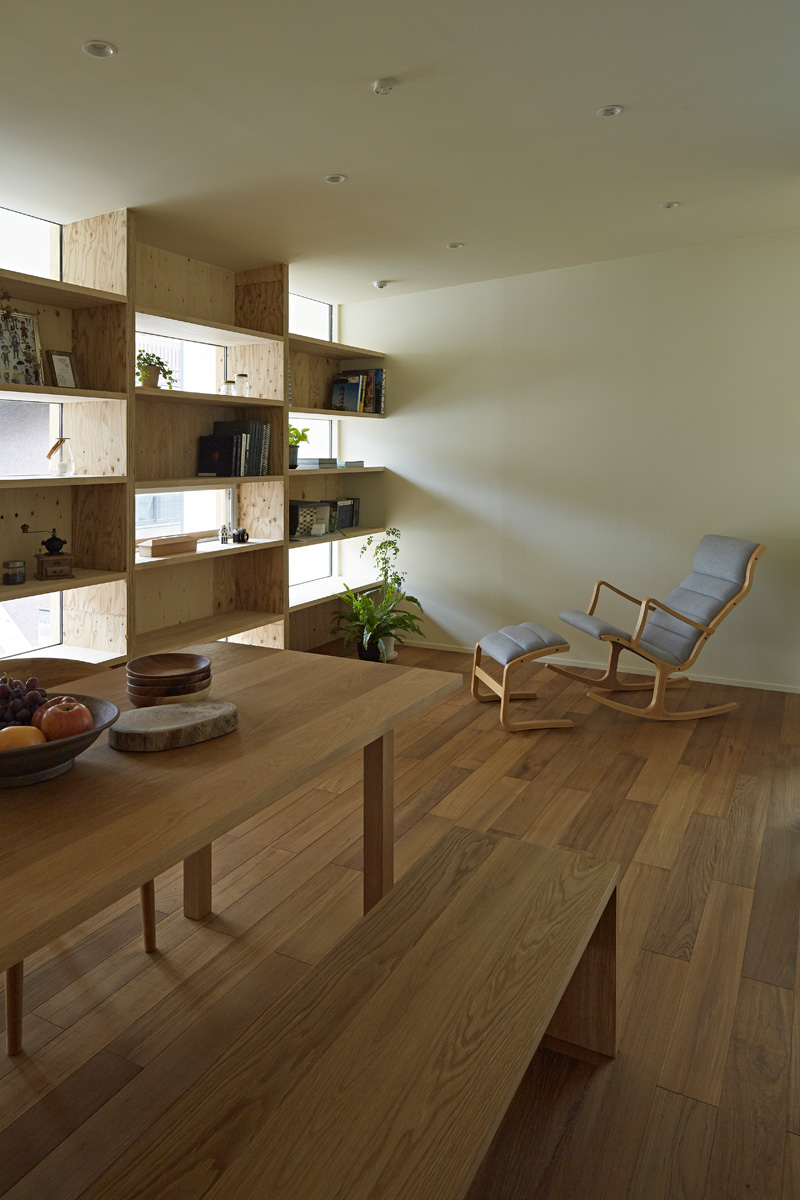 This part of the house is on the lower level with many wooden elements. Obviously, the designer was able to get into his dream of designing a house made of wood to mirror Japanese tradition. For sure, the owner is equally pleased of this house design too. You can also see here some plants which is a good idea to bring more natural feel and freshness inside. 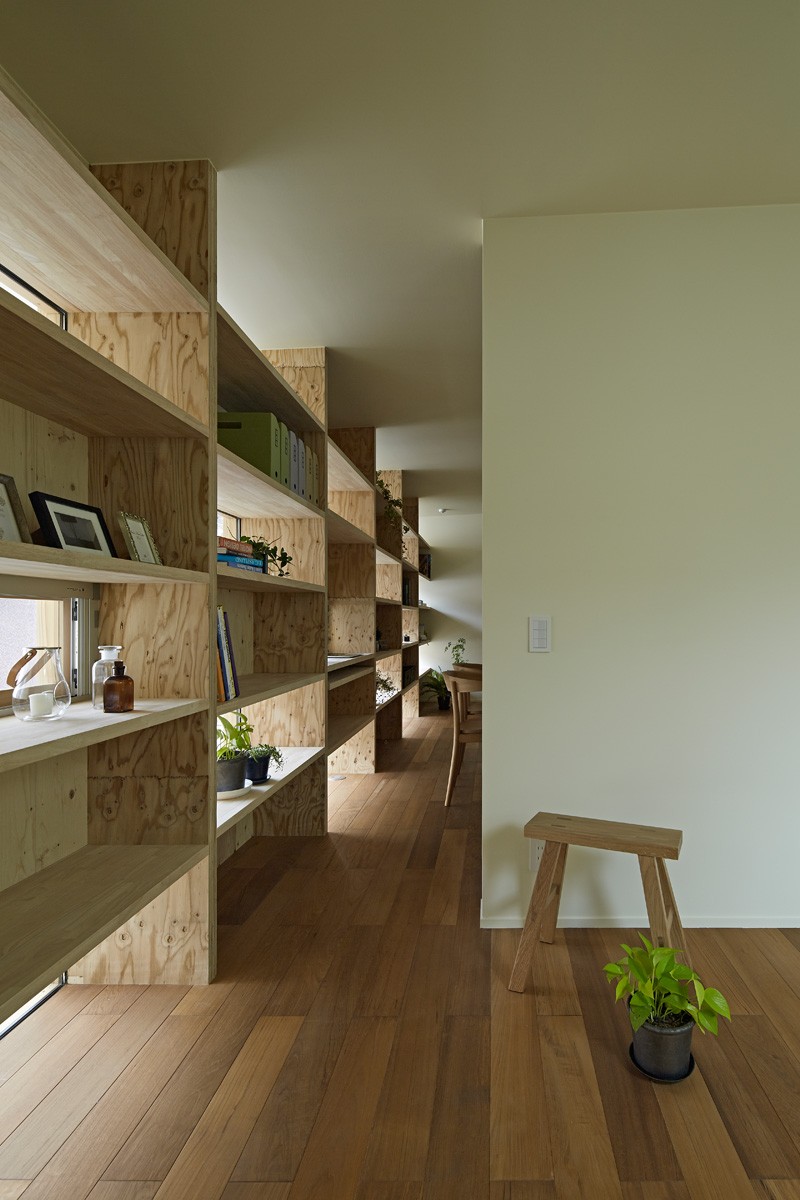 Speaking of plants, you can see that potted plants are indeed everywhere. Adding greens make it look more beautiful especially that the house use wood. There are also some gorgeous display on the shelf as well as books and other items that are treasured by the owner. 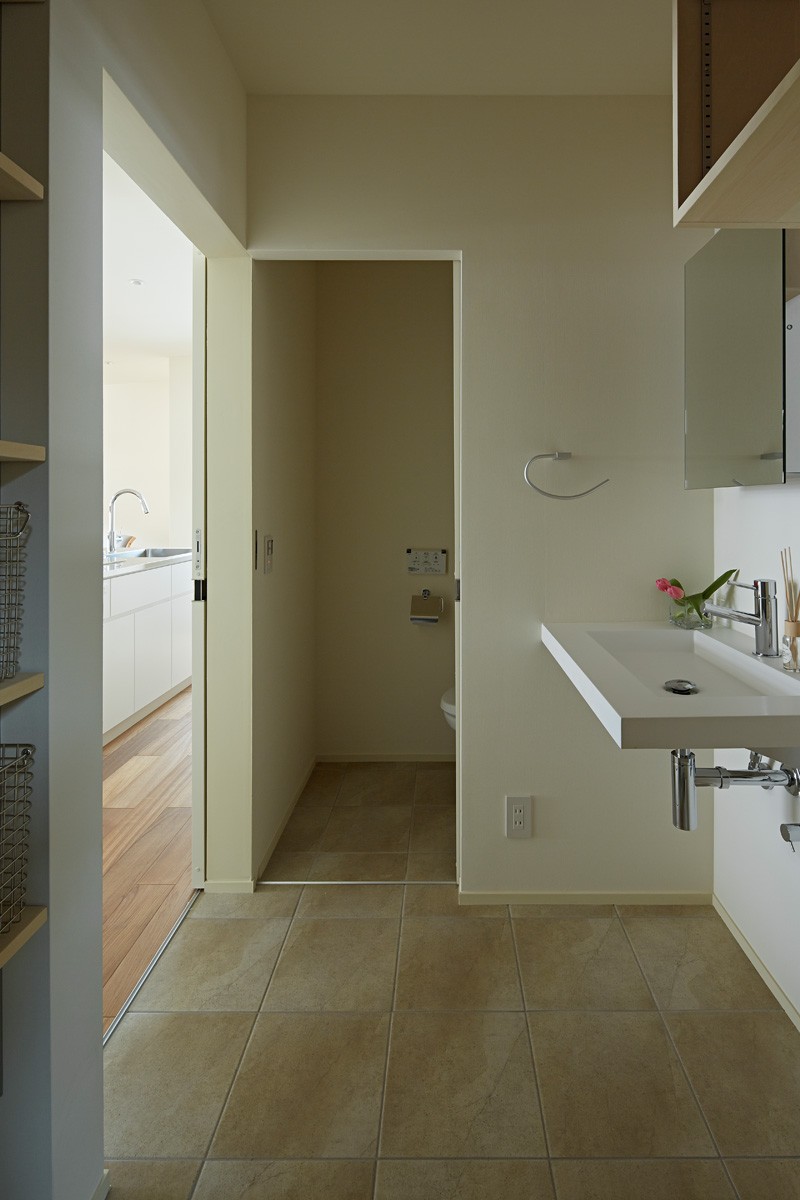 This is the bathroom of the house which is obviously small but we are certain that it offers everything a homeowner needs for a home. Aside from the toilet, you can see here a lavatory attached on the wall and some wire baskets on the other side which gives a hint that there is also a laundry area here, although, I am not sure. 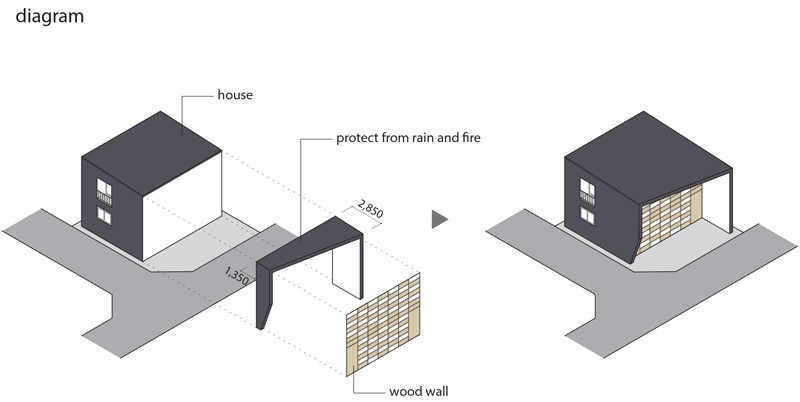 The design of the house is indeed well planned from the set back to the protection of the wooden facade. It also made sure that the house will be protected from rain and fire. 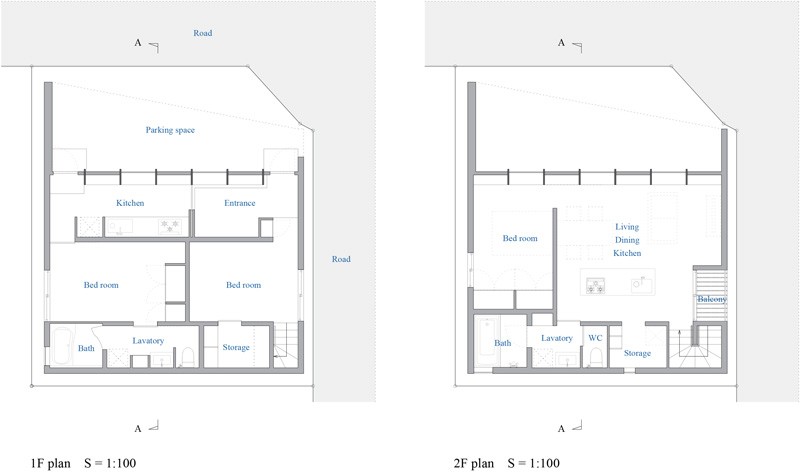 The house is comprised of two levels and you can see it on the above floor plans on what comprised every level.

With all the challenges that the designer faced for this house, I am impressed on how the Takeshi Shikauchi Architect Office finally came up with a design that would show Japanese tradition, climate-proof while still looking beautiful and considering the needs of the owners. This is indeed a house that deserved some attention because of its design using wood. I know you like the “checkered” part but what I love the most is how it made sure that wood will be preserved and will not be easily deteriorated from sun’s heat and rain. How about you, what can you say about the “Checkered House”?