The interior of this house has an impressive snake lighting that brings an exciting element to it.

Whatever kind of space you have, lighting would be one feature that will make it appear beautiful and full of drama. We have seen how lighting is used both in the interior as well as in the exterior. There was even one apartment who added colors in their space through lighting. There are many ways that you can use lights for the home because you don’t have to settle with boring lighting. You can always do more. As a matter of fact, we are going to show you an apartment with lovely lighting which they call snake lights.

In Nagasaki, Japan is a house of wood and stone that was built in a quiet residential area at the top of the hill in Sasebo. This home in the Nagasaki Prefecture features a living area, dining area, office space and the Japanese-style room on the second floor which could also be turned into a 23 tatami mats free open space by removing the movable screen on the Japanese style room. One feature of the house that has caught attention is its line of indirect ceiling lights that snake throughout the interior of the home. The snake light of the house is designed with a continuous style from the red cedar floor through the stone wall TV board that lead to the ceiling on the top, thus creating a rhythmic sense within the home’s modern style living and dining space. The line of the light starts from the floor, then up to the wall, across the living area and then to the dining area and ends at the kitchen. Let us take a look at the images of the house below.

Unique feature: The residential building has a modern minimalist design featuring a line of light that continuously lead from the living area to the kitchen.

Similar House: Impressive Lighting of a Black and White Apartment in Moscow 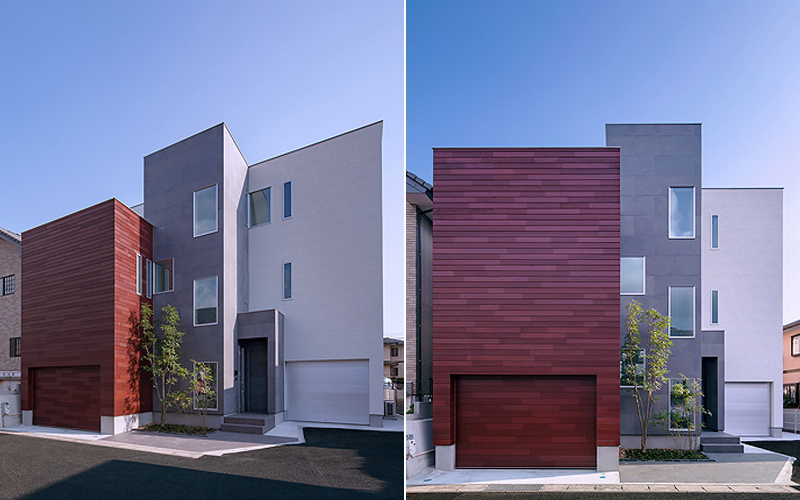 You are looking at the exterior of the house which has a modern design. For sure, you can notice the play of shapes and lines in here which turns out really nice. You can also see that the placement of the window is creatively done too. 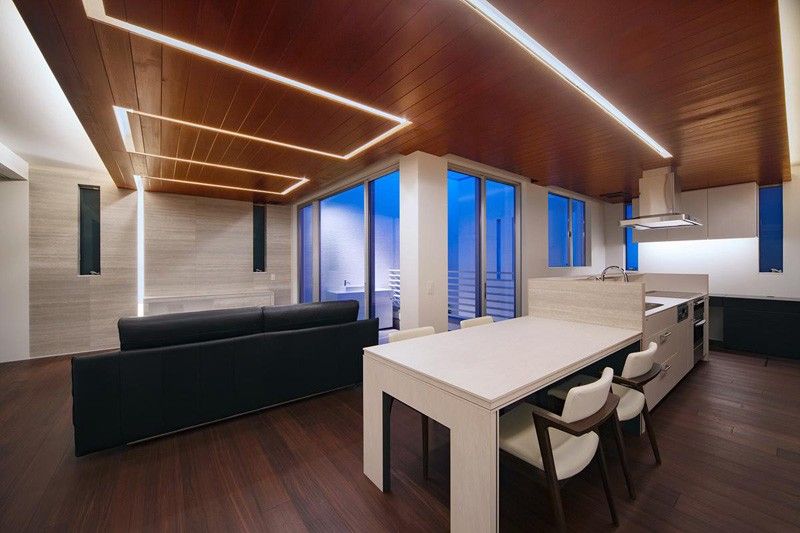 The interior of the house is just simple and beautiful with a mix of materials from wooden ceiling and flooring to a stone wall. You can also see that modern colors are being used in here. 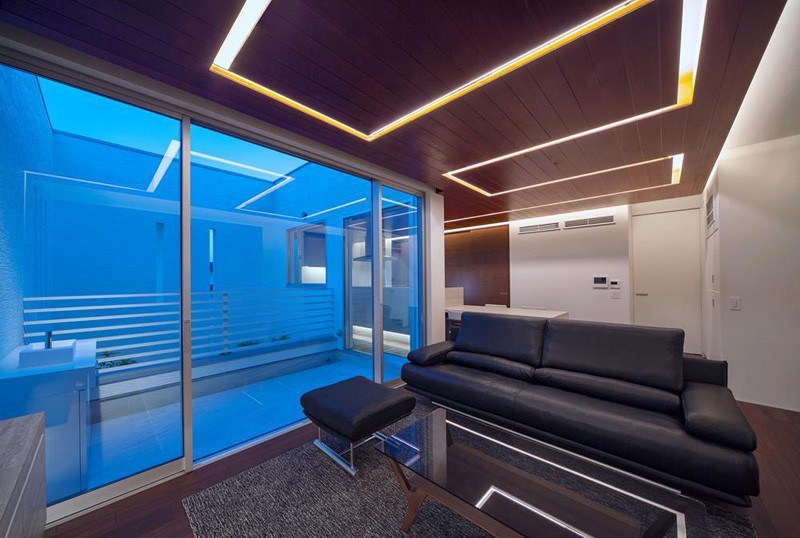 You can see the lighting in the living area in this image and you can also see that leads to a glass covered area that can be seen from the living space. Leather sofa and ottoman is used for the space paired with a glass coffee table. 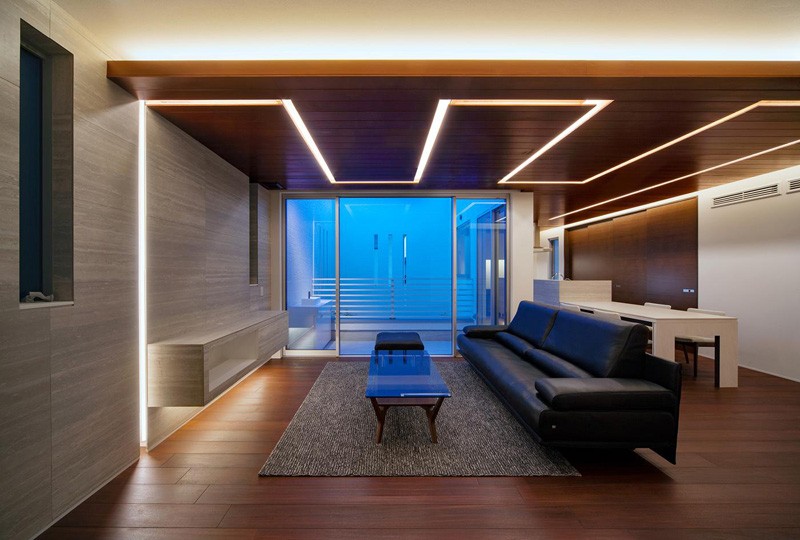 Looking at this image, you can notice the manner of the light’s movement which looks like the snake game we have in the classic Nokia mobile phones. It looks really nice as it lights up the walls to the ceiling. 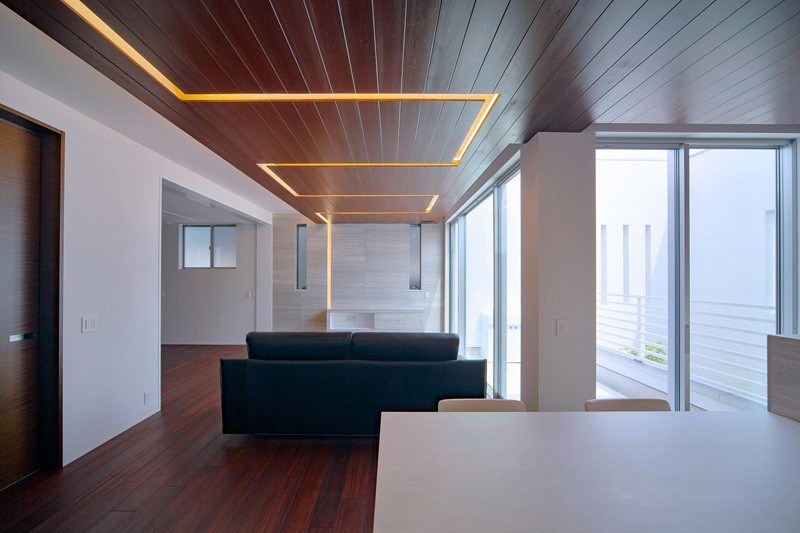 The light continues from the wall of the living area to the kitchen area. With that, it seemingly threads the space together/ You can also see here that its floor to ceiling glass allows natural to get into the interior. 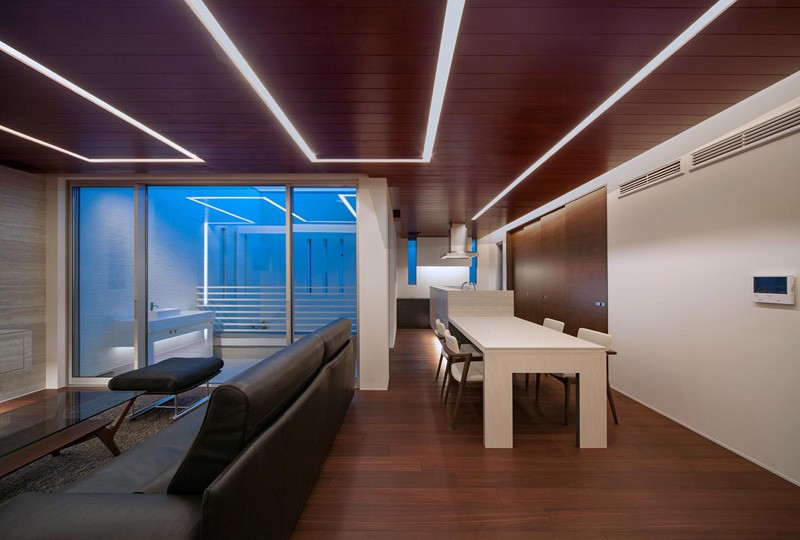 The interior has an open layout which provides easy access to the kitchen and dining areas. Since its concept is minimalist, it used white dining set. You can also see here that there are wooden sliding doors that I can tell would lead to the private areas of the house. 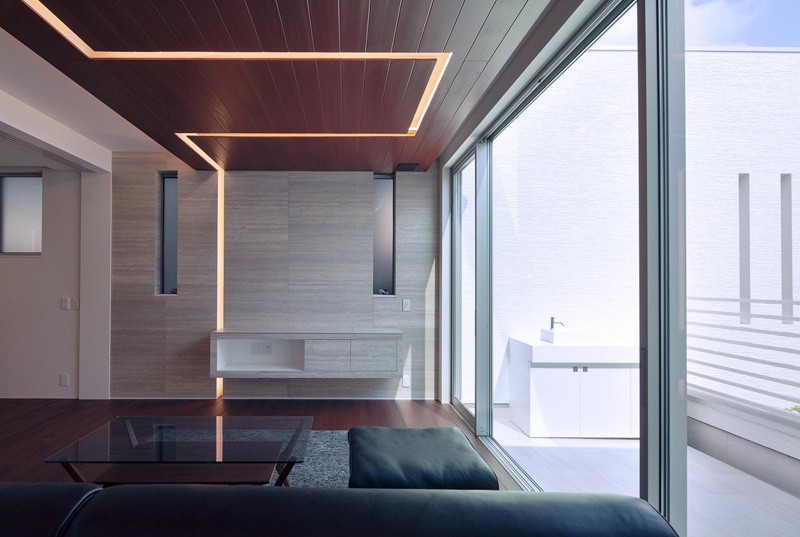 Even if wood is used in most areas of the house, the designer utilized various colors and textures for the wood just like what you have seen in the low cabinet which appears to be a good spot for a television. 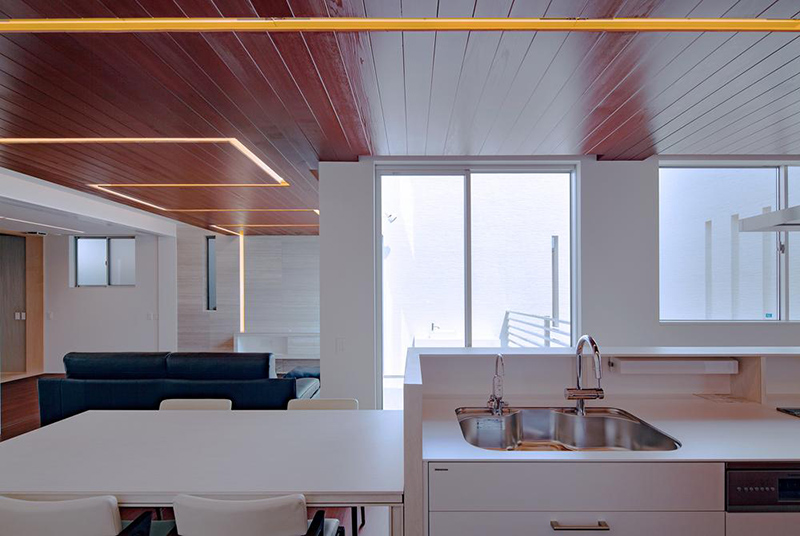 The kitchen is also white like the dining room. The dining table is connected to the kitchen’s working area that carries the sink and gas range. It even has a range hood which you can see in this photo. 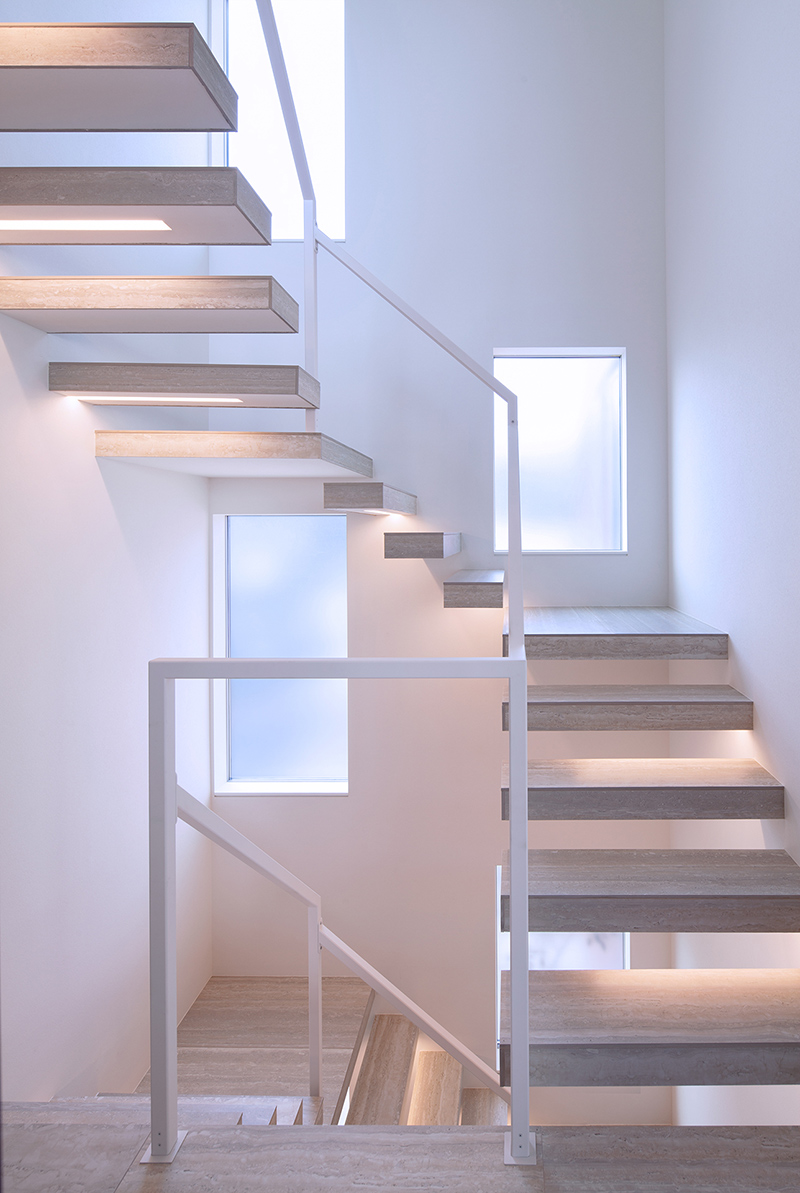 Aside from the snake light in the living area to the kitchen area, the stairs that lead to the upper level of the house also have lights on it. Even if it has a simple design, it is the lighting that made it appear really awesome. 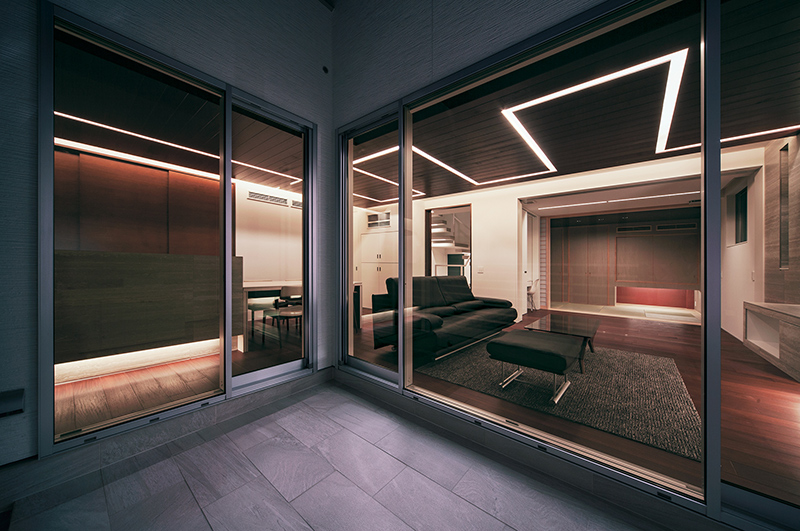 This is how the interior of the house looks like when viewed from outdoors during the night. Yes, the furniture look lovely but the lights really standout. We can even see the staircase lighting too! 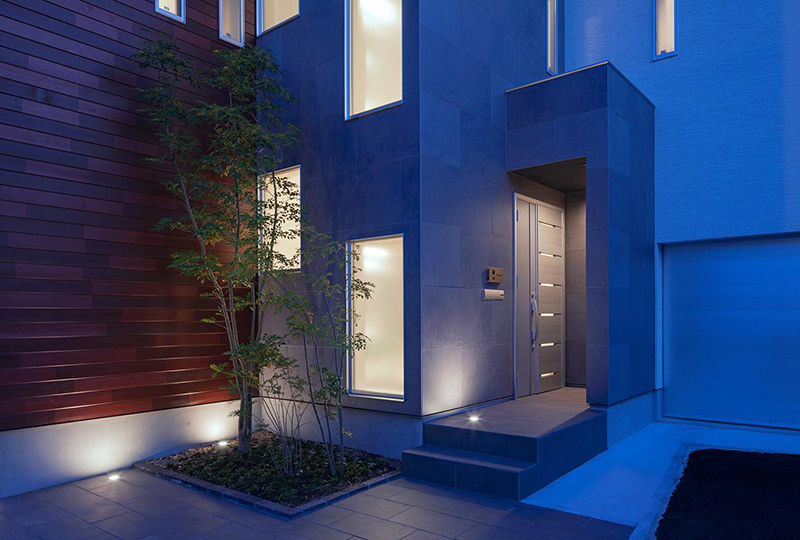 Outdoors, there is a small area where some plants can be seen and it is lighted as well. It is a nice break from the sleek lines of the floor tiles in the outdoor area of this modern house. And by the way, I love that door! 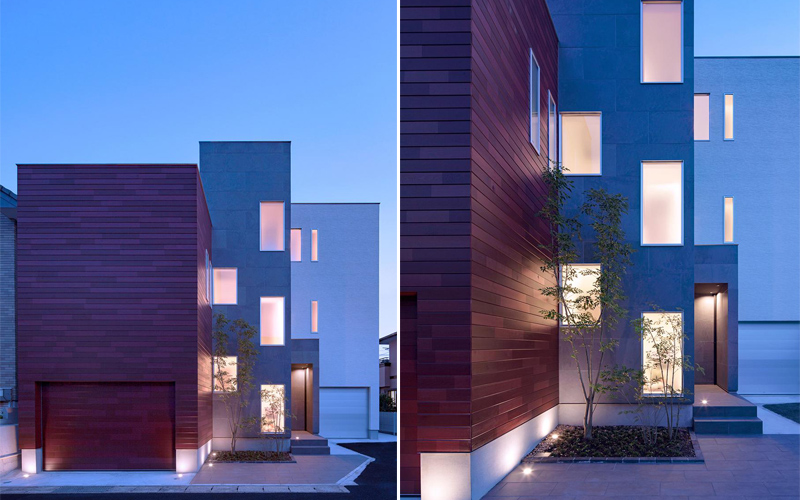 During the night, the play of lights makes the house very beautiful and eye-catching. Aside from the lighted interiors as seen from the windows, the lower portion of the building with bricks also looks interesting because aside from being painted with white, it also has lights on it for emphasis.

What can you say? I know that the lights used for the home is indeed unexpected but you see, you can always do something unique for a home to upgrade its appeal and beauty just like what you have seen in the above images for Y8 House in Nagasaki. The interior of the home is also nicely designed with minimalist style. This apartment is designed by Architect Show Co. who did an amazing job especially with the way the lighting was added in the area. Aside from the famous snake light of the home, the exterior and outdoor areas were also lighted really well. Indeed, everything is just a matter of creativity!

Before and After: His-Her Home Office and Living Space Redesign