A contemporary home has a beautiful steel screen facade.

The facade of a house has a great impact to the entire home because it is what meets the eye at first glance along the street. It could also contribute to the curb appeal of the house. That is why, home owners as well as designers make sure that the facade will look beautiful and would bear unique features if possible. We have seen many homes that has stunning facades and we are going to show you another one today for a home called Gardenia, which is a remodel and expansion of an existing residence in San Juan, Puerto Rico.

The remodeling and expansion of Gardenia was developed for a family of four members. The site of approximately 1,270 m2 is located on the highest point of the street of a well-known suburban housing development in San Juan. Part of the city is visible from the second floor on the east side of the house. Some of the objectives of the project included taking advantage of the topography, responding to existing views, and maximizing natural ventilation and light. With that, Diaz Puanetto Arquitectos worked to expand and open the public areas to the west facing the street, which allowed them to create a new image for the house and a more continuous and ample space, as well as establishing a better connection between the interior and exterior spaces of the house. The concept for the remodeling and expansion was focused in opening the interior and exterior public spaces by creating a floor plan that allowed for a more fluid movement through the space, better illumination and spatial amplitude. For the facade, it added a corten steel screen which made it look very beautiful! Scroll down and take a look at the house below.

Unique feature: A house remodel which turned out really gorgeous with the added decorative screen made of corten steel.

Similar House: Cloud Bay Shack- A Winery and Guest House in One 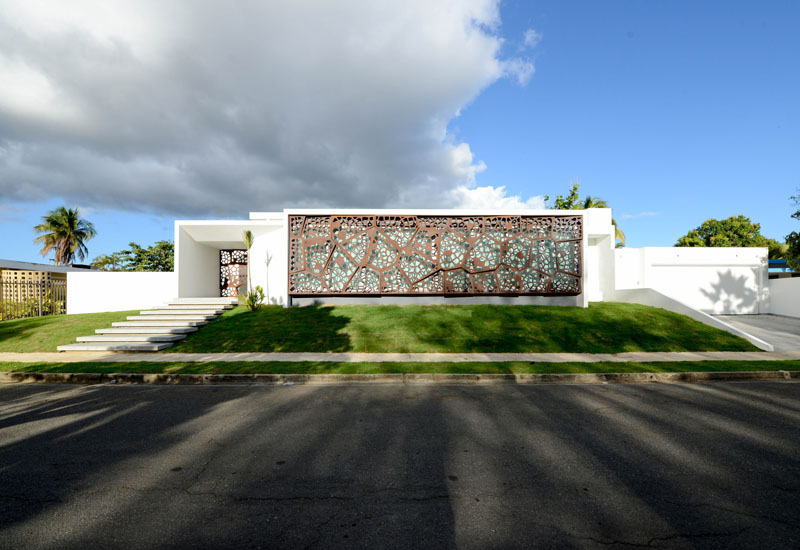 The main facade of the house is facing west. But instead of looking at it as a problem, the designers decided to turn the problem of direct afternoon sun heat and light into an opportunity to create an element that gave a distinctive character and a new identity to the residence. 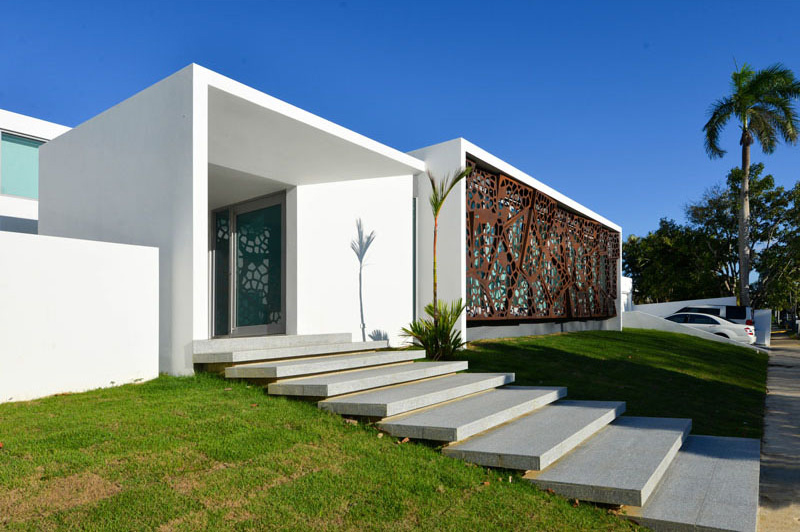 In this sense, the designers proceeded to create what could be perceived as a sculptural relief made of a long-lasting material that could serve as a sunscreen and to give privacy. The screen can be seen not just in the exterior but also in the interior as well. 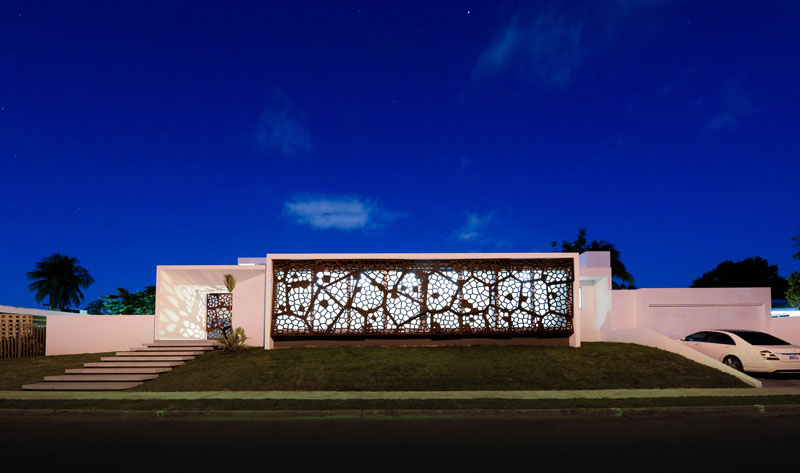 The cellular sunscreen, contextualized in reference to the homeowner’s medical profession, created an organic array made of weathering (corten) steel which generates a tridimensional pattern. 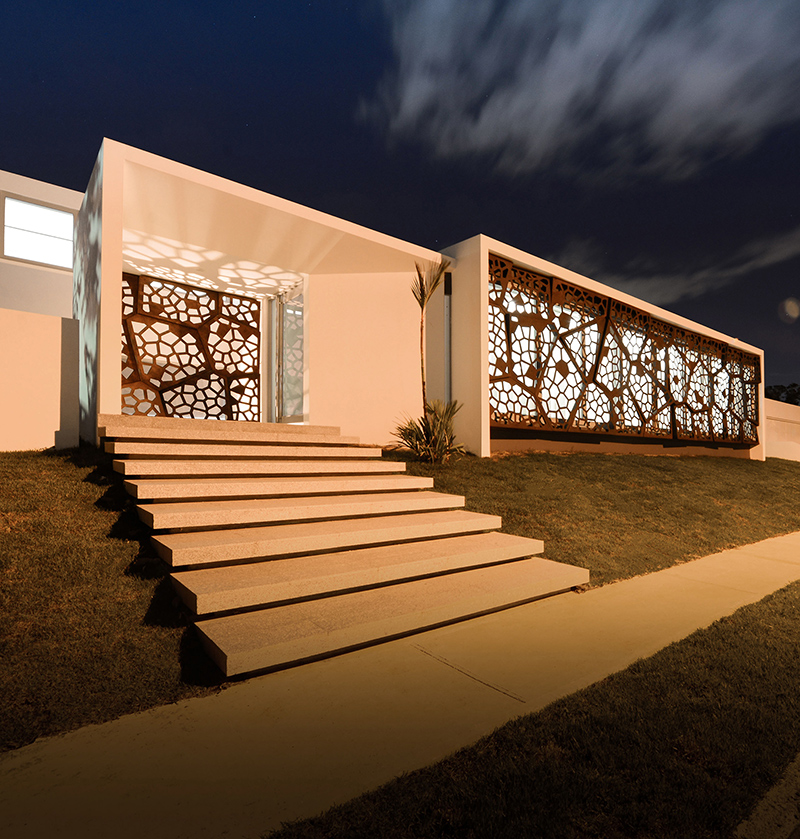 Although initially designed by hand with an intuitive cellular pattern, the screen was drawn upon parametric programming technology which helped to develop the precision needed in order to laser cut at a metal workshop. Accuracy was also needed during the on-site assembly. 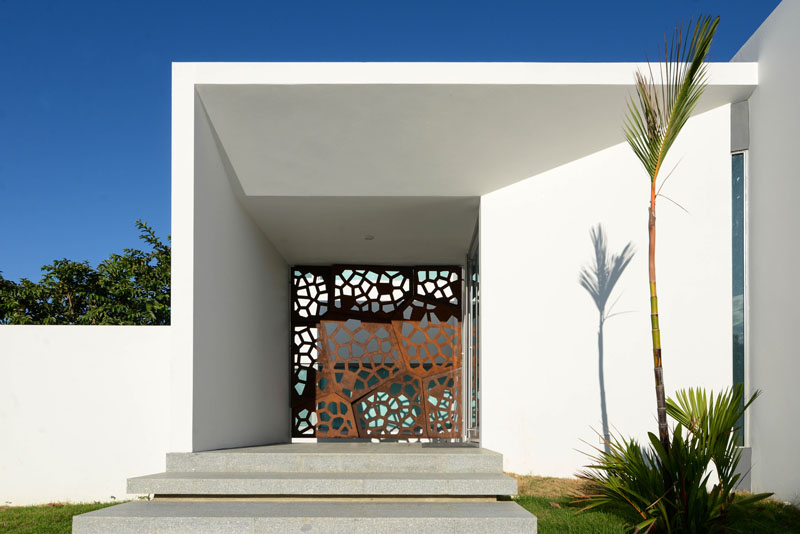 Concrete is used as the main construction material and the white color which is present in the original structure was also used. Glass and weathering (corten) steel dominate the architectural language of the house.

Read Also: Nettleton 198- A Modern Home by the Sea 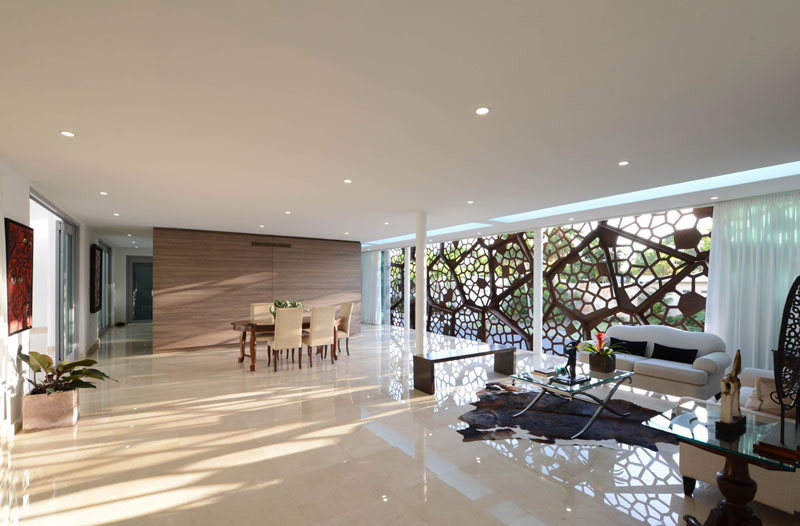 This sunscreen creates a play of light and shadows in the interior, which helps define the spaces through the constant light changes and projections. It looks nice in the interior, right? But even if it didn’t use a screen like that, the interior is really well designed. 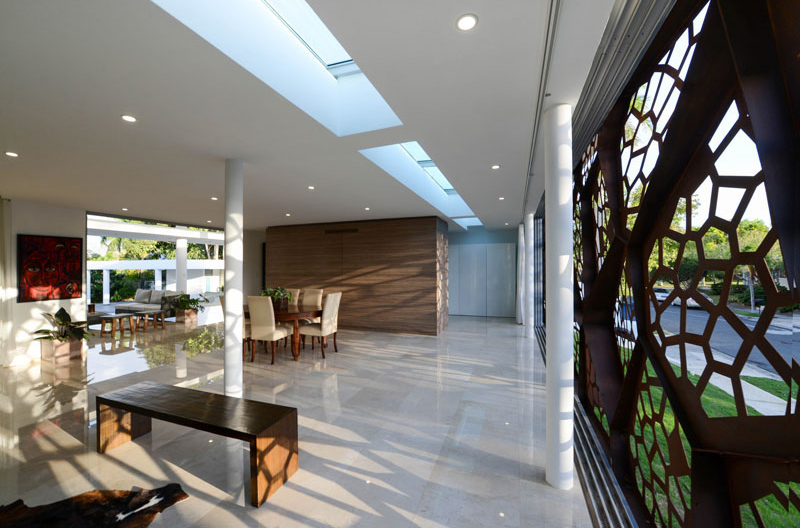 Beautiful contemporary furniture is used in the interior of the house. What adds natural light to the space is the skylight on the ceiling.

Seen here are the other areas of the house including an outdoor living area on the porch and the steps that leads to the green lawn of the house.

If you think the house is just a mere rectangular structure, you are wrong. On the other side, it experimented more with shapes and forms and it turned out really very impressive!

Now this is how the corten steel screen looks like during the assembly and installation. You can tell that it really needs precision and accuracy to perfect everything!

The decision of the Diaz Puanetto Arquitectos to add an artistic screen to the facade of the remodeled home is indeed right because aside from being a sunscreen, it added appeal to the house and made it look extremely unique from its old design. This is indeed a lovely element in the house and this made me think that we can actually fabricate screens like this using steel. It really takes creativity in order to come up with a stunning home design. What can you say about this house?

A Modern House Encounter of a Lithuania Family House

Intriguing Descriptions and Patterns of The Heritage in Sydney, Australia

The River House: A Tranquil Modern Home in Washington