You'd be surprised on how screens can actually look beautiful for the home.

Some homes make use of screens in order to add privacy to their dwellings and to control the amount of light that gets into the home. This is usually used by those whose location catches direct sunlight or are near the streets. But for whatever reason they would do it, it wouldn’t look appealing if you just use the usual screens. Well, in classic times that would be accepted but for modern designs, it would totally not be accepted anymore because of the huge number of materials and choices that are available in the market. We have seen many homes that made use of screens for their exterior and I know that it totally changed your idea about using screens for the home because it also made me realize that even screens can look lovely.

Today, we are going to show you a home designed by Joao Tiago Aguiar Arquitectos. While renovating a house in Lisbon, Portugal, they decided to add a contemporary white artistic screen to the rear of the home. The main area of intervention was the rear part of the house, which was completely redrawn. Searching for a contrast with the main façade, the designers envisioned a fascia, opened by a series of windows and shutters resembling a pattern of traditional Portuguese tiles. This pattern works like a skin that filters the sun light and also protects the house from intruders. In order to give the top floor more habitable space, they created a mansard roof with three openings. At the ground level they transformed the ground floor in one unique living area, joining together the entrance, the living room and the kitchen. A white volume coated with grate lines, disguises an area of a closet, social toilet and storage. This central core also performs a separation within spaces. The first floor included a private area, where the rooms are located as well as a suite. For the attic they idealized the mansard roof to give us the possibility of more livable area. With great view to the garden, is a bed room, a toilet and an office. Take a look at the house below.

Unique feature: Instead of ordinary screens or other materials, this one used a beautiful white patterned screen for the rear part of the house. 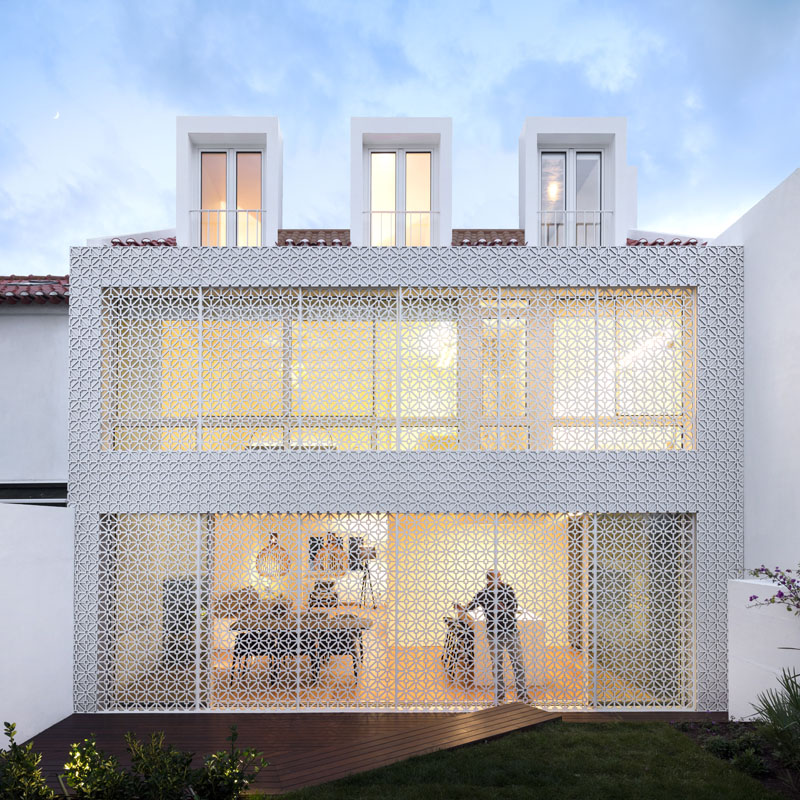 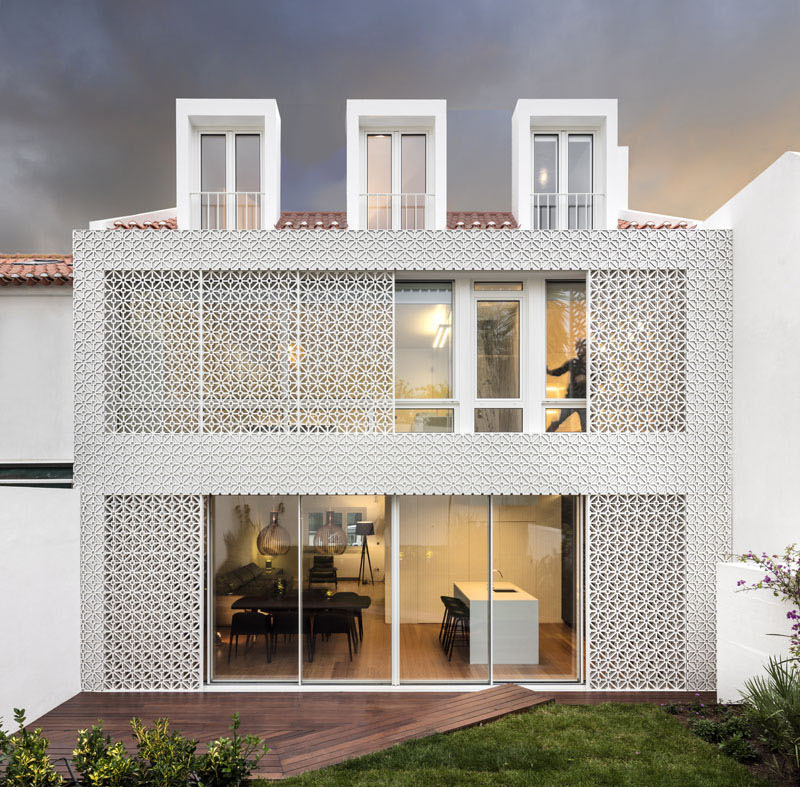 The pattern used for the screen resembles traditional Portuguese tiles. This allows the screen to filter the sunlight into the home, as well as it provides additional security and much needed privacy while alleviating the home’s exterior appeal. 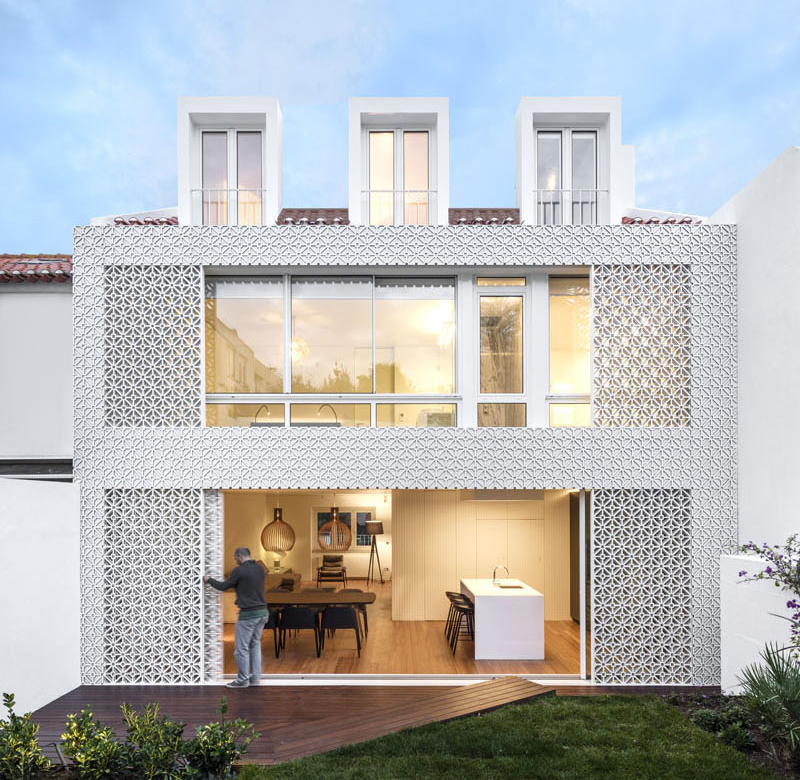 The screen can also be opened to let the interior spaces have direct access to the landscaped backyard and this is how it looks like when the screen is open both on the lower and upper level of the home. 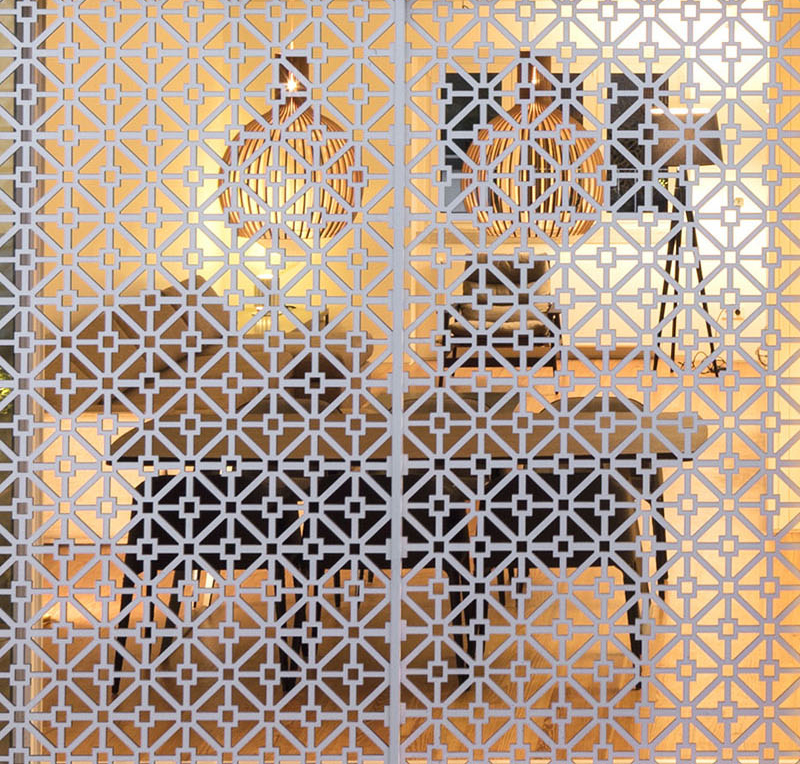 Behind the screen is the dining area. Yes, even with the screen, we can still take a look at the interior of the home which is really nice. But of course, it isn’t as clear as it is when the screens are open. 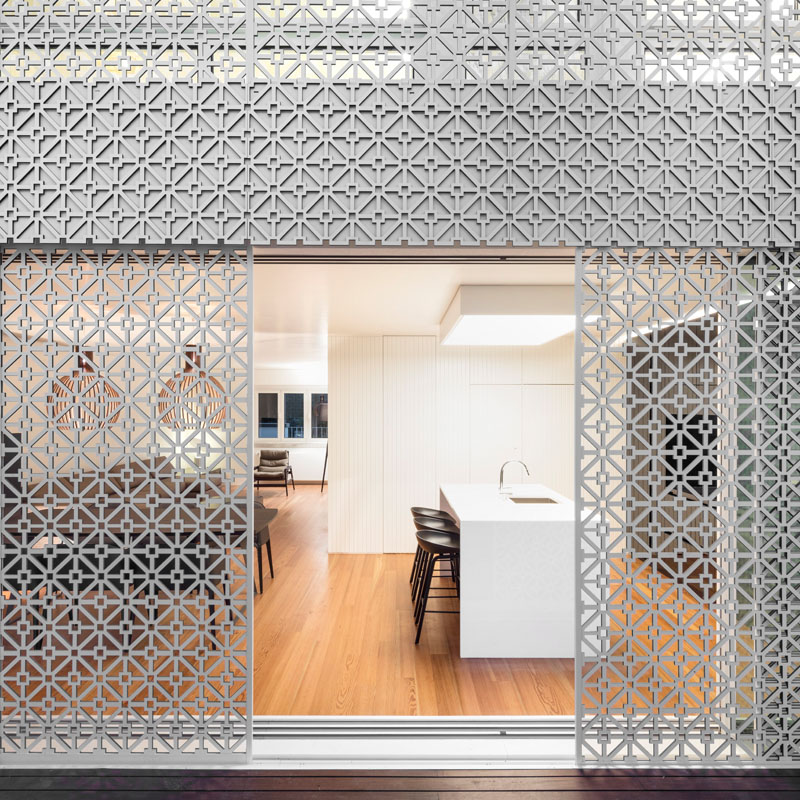 And when that screen is opened, you can clearly take a look at what is inside. You can notice that the home has a neat interior inside. Seen here is a glimpse of the kitchen, dining and living areas. Notice that there is a nice contrast of colors used in the interior of the house which looks good with the wooden flooring. 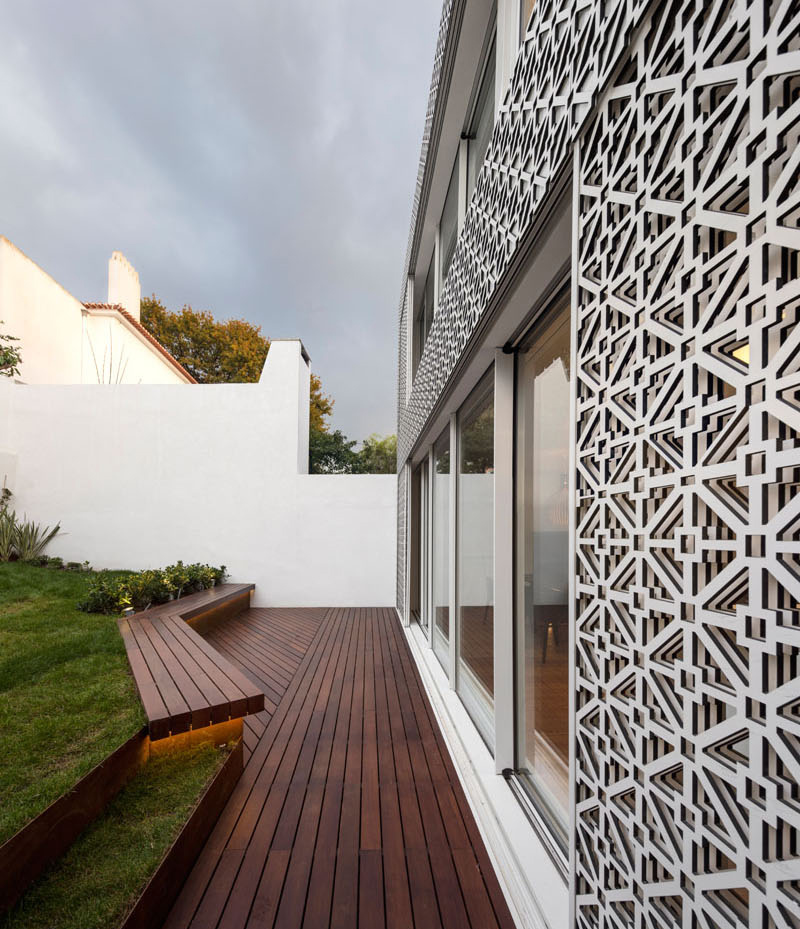 Also found at the rear part of the house is a small courtyard garden. You can see that under the wooden bench there is lighting and we would know how dramatic this one would look like during the night. This part of the house can be accessed through the sliding glass doors when the screens are open. 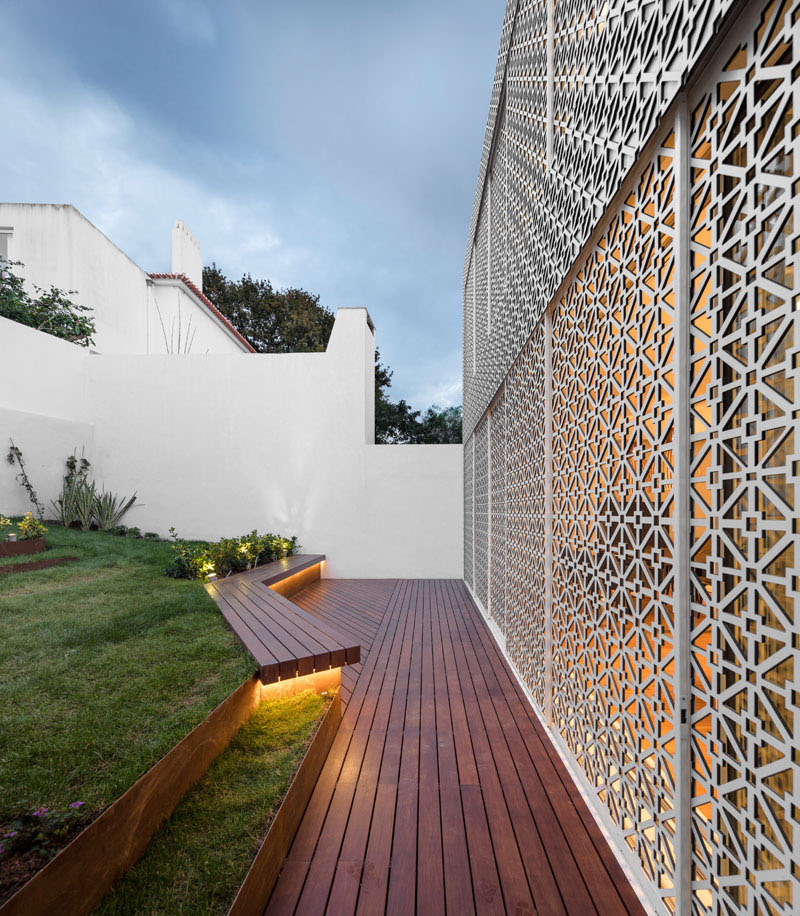 This time, the screens are closed and we can see the dramatic appeal of the interior when the lights are on. It looks like a giant lamp during the night! It is also a nice idea that the lighting is carried to the garden of the home. I also like it that the wooden flooring for the deck is seemingly extended to create a bench where one can relax while sitting under the skies. 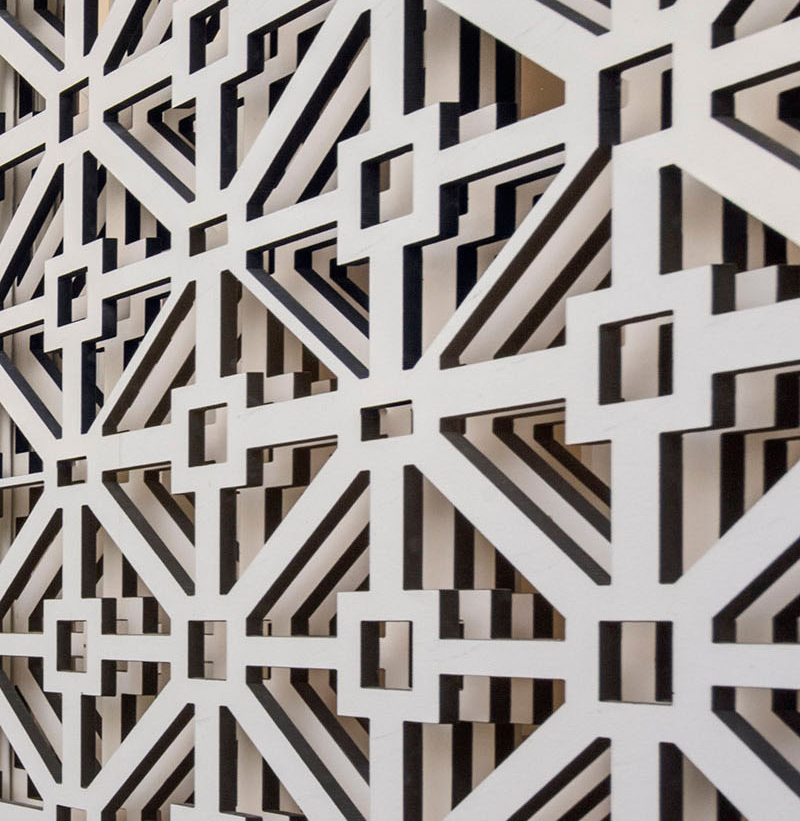 And this is the screen. With a closer look at it, you are given the idea of how the patterns look like. You can just imagine how intricate and complicated it would be to make this one! But of course, the result is so worth it!

Isn’t it amazing that screens can actually look this stunning? For sure, you were amazed by how this one turned out because apparently, it is very much unexpected but hey, Joao Tiago Aguiar Arquitectos managed to give the rear part of the home a beautiful and unique design. This is something that other designers can also apply to their own homes as well. And as you can see, even the interior of the house is well designed to give the homeowners a cozy and comfortable living. What can you say?

Balanced and Unexpected Concept of the Flight House in California

Shirley Road House: A Lovely Contemporary Addition to a House in Massachusetts, USA