Platypus Bend House: An Elevated House with Rainwater Tanks Underneath

The house is raised off to avoid flood but look at what they added under the structure.

Building a house isn’t just about how it looks but everything in the surrounding has to be considered as well to make sure that the homeowners will get a comfortable way of living and that they can also preserve their own dwelling. That is why, it is very important to consider different factors from wind, sunlight, rain and even flood. Some homes are raised from the ground to avoid being hit by flood. Still others would add a flood room so that there is a space where water would go.

A house in Pomona, Australia is built on the flood zone and is therefore raised off the ground. The Platypus Bend House, which is how designers Robinson Architects call it didn’t only avoid flood in its design but it also has sustainable features in it. The house sits on a 35 acre site which is a site with the size of a football field. Despite being so spacious, the area is very prone to occasional but significant flooding especially during seasonal tropical downpours. By raising the house off the ground, the self-sufficient home is able to house rainwater tanks in the space underneath it. For the home’s self-sustaining water, it includes water being collected in rainwater tanks, as well as solar hot water, and an onsite waste water treatment system. Let us take a look at the design of the house below.

Unique feature: To avoid flood, the house is being raised from the ground and under it are rainwater tanks as well as a solar hot water and on site waste water treatment system.

Similar House: KL House: A Contemporary Home in the Forest in Quebec, Canada 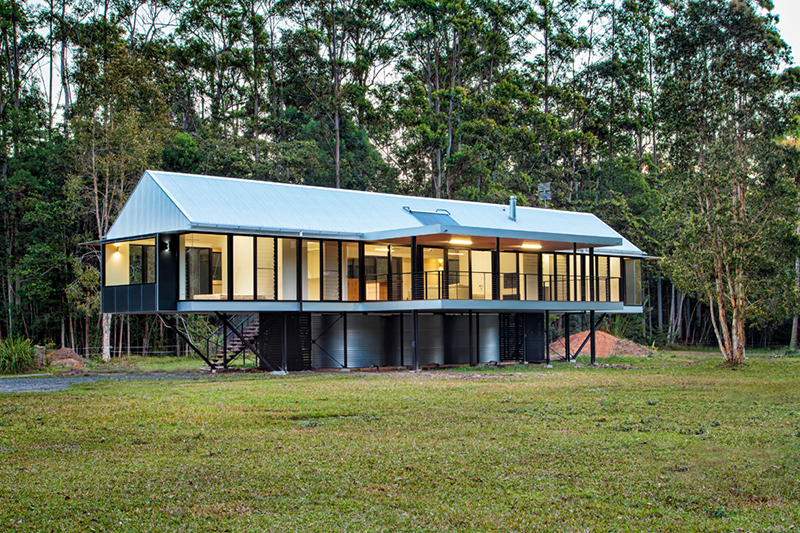 At first glance, you might think that this isn’t a house but a commercial building because of its industrial appeal. But if you look closer (since we can see it because of the glass windows), there are appliances and furniture for a home which means that this is indeed a residential building. 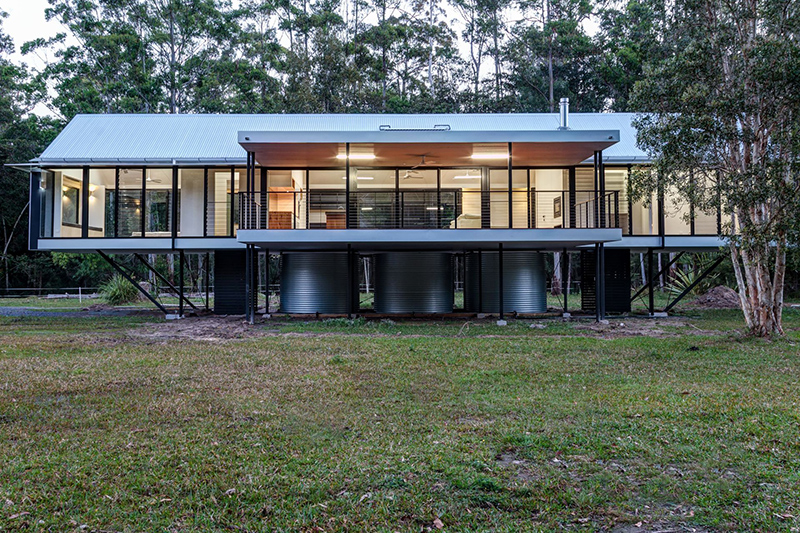 The house has water tanks under it which we can clearly see in this photo. I can say that it is a good way to use the available space under the house. And it also provides water to the house as well. 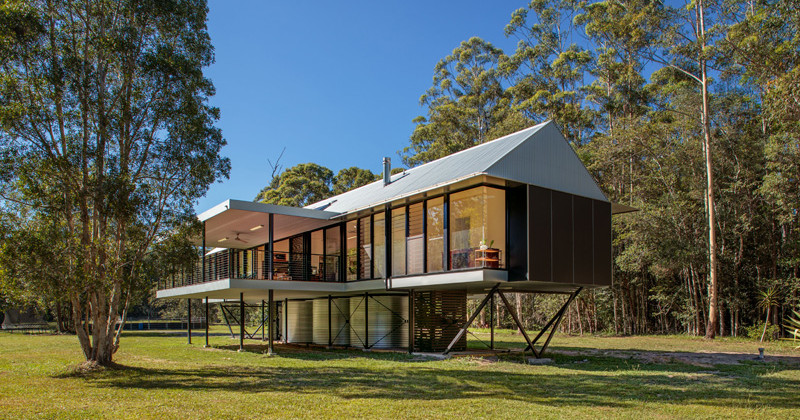 The house is surrounded with glass and features contrasting colors of black and white. With that glass walls, the interior of the home is transparent and I can tell that during the night, this would look like a huge lighting sculpture because of the glass around it. 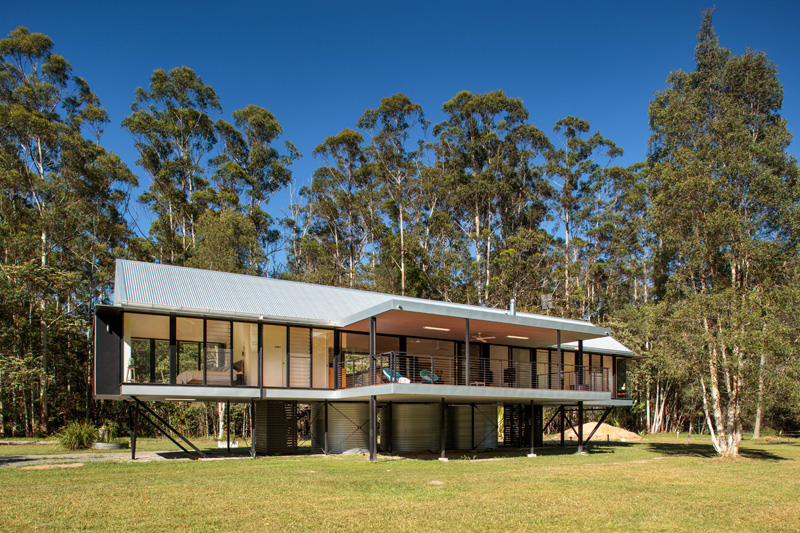 From the interior, one could access the balcony which is extended from the house, surrounded with steel railings which add to the industrial appeal of the structure. It also used the same material for the other parts of the home. 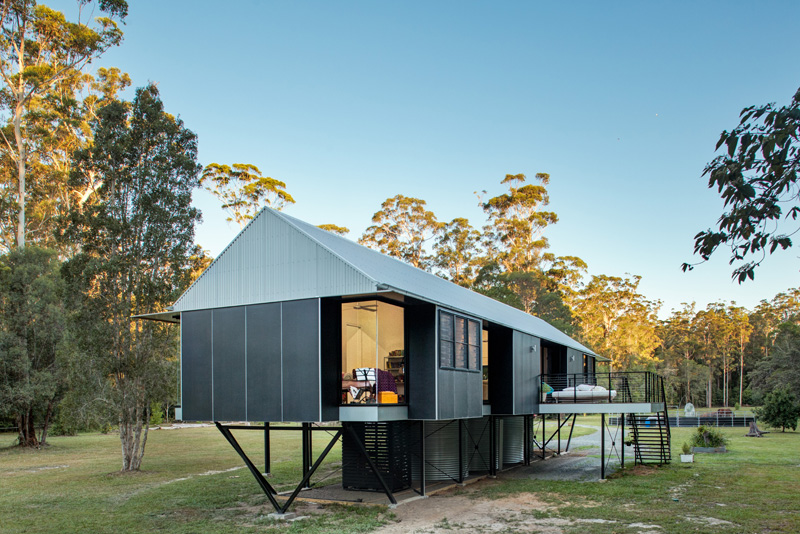 Although it used glass for most part of it, you can see that there are opaque areas. I am not certain of the material used for that part but we can see that it used corrugated sheets for the roofing that has a simple pitched roof design. 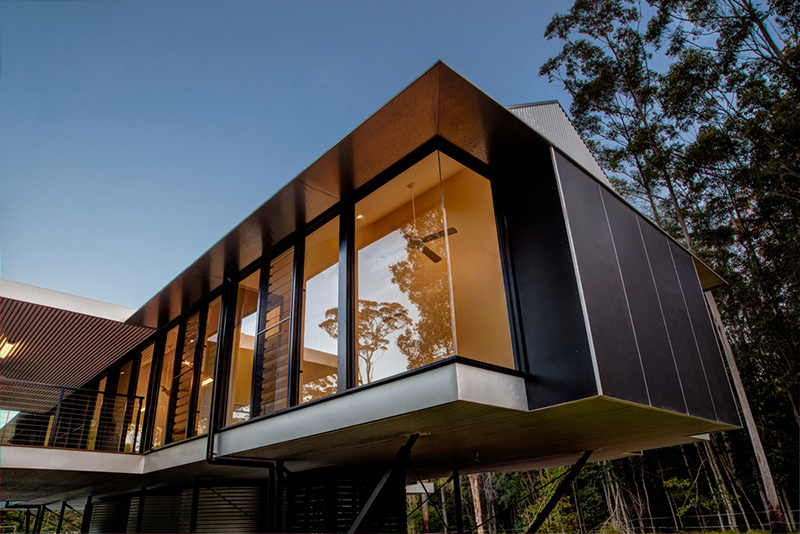 A closer look at one part of the exterior where a glass window on the corner is left frameless. You can also see that aside from the fixed glass, it has some parts with jalousies to control the amount of light and air that enters the home. 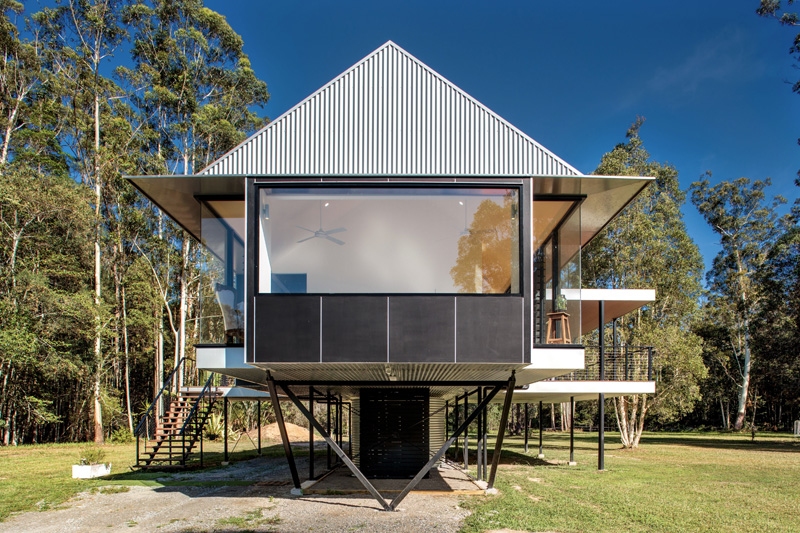 Despite the simple design of the house, it looks beautiful and sophisticated because of the mix of materials. Also, the huge plus factor of the design is its being sustainable and its consideration to nature.

Read Also: Impressive Design of the Concrete House in Melbourne 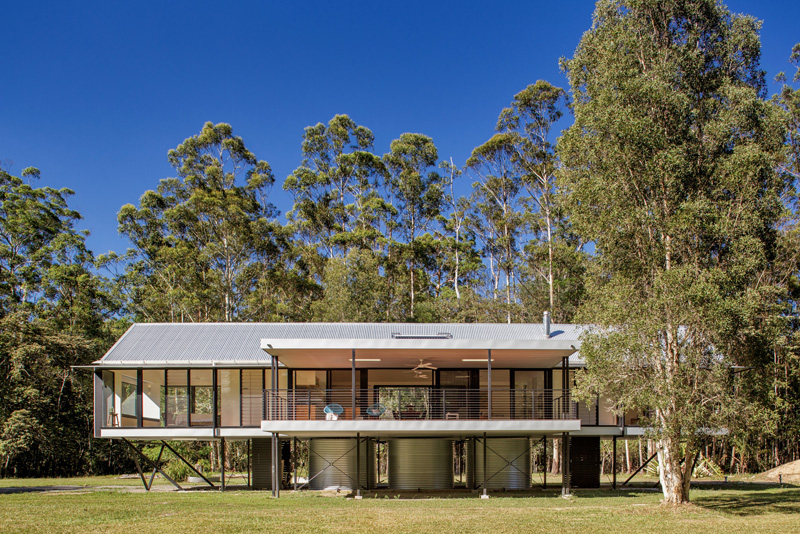 The location of the house has tall trees around it which could bring shade to the home. The way I see it, the house is fresh and breezy because of the trees. Aside from that, it also adds to the home’s overall appeal. 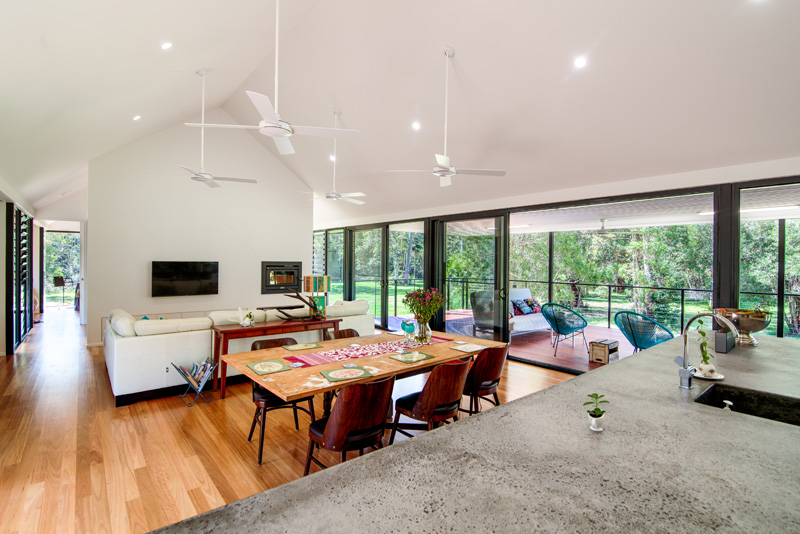 The interior of the home features wooden flooring and high ceilings painted in white just like the walls. Its living areas have been kept open with a vaulted ceiling, which also helps with keeping the home cool. Its open layout allowed a dining area and kitchen area to be located just near each other. 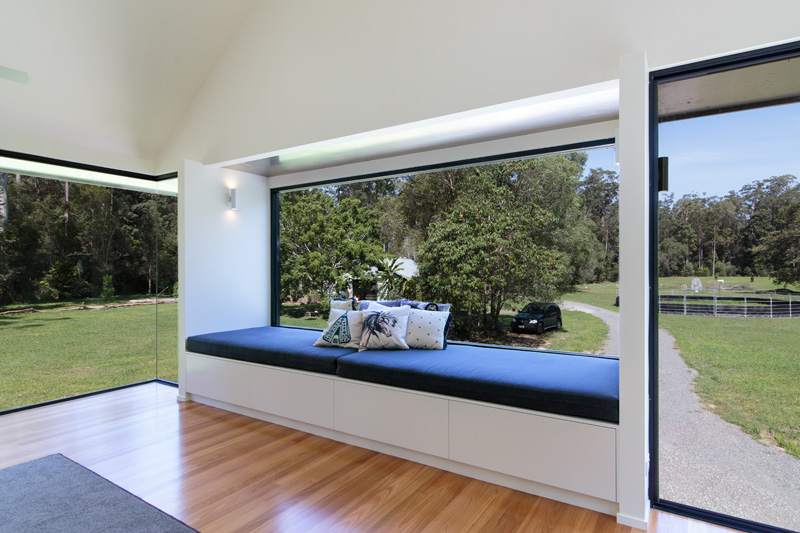 Inside the house, there is a large window seat, which is sure is a perfect spot for viewing the surrounding nature from the elevated perspective. But yes, you can actually see the surrounding in many areas of the house because of its glass walls.

Even if we have seen only a few images of the interior, we can still say that the house is indeed well-designed especially that it made good use of the available area and it also used natural materials as well. Of course, what I like most about this house designed by Robinson Architects is its being sustainable with self-sustaining water located under the house. And it is also nice that the house is designed to protect it from flood. Aside from that, the design of the home’s exterior is very lovely too with an obvious contemporary appeal. What can you say?

The Unou House of Japan - A Home by the Train Tracks

Platypus Bend House: An Elevated House with Rainwater Tanks Underneath