Have you seen a house with concrete decorative blocks on the facade?

Sometimes, being the same with the rest would be boring and totally not cool. Although some people are already being happy that way, others aren’t. That may be true in different aspects of our life but it can also be true for home design. Just like a row house or maybe a subdivision wherein the homes look the same. Some would live in that house for years without changing anything but others would prefer to change its look not just to have a fresh atmosphere but also to customize it according to their needs and lifestyle. Aside from the interior, the exterior of the house can also be changed as well. We have already featured my home updates but this one will surely make you admire the house because of what the designers did to its facade.

In Vietnam, there is a row house that is covered in red bricks. If you look at it, it is really like most Asian row houses but one homeowners wanted to be different. And they decided to be not just “different” but to totally stand out from the rest of the house by adding a skin of white concrete blocks on its facade. The house used a simple material for the exterior of the house which is even unexpected for some. But I know that once you see this house, you will realize that the concrete blocks can do more than just add to the structural foundation of the house. It can also work well as an added decor to the entire home. Intrigued? Let us take a look at the Cocoon House below.

Unique feature: A stunning exterior that used a simple material- concrete blocks. Who would think that it could change the entire home and let it stand out from the rest of the row houses?

Similar House: Before & After: Impressive Modern Transformation of a Commercial-Residential Building in Thailand 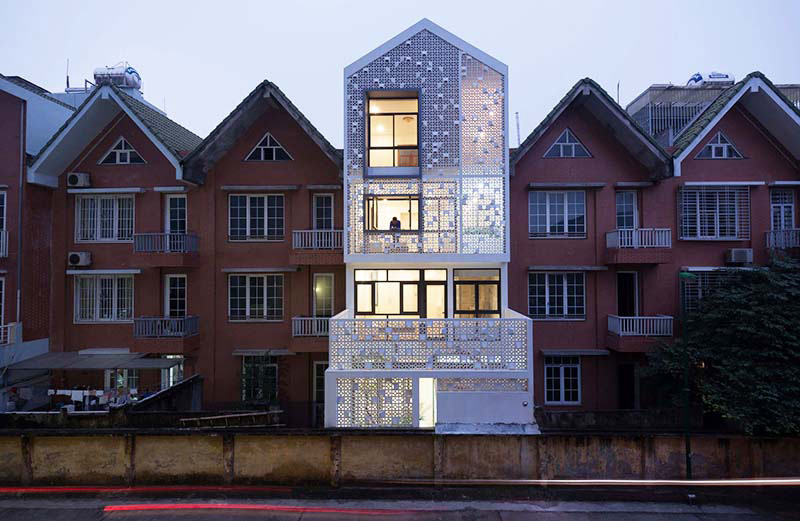 I am sure that at first glance, your attention will be brought to the white house since it is the only house in the area that has a different facade while the rest have the same designs. Well, that is a common sight in Asian homes especially that only a few homeowners would think of updating their spaces. But the owner of this house has a different mindset and wanted to be different. 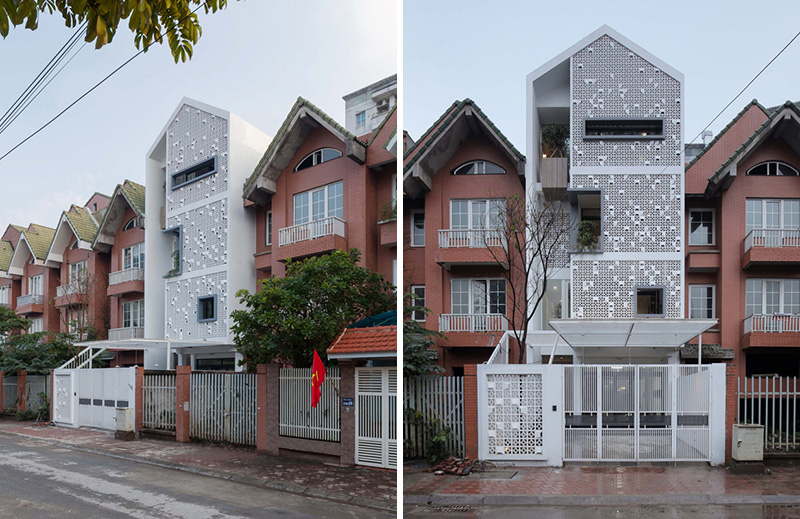 When viewed from the street, the house really stands out. Even its fence design is unique and is totally different from the other houses. I actually think of a lace or some doilies when I first saw this because of the intricate design of the facade with the white color. 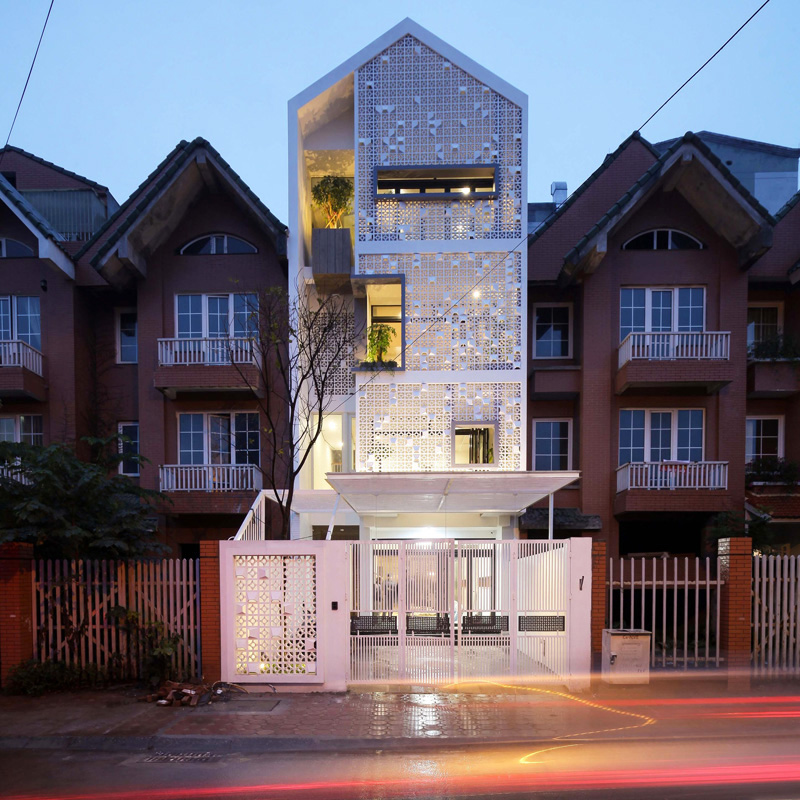 When night time comes, it looks even more beautiful because of the lights from the interior which makes it appear like a giant lighting fixture. By covering the home with the blocks, the house not only stands out from the rest of the row houses, but also provides some added benefits it. 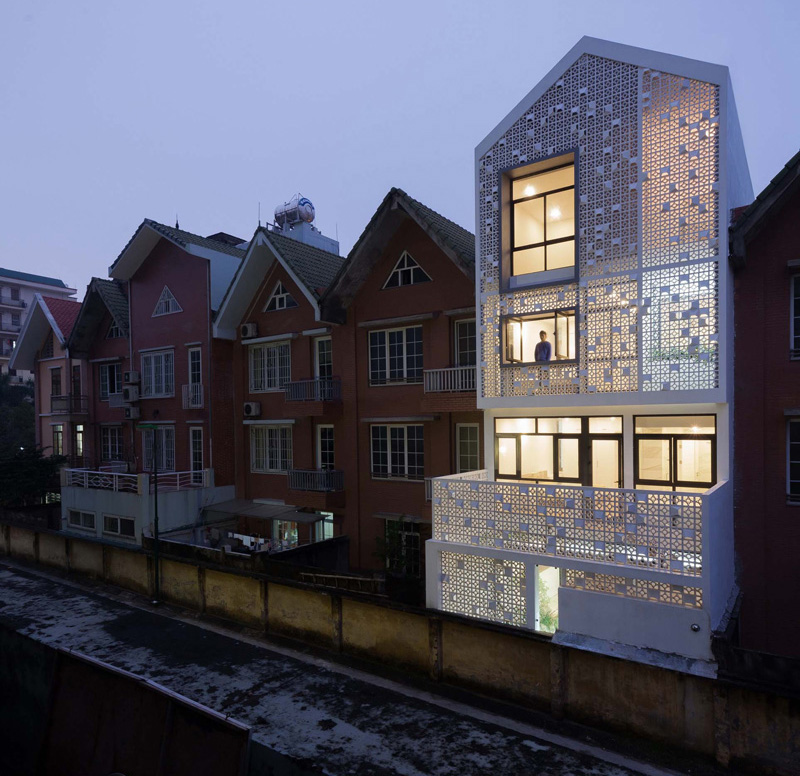 We have mentioned that aside from adding beauty to the house, it also offers main benefits to it like additional privacy for the home owners. Aside from that it also allows natural light and air to pass through. 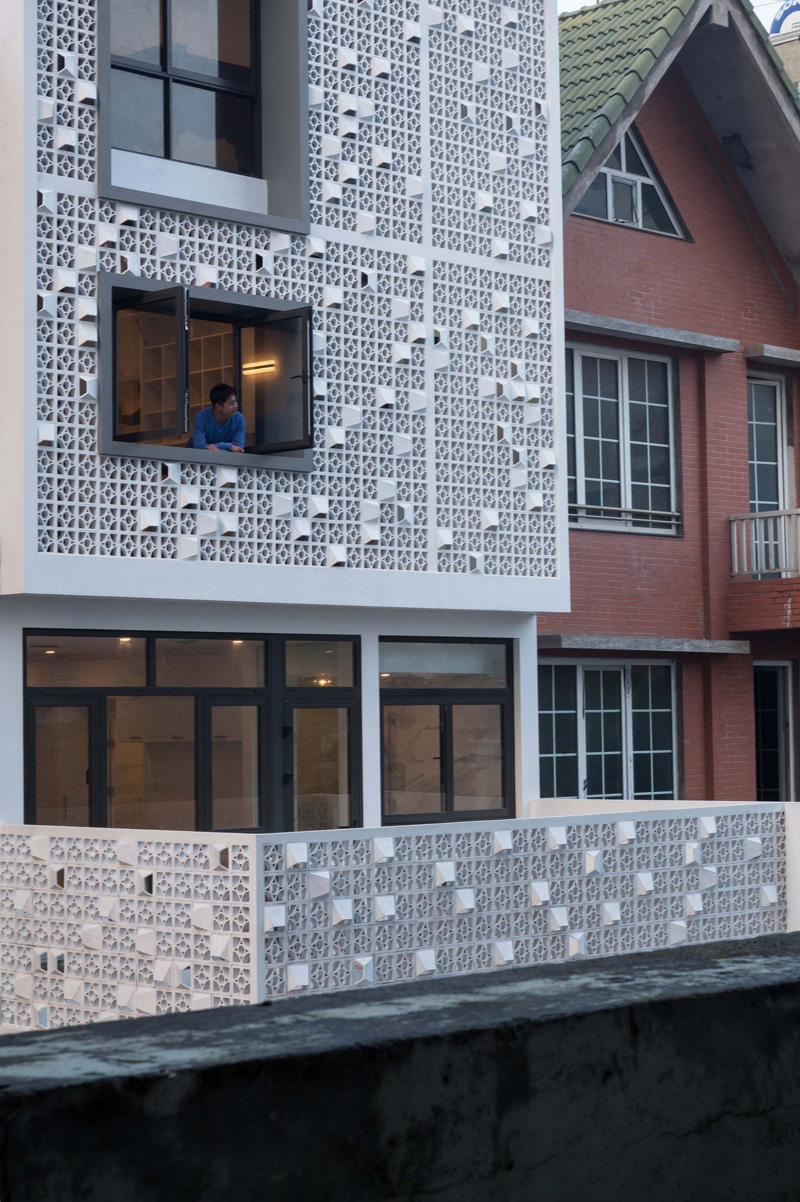 A closer look at the concrete blocks that also provide a decorative and artistic element to the home. It is also a good idea to use white for the exterior while the window frames have gray concrete around it. 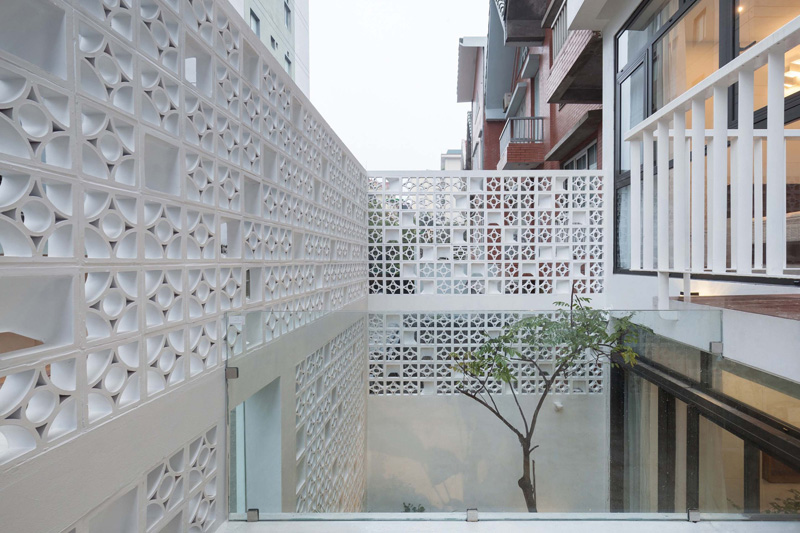 Behind the concrete blocks on the lower level of the house, one can see spaces for a private garden. The blocks could also help shield the area from rain and protect it from too much sunlight while allowing natural light to get to the area. 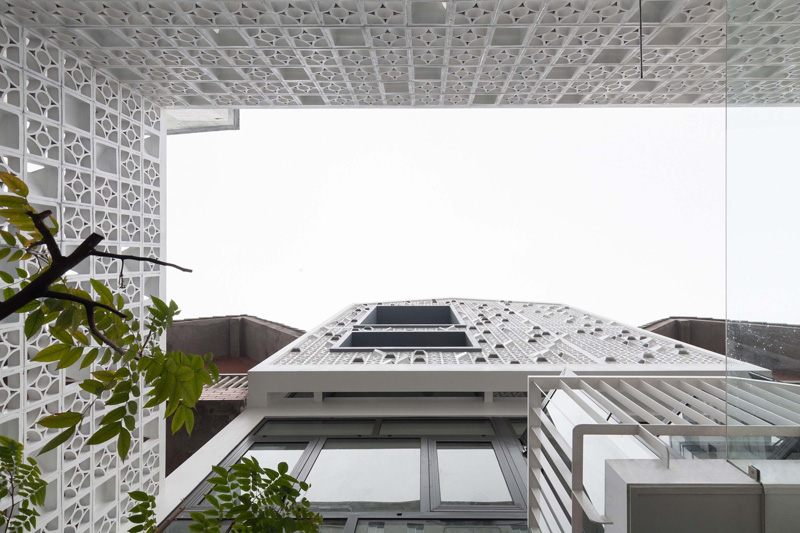 Imagine yourself standing at the lower area. This is the view while looking up from ground level of the home. Isn’t it nice? 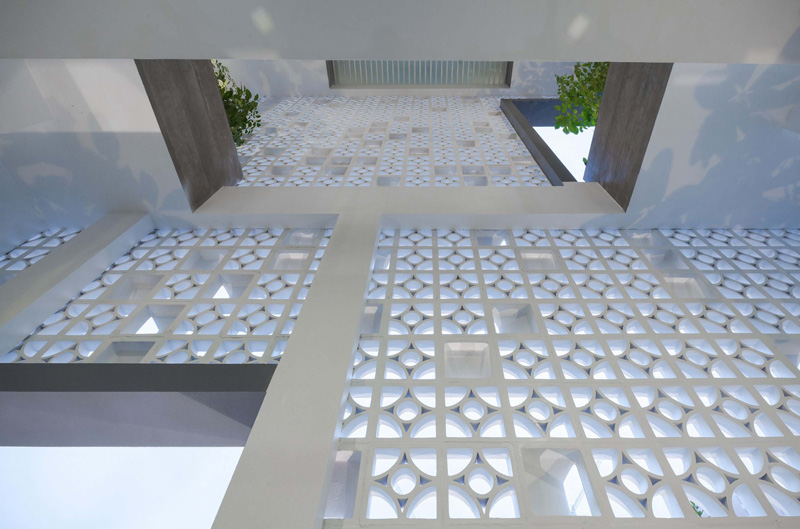 Another photo of the blocks when viewed from below. I like the design of the blocks used here and how it looked when combined together. Aside from that, I also like the plants that peep from the planters from above. 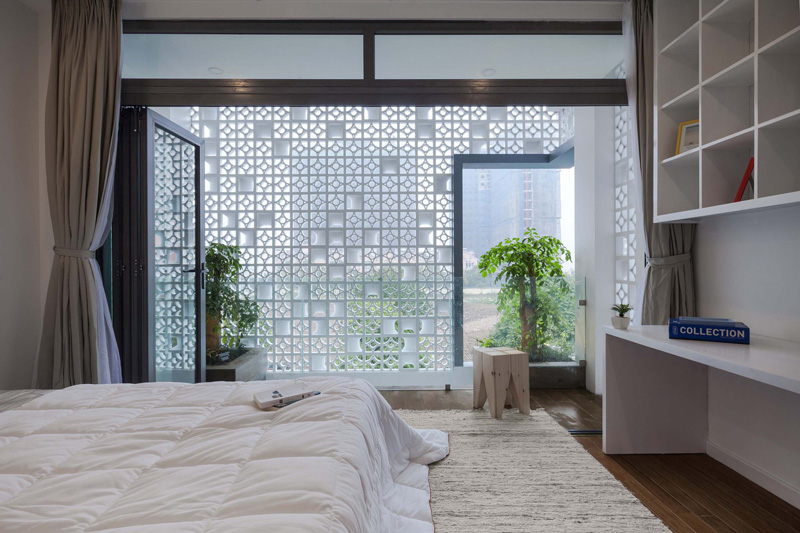 Seen here is the bedroom with a white comfy duvet and an area rug that defines the space. Aside from that, you can see that the bedroom opens to a small balcony wherein you can find the concrete blocks which provide a little more privacy and beauty to the area. To access the balcony, one would pass through glass doors which can also be covered with drapes when more privacy is needed. 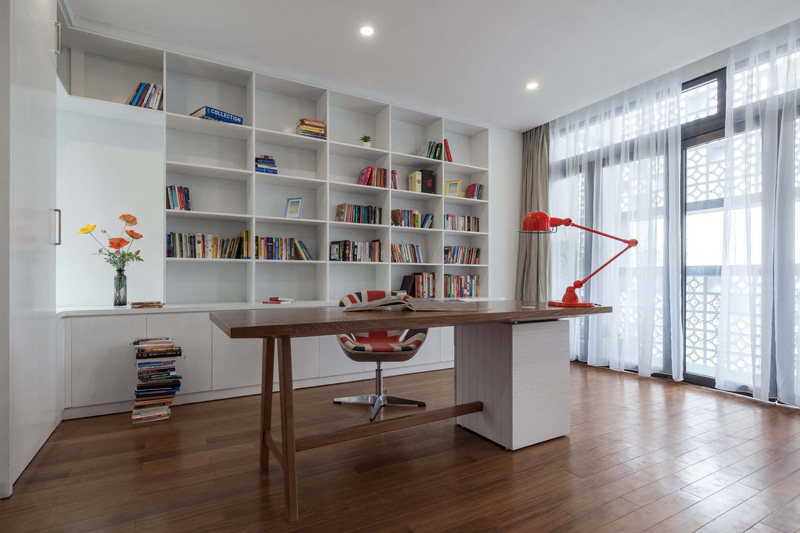 This one is the home office. Instead of using curtains to block the light, what are used here are sheer curtains which look really nice too. Notice also that it used a lovely office chair paired with the wooden table. A wall of shelves stands on its backdrop with many creatively arranged books.

Isn’t it nice? This house shows us and tells us that even with a simple material, you will be able to come up with a house design that you will love and will even make your home unique. Like whatLandmak Architecture did to this house. Well, I can say that it doesn’t need a house number anymore because the design sets it apart from other homes and it is very easy to identify. Another thing that this house could tell us is that you don’t have to stick with the old look you have just because the rest of the homes near you are already happy with the look of their houses. You could actually be unique too if only you really want to!

20 Rad-Looking Red Chairs in the Bedroom

Relaxing and Extravagant Amenities Offer in Villa Criss-Cross in Slovenia