Beautiful Casa Jura Home in a Hillside in France

A modern home that blends with the hills will no doubt blow your mind!

Wherever your house is located, it is always important that it suits the way you live and it has a design that isn’t merely for aesthetics but is also to ensure a good living with function and usage. We have seen many homes like this that considered beauty and function together which is of course very important. Aside from that, it is best to adapt to the environment in designing a house so that we do not ruin nature. Instead, we would feel like being part of it!

What we will feature today is a house designed by JDS Architects that appears to blend into the hillside. Yes, the designers were able to create a home that looks like part of the hill located in the village of Bois D’amont, France. This home called Casa Jura is backed by a forest covered hill, and it faces the valley for picturesque views. Meanwhile, it has a beautiful white interior with a color palette of red and grey. It also made use of glass windows around it too for more light to enter the area. Now, let us take a look at the house below.

Unique feature: A modern house that is designed to blend with the hill where it is located. It features curvy details on the facade and can be accessed through the slopes of the hill covered with grass. 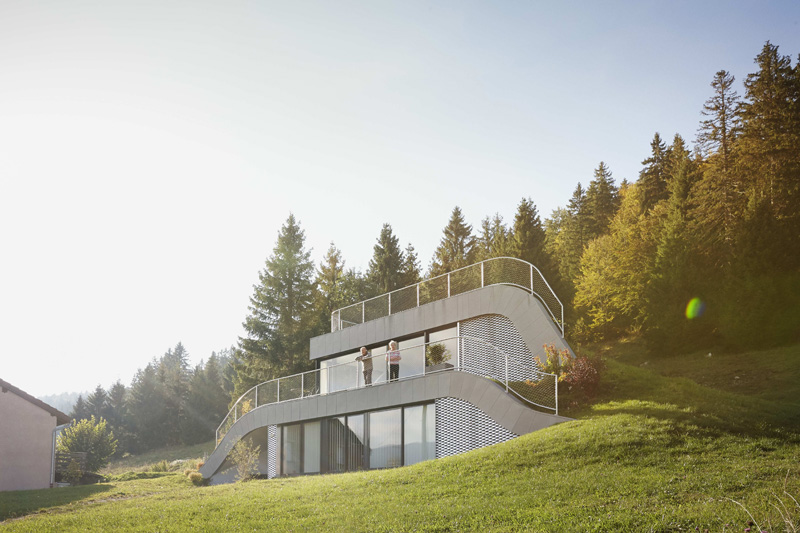 At first glance, the design of the house is already intriguing. Aside from the glass walls and steel materials, it also has that curvy part on both sides of it. In truth, some might even compare it to a ship! 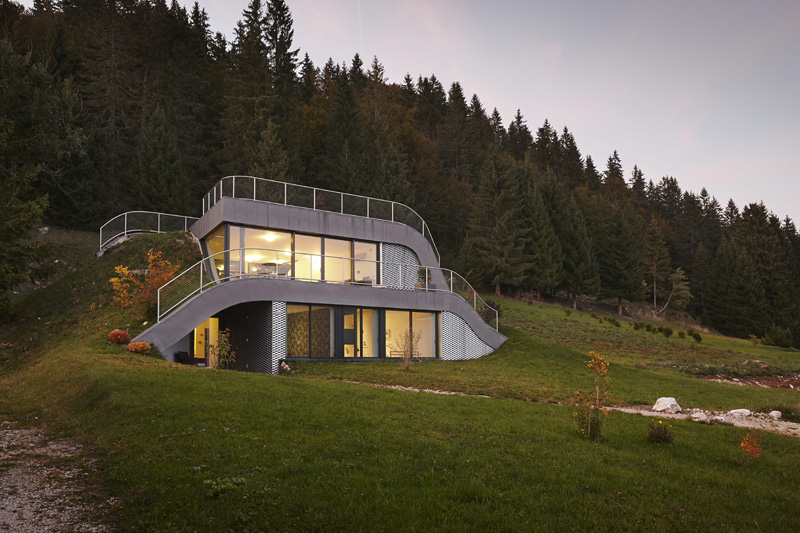 But of course it isn’t a ship. Just look at how the different levels of the house are added based on the slope of the hill. Yes, the house is blended with the hill! It is a good idea to add curves to its facade to mimic the look of a hill. And with the lights on, it looks even more beautiful. 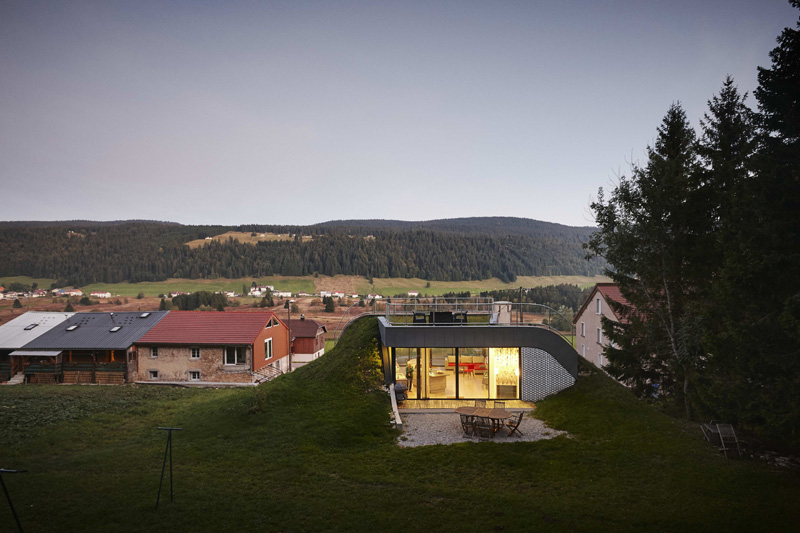 What you can see here is the upper part of the house. It used glass that made it appear transparent. Above this area is a roof deck with a little garden courtyard. 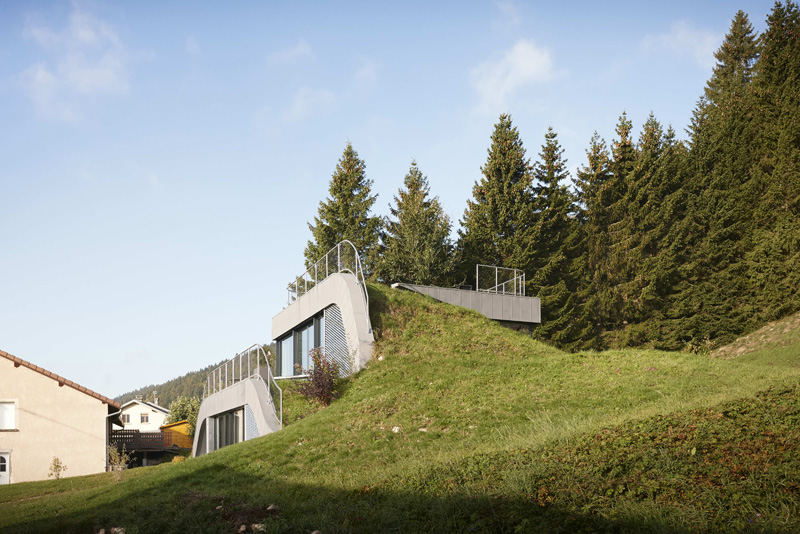 To access the house, one will walk through the green grasses of the hills. Definitely a wonder of architecture indeed! I love what they did to this house. 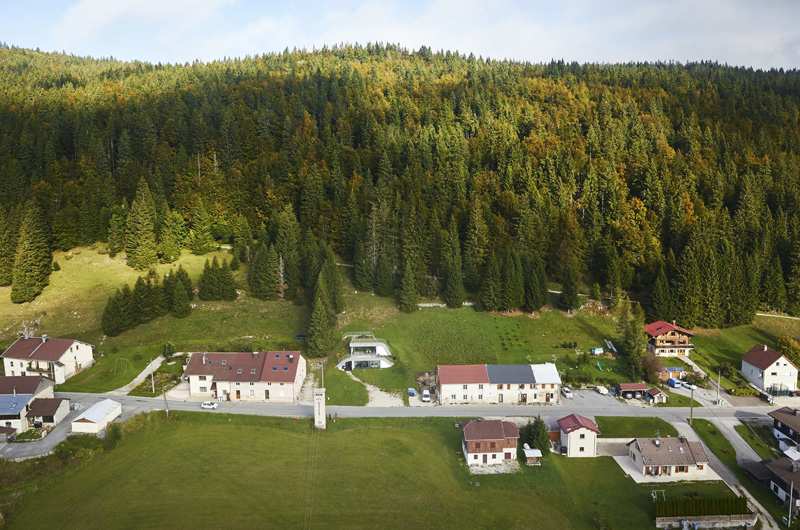 Now this is the village. As you can see, the homes around the Casa Jura are all ordinary and even classic. Most of them have old designs and because of the modern unique look of Casa Jura, it stands out in the village. 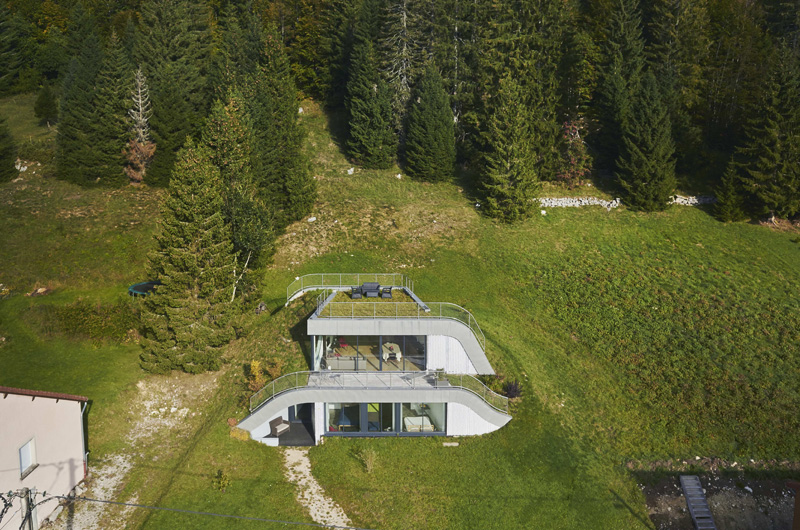 In this image, you can see the different levels of the house as well as the garden roof deck that is actually part of the hill too. 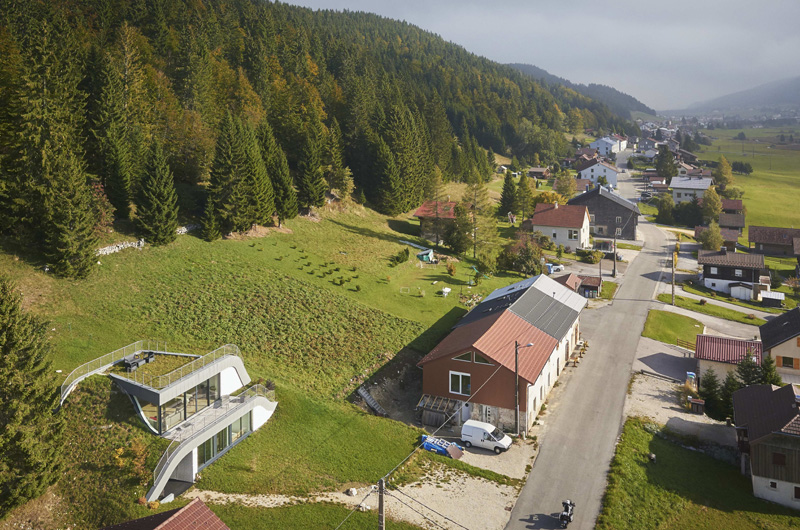 Another view of the village is seen here. Not a single residence is the same as Casa Jaura especially that its location is already unique. You see, there are other ways to build a house in a hill but the designers opted to do it in a unique manner. 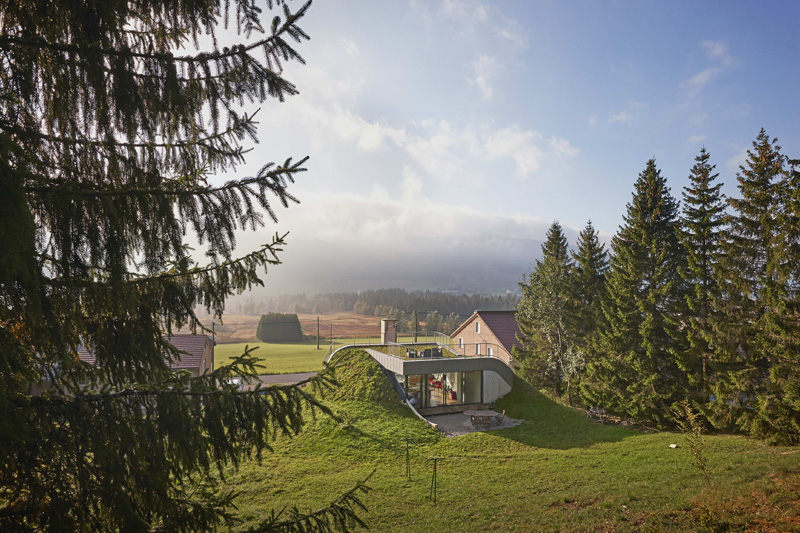 From the house, the owners can get a lovely glimpse of nature’s panorama with trees and a lot of greens. That would be very relaxing for sure! 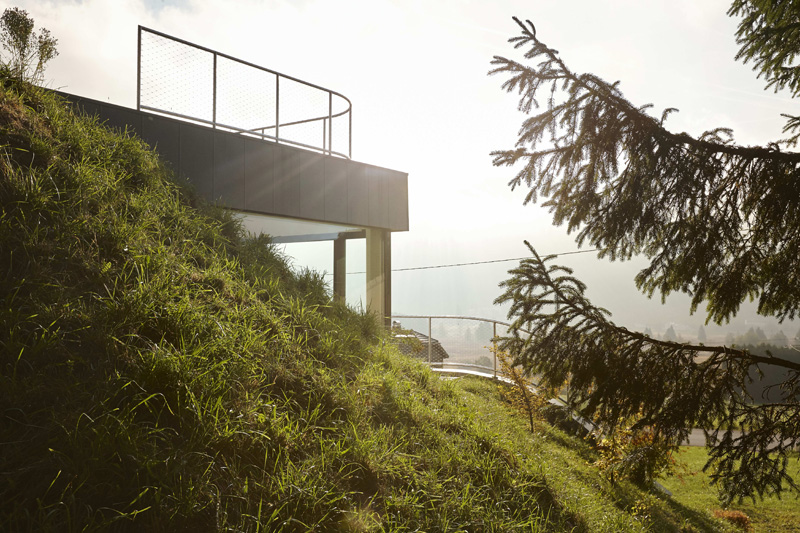 A closer look at the green grasses on the hill that became a part of Casa Jura. 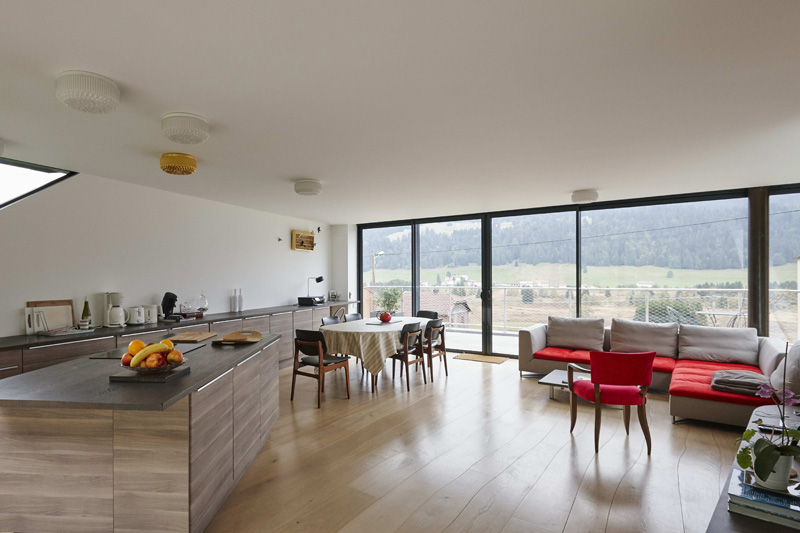 And now the interior. It used white for the walls and ceiling and wooden flooring to make it look very relaxing and cozy. It used an open floor plan wherein all the spaces are just in one area. 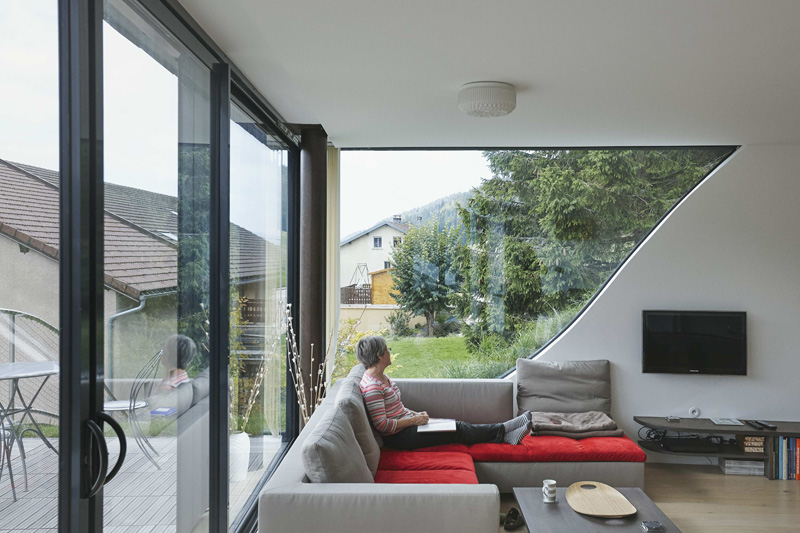 A color palette of gray and red can be seen in the living room which overlooks the garden. It also connects directly to a terrace. 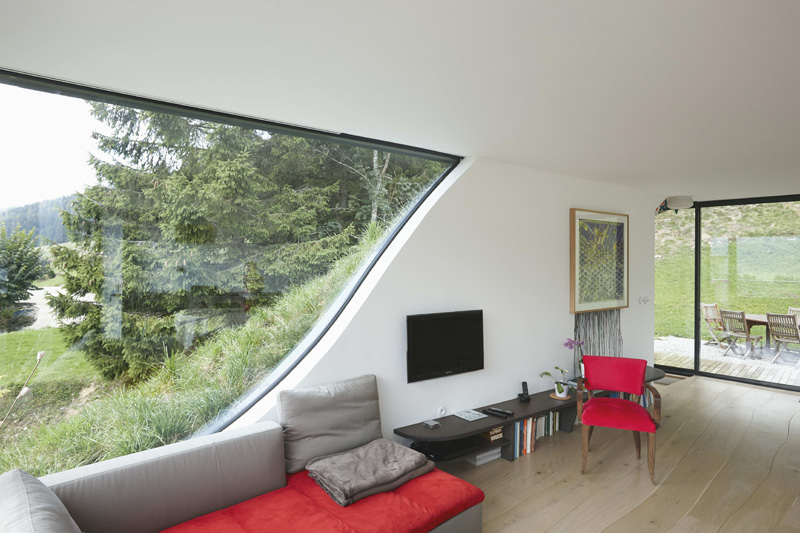 With the glass windows used in the house, one can get a lovely view of the trees and of nature around the home. It would be very nice to sit on this comfy sofa while watching the leaves of the trees outside. 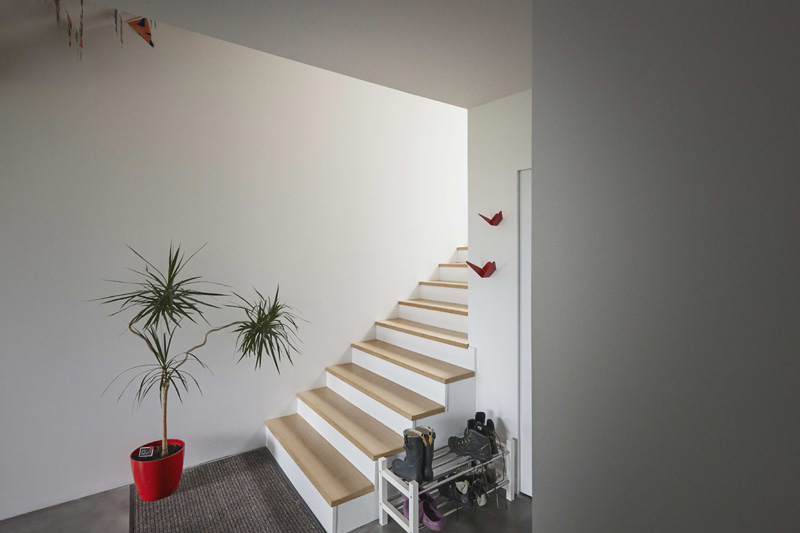 A wooden staircase leads to the upper level of the house. Notice that there is a red pot here to compliment with the color of the sofa and chairs in the living room. 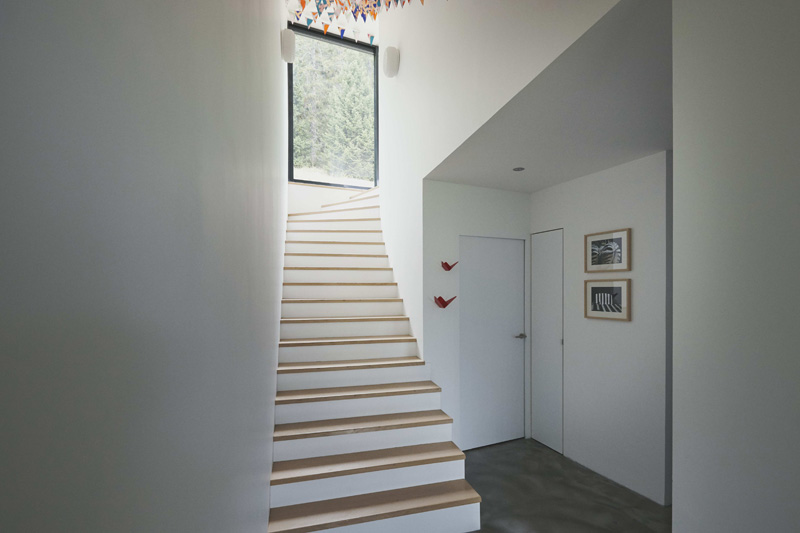 Another look at the staircase wherein a window meets you as you get to the top. Below the stairs is a small room which is a good way to maximize the space. 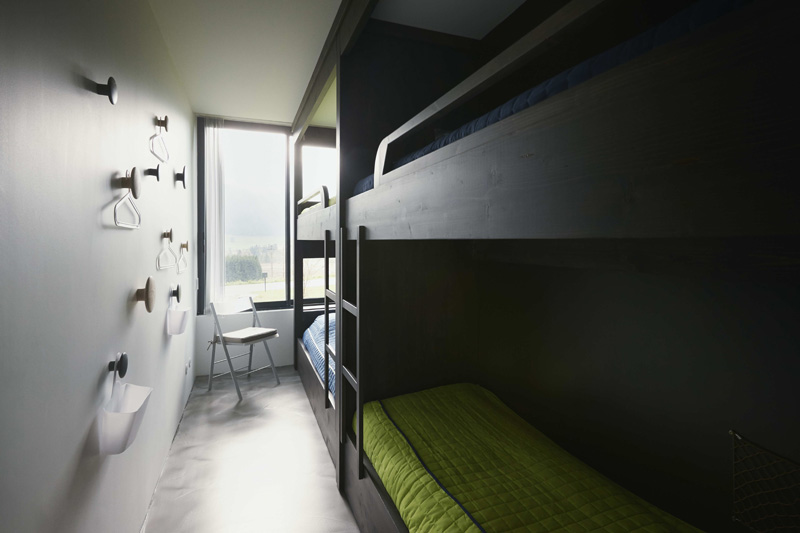 This could be the bedroom for the kids or for young people since it has double-decker beds good for four people. What I find interesting here are the knobs on the wall where hangers and containers are added.

What can you say? Such a lovely home indeed! And what I love most here is how the home was blended with the environment without destroying it. You can notice that because of the design that JDS Architects did, the house stood out and became a beautiful highlight in the village. The design is indeed different from other local homes because it applied a modern design and it considered its location. But of course, it isn’t merely about looks. It also takes into consideration the function of each part of the home to make living more comfortable. Lovely and unique no doubt!

Fashionable Design of the Anderson Pavilion in California

Beautiful Casa Jura Home in a Hillside in France