Here is a clever way to highlight your bedroom in a small apartment.

It would be challenging to work on a small space like an apartment but amazingly, designers always have a solution to do it. Many apartments may have limited floor area but we have seen many beautiful apartment design interiors that are very creative. Some would have storage systems that maximize the space while others would have other ways to solve the little available area. But whatever they do, it would always turn out really nice. Today, we are going to show you another creative apartment which features an elevated bedroom.

This apartment in Russia is designed by Igor Glushan. Since the apartment is just small, he needed to add some features that will maximize its floor area while adding some functions that the homeowners need. It has a bedroom that is elevated from the floor level. This way, the bedroom is being highlighted and privacy is also brought to the area. The interior of the apartment has a gray color scheme with a modern design. There are a few key features in this dwelling that you can draw inspiration from for your own home.

Unique feature: The owners wanted to have a bedroom in the apartment with a small space. With that, the designers added an elevated bedroom area in the gray interior.

Similar House: Main Stay: A Contemporary House Designed for Inside and Outside Living 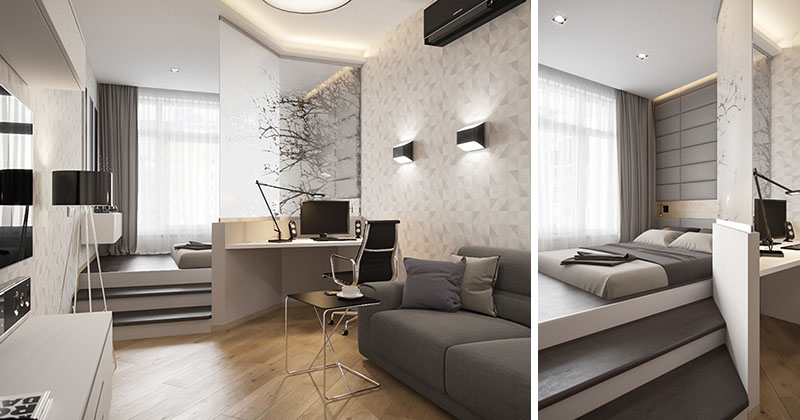 A frosted glass partial wall was added to the area to allow the light to come through from the bedroom window. At the same time, it provides privacy and appeal to the space. 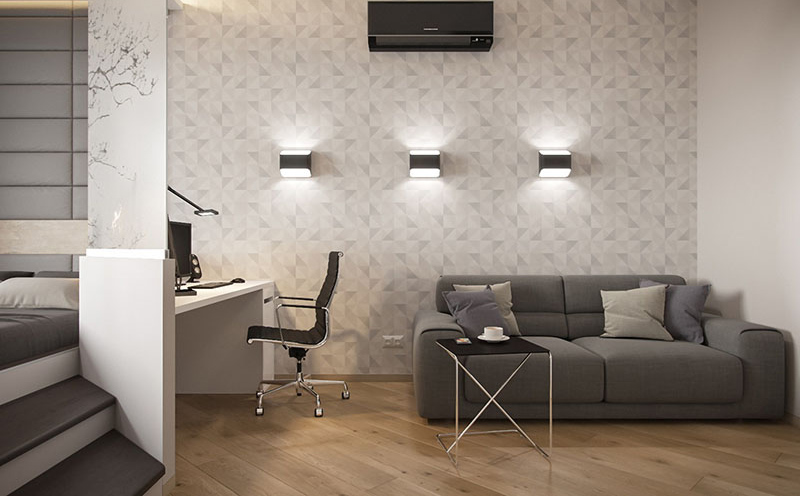 The bedroom shares the same space with the living area. But because it was elevated, it was given emphasis. You can also see here that aside from the bedroom and living space, it also has a small working area. This way, the space has many functions.

The interior of the apartment is apparently very nice and well-designed. It also has black accents in it which we can see through the floor lamp, wall sconces and other items. Aside from that, the lights that are emitted from these items add appeal to the interior. 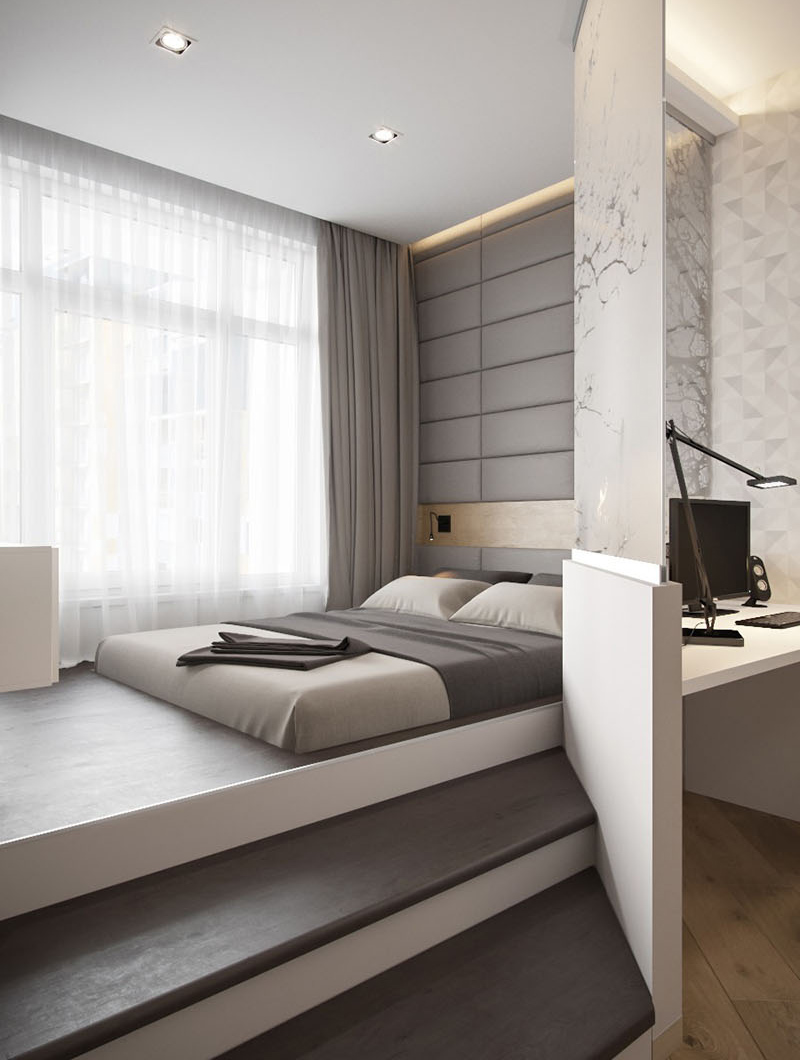 Since the bedroom has been raised up onto a platform, it separates the space and clearly defines the bedroom area from the living area. To control the amount of light into the area, white sheen curtains was used in it which brings a soft flowing feel to the bedroom. 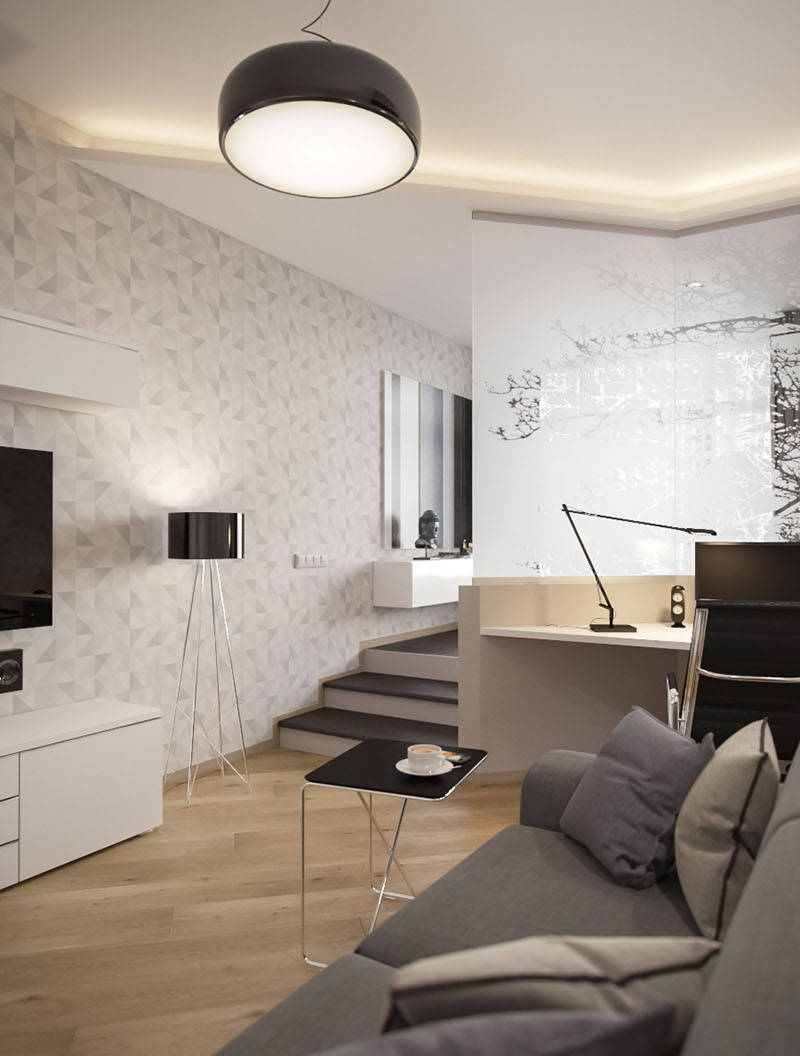 You will also notice that the steps to the bedroom line up with the partial wall and it create a small space. This small space allowed for a desk/office area to be built into the design. Now that sure is another smart way to use the area.

Read Also: Pleated House: A Contemporary House with a Green Roof in Wisconsin 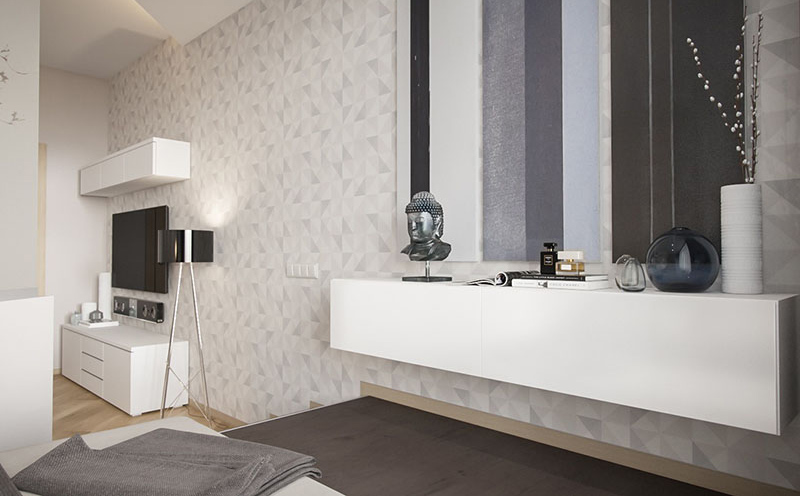 One side of the wall has geometric patterns on it but because of its muted colors, it doesn’t look busy and it doesn’t make the space appear crowded. Aside from the bed, the bedroom also has various interesting displays in it like that Buddha head. 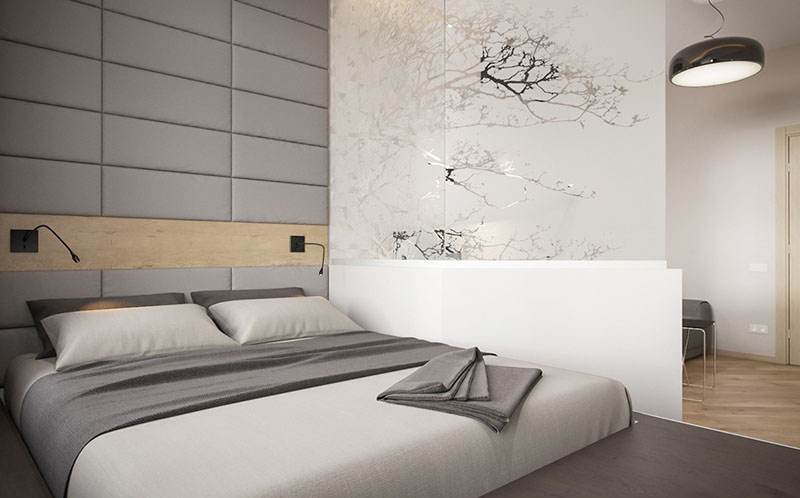 This is the bed of the elevated bedroom wherein overhead lights were added that would aid for reading and would just illuminate the bed area. The wall is padded in gray while the frosted glass has a lovely tree branch design on it..

Who would think that adding a bedroom to a small space in this manner can actually work well? For some, they would even make a mezzanine so that they can still use the lower portion for a kitchen, a study area and for other purposes. But that is of course applicable only if the apartment has a tall ceiling. But if not, then it is best to use the area wisely like what Igor Glushan did to this apartment. Aside from the elevated bedroom, the overall look of the interior is very nice and attractive. Even with a gray color palette, it turned out really nice. It is also a good idea that the apartment has lights everywhere which added drama to it and also made it look even more beautiful.