Tsai Residence: A House With Four Equal Boxes in USA

The Tsai Residence will surprise us with its modern look using four equally sized boxes. These boxes were built as simple timber constructions clad in corrugated galvanized iron. But the floor plan of the house “contradicts the austere outer form, dissolving the four volumes into living and exhibition spaces that exceed the individual boxes and whose structure serves only as a rhythm for the lighting design. The rooms of differing heights are arranged on a line that passes through the house via two small staircases in the form of a loop.” Amazing, right? What you can see in the exterior is not what you can actually find once you are inside it.

This house in Ancram, New York, USA is designed as a weekend house for two young art collectors. That is why, you can find some beautiful artworks that decorate the interior of the house. Its design is based on a simple abstract figure sitting almost incomparably on the highest elevation of the large block located two hours by car upstate from New York City. Let us take a look at the house below: 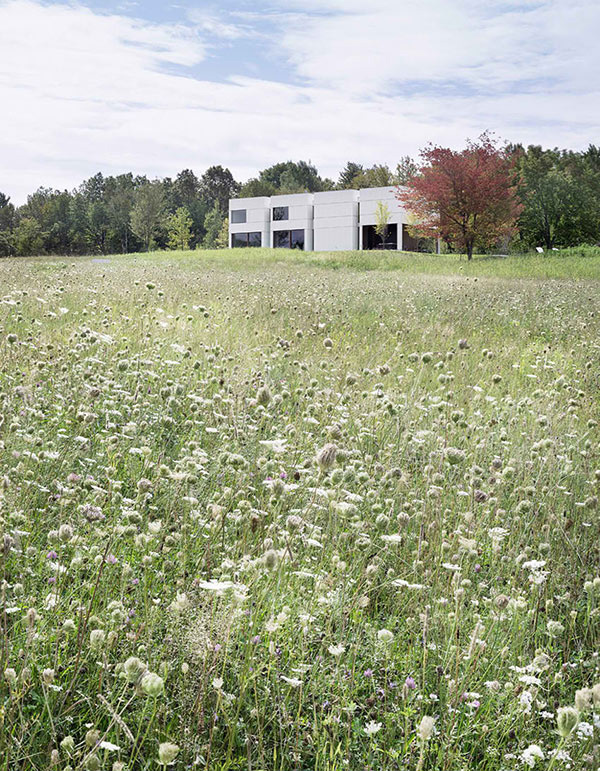 The location of the house is beautiful as it is surrounded by lovely trees and bushes. 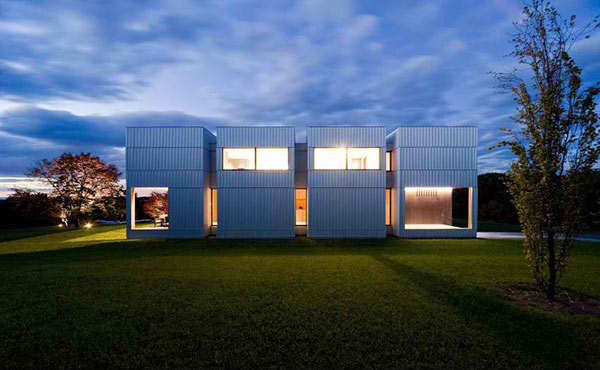 But the house itself is a beauty as it stands with its four boxes. When lighted during the night, it looks perfectly stunning! 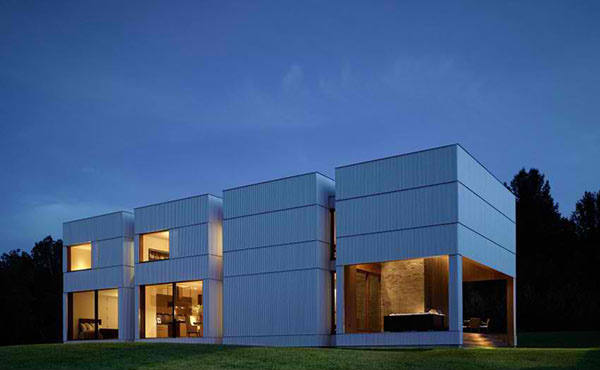 While you can see the blocks in the exterior, when you are inside, the boxy feel is dissolved. 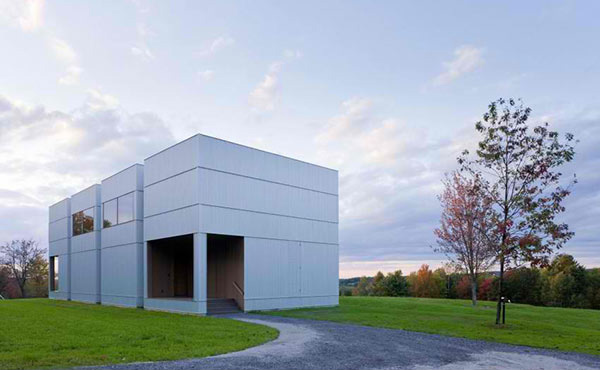 It is constructed as a typical American balloon frame construction divided into four boxes clad in corrugated galvanized iron and connected to each other via smaller passageways. 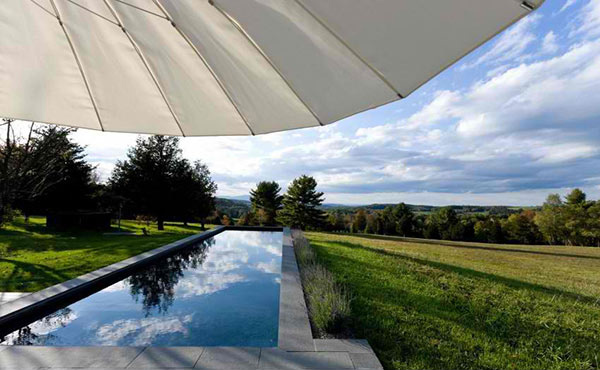 A lap pool is found outside the house which boasts its stateliness despite being simple. 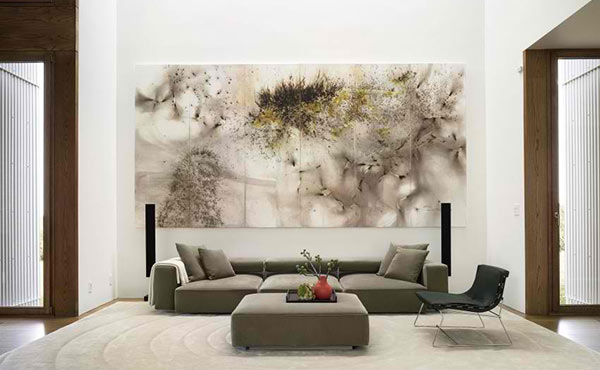 A modern minimalist living room which is merely decorated with small centerpiece on the coffee table and an art work that is certainly a head turner. 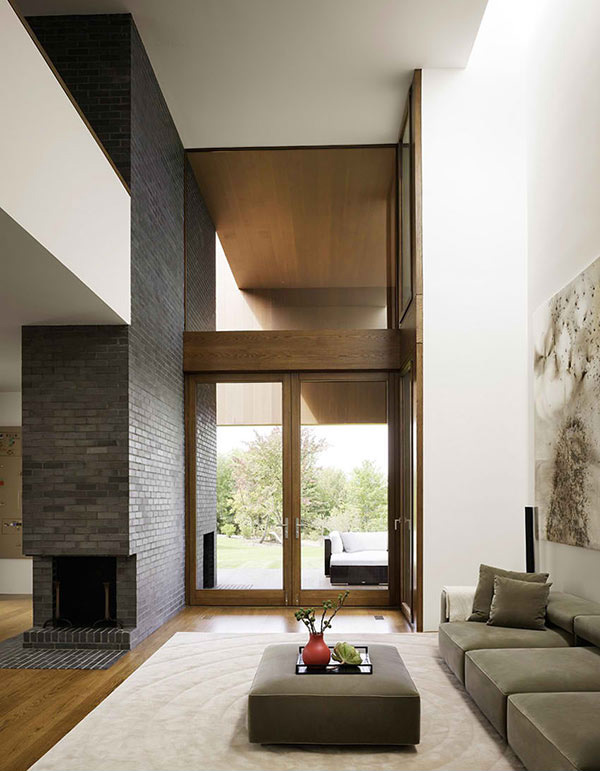 The double height living room also has a gorgeous fireplace that has an extended brick wall design towards the upper floor. 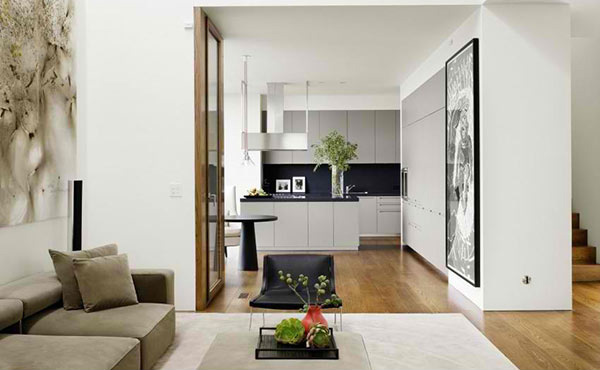 This living room directly leads to the eat-in kitchen which has tall art works on the sides. 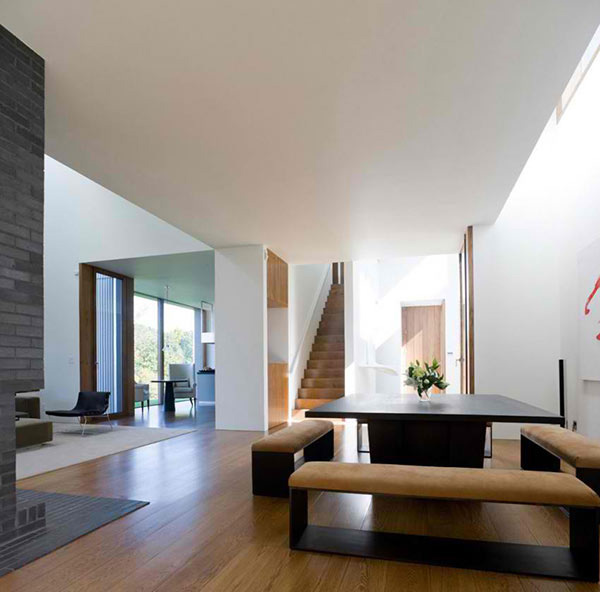 This is the dining area. In this shot, you can also see a stairs leading to the private sleeping areas of the house. We also notice the wooden flooring that adds more warmth to the interior. 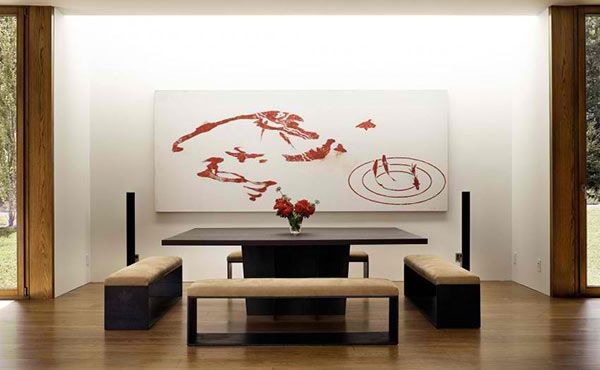 Another huge artwork is seen mounted on the wall in the dining area which is comprised of a black wooden dining table and four benches. 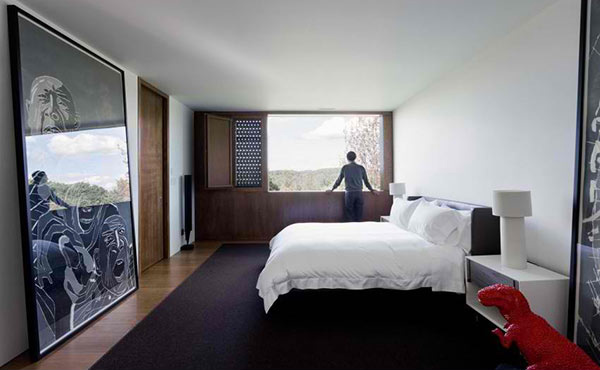 One of the bedrooms is decorated with a giant artwork that stands on the floor. We find that red dinosaur a bit queer! 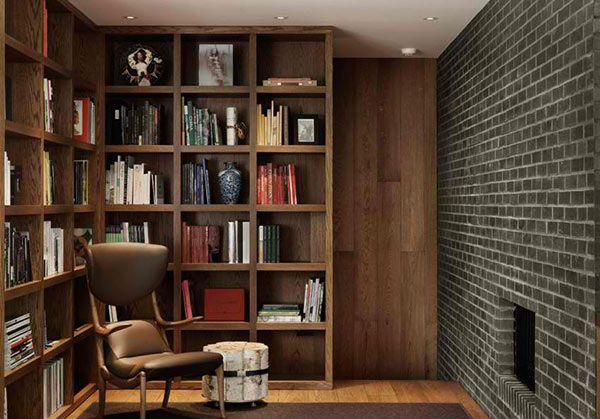 That chair looks like an artistic piece as well as the ottoman beside it that also acts as a side table. The home library sure is a perfect spot to spend time alone! 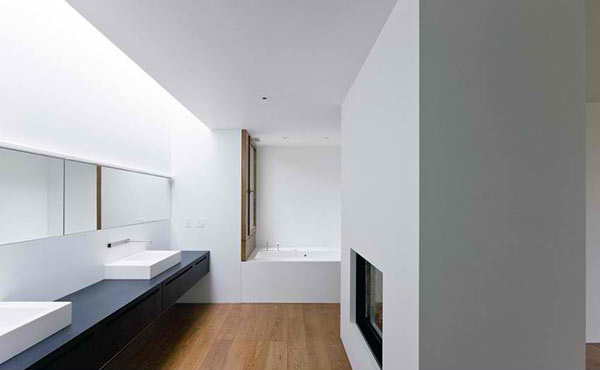 The bathroom is also simple in white with some black accents from the vanity. 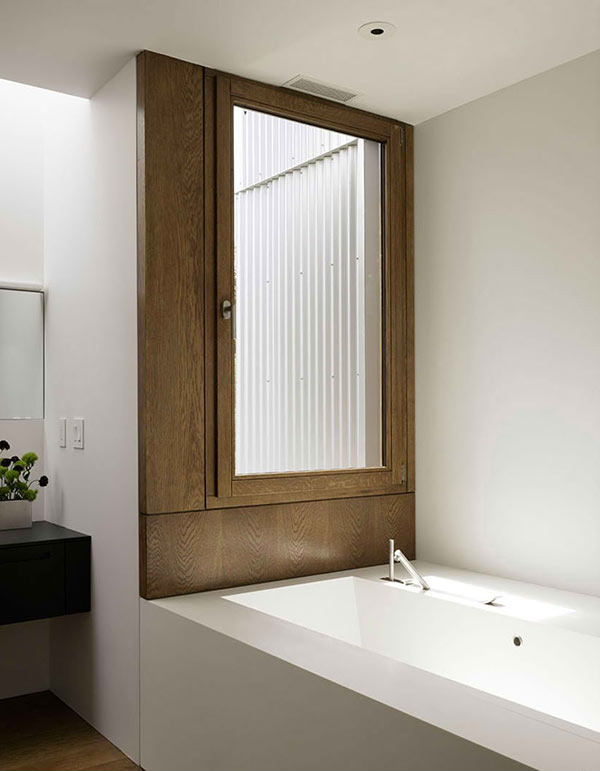 Shown here is the bathtub that has a cabinet above it for storage in the bathroom.

HHF Architects and Ai Weiwei further defines that “the facade’s material is reminiscent of agricultural utility buildings, but the vertical corrugations and glimmering shine lend it a thoroughly noble character. Moreover, the horizontal edges of the corrugated iron sheets overlap, in this way subtly articulating the building’s wall structure: foundation, breast and roof zones frame the room-high openings to the ground floor and the horizontally elongated windows of the upper storey. Much is the product of radical standardization, the corner construction of the facade as well as details in the interior. Otherwise, realization in the U.S. with a local building authority would not have been under control.” Well, if you have a weekend house as beautiful as this one, you might even decide to just live here!

Inclined to arts and design, he finished BS in Architecture and is recently fulfilling his dreams to be an Architect. He possesses excellent designing and drawing skills that have brought him to different confabs and competitions where he ended glorious. As his passion, he opted to be part of the Home Design Lover Team to share his love in the said field to other people.

Tremendous Makeover of a Shabby Cottage in Healdsburg

Unearth the Promising Views of the Belvedere Residence in San Francisco

Fabulous and Deluxe Design of the MZ House in São Paulo, Brazil

Tsai Residence: A House With Four Equal Boxes in USA