The Projector House: Magnificent House of an Architect

Being an architect is also not an easy task because professionally speaking they got a bigger obligation to deal with. They are commissioned that in every structure they build must always concern the safety of the public. But I often wonder and keep asking myself if architects would also plan to build beautiful structures as their own haven just like what they are creating for their clients? The fact that they are busy creating plans for others, would there be a chance for them to plan for their own? Well, I guess my questions will be answered today.

This house is built by a promising architect who tends also to be the owner. Yes. Kristen L’Esperance gets to construct a home of her preference. Long before this home serves to be the family’s vacation house, but it was destroyed by fire since the area is more susceptible with high wind that causes their chimney to tear down and resulted into breakage of some electrical wiring. After which her father was tempted to sell the area, but surprisingly they got money from the insurance, instead she was asked by her father to turn up a plan of the home. 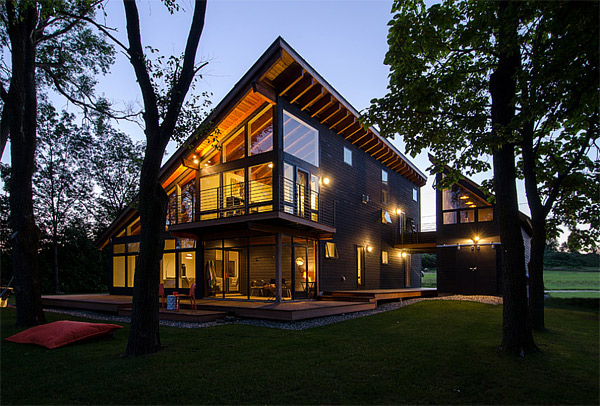 This project was named “The Projector House”. The concept “projector” means by expanding the views whilst concealing the outside edge, thus boosting the toughest positive feature of the location. 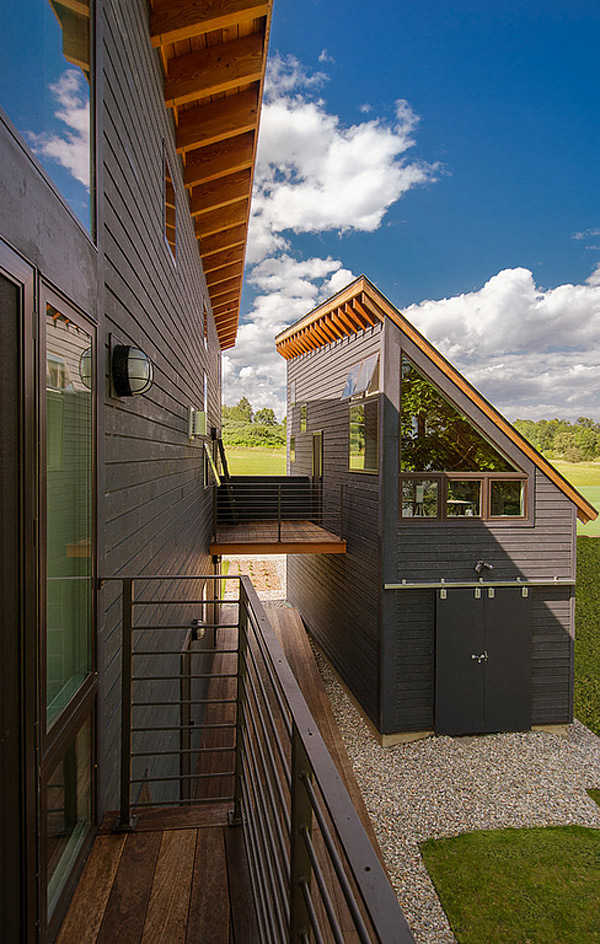 The owner wanted to amuse herself with dimensions and shapes of the site so she came up with an idea to create a house with two structures. The home is composed of: the main living spaces where the living room, kitchen and bedroom are located. And the other one is attached by suspended walkway that serves to be her private space. 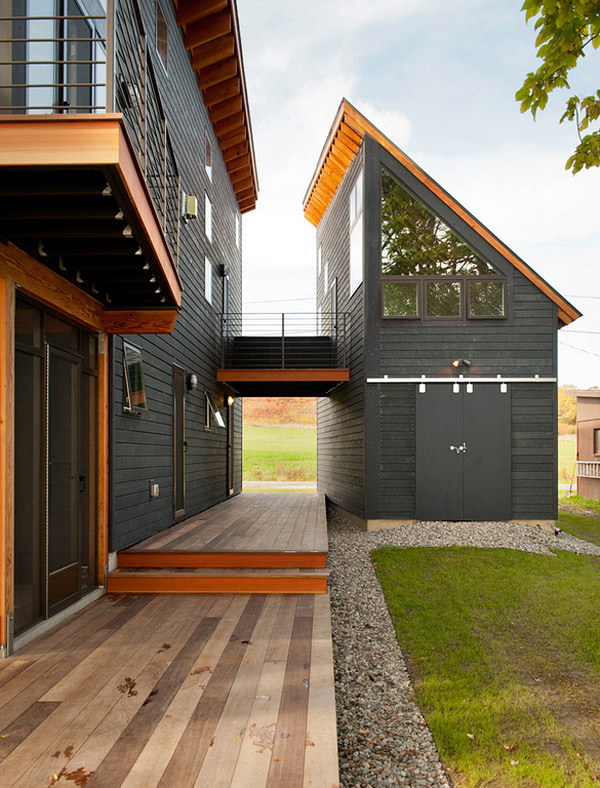 The house is made up of ipe timber materials which are visibly seen all around the house. Choosing the hard type of woods strongly offers a durable quality. 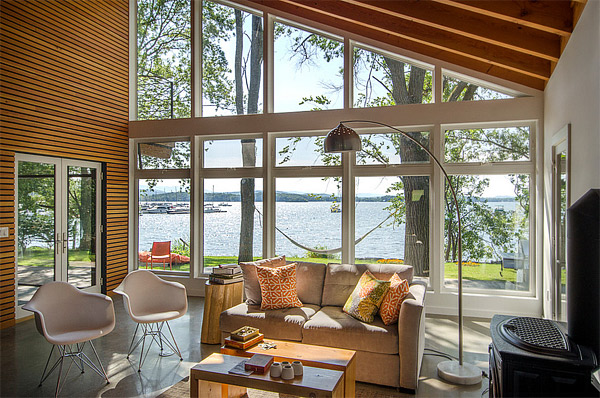 Before you could enter the living room you’ll get to pass by a mudroom which is designed with low-ceiling giving a grand effect to the main living space which has a high ceiling. Framed glass was utilized to keep the focus on the lake. 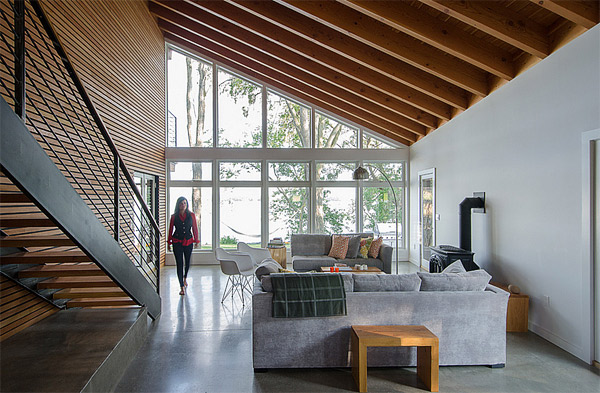 The owner wanted to have a home where she could contain a huge number of visitors and families. The living room serves as the receiving area for the guests, designed with a double-height ceiling that is slanted vertically. 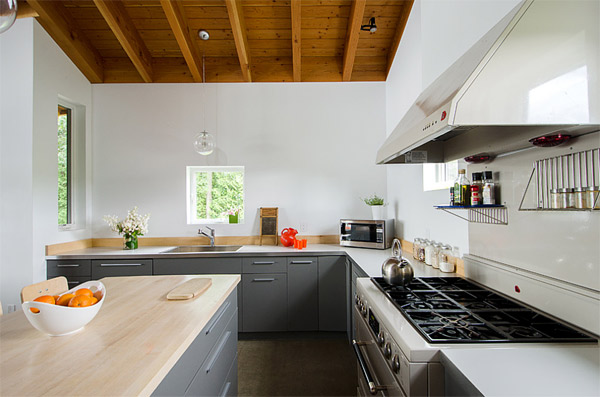 Everything she want for the kitchen is stainless steel matched with white paint. The kitchen island tops a Butcher bloc. 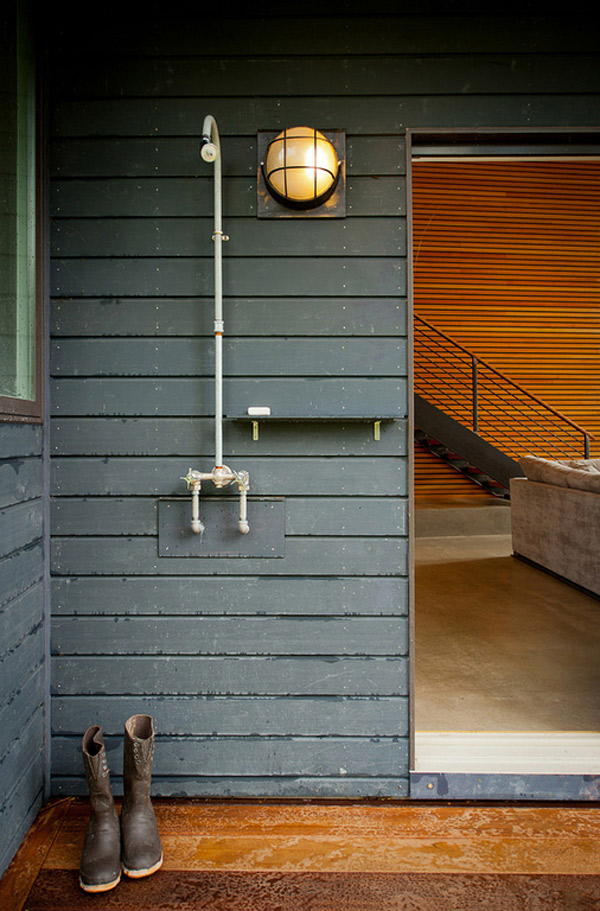 On the exterior part of the kitchen, you can find an outdoor shower area that gives a functional purpose for her guests that had a day running in the lake. 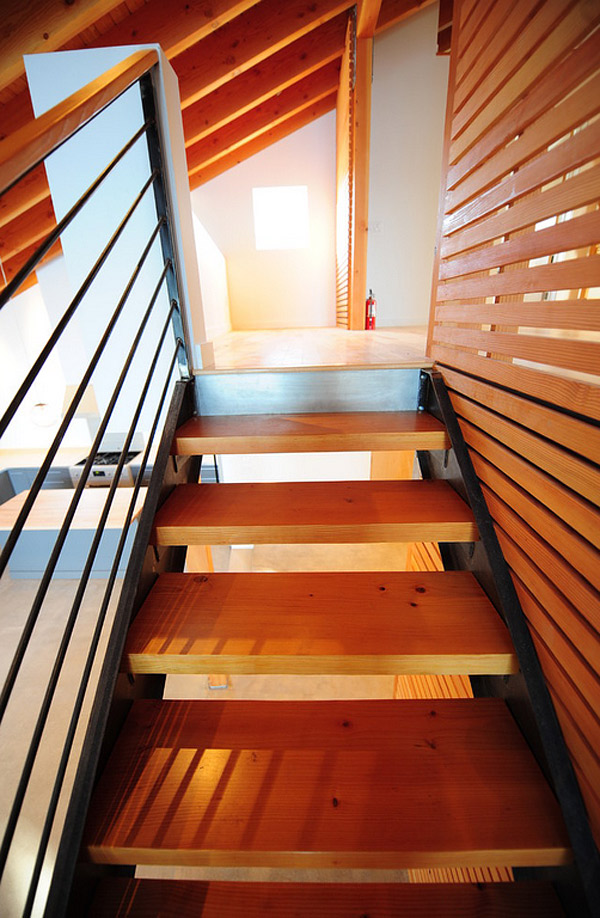 The staircase draws you to the second level of the house which is designed with woods and steel railings. At the end of the isle, situated at the corner is an office nook. 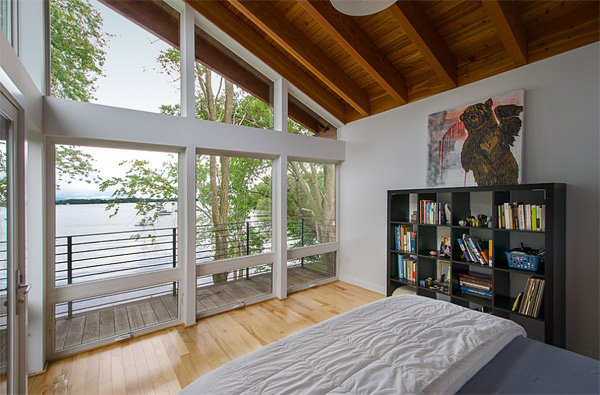 According to the owner, this spot got the best views in the house which happens to be the master bedroom. Would you believe that the beams were made from tree that was shipped out all the way from Portland? Instead of using bedside tables, she came up with an idea to install wall cubes. Behind this bed is an open space which serves to be the closet, where you can see from above are plants. 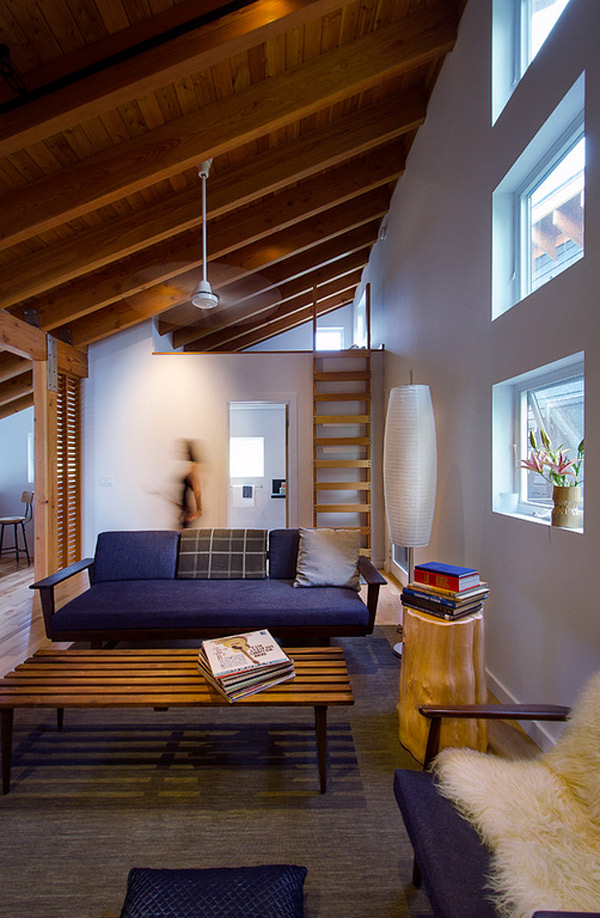 The bedroom has an own master-suite den that is furnished with a midcentury sofa, refurnished by the father of her good friend. 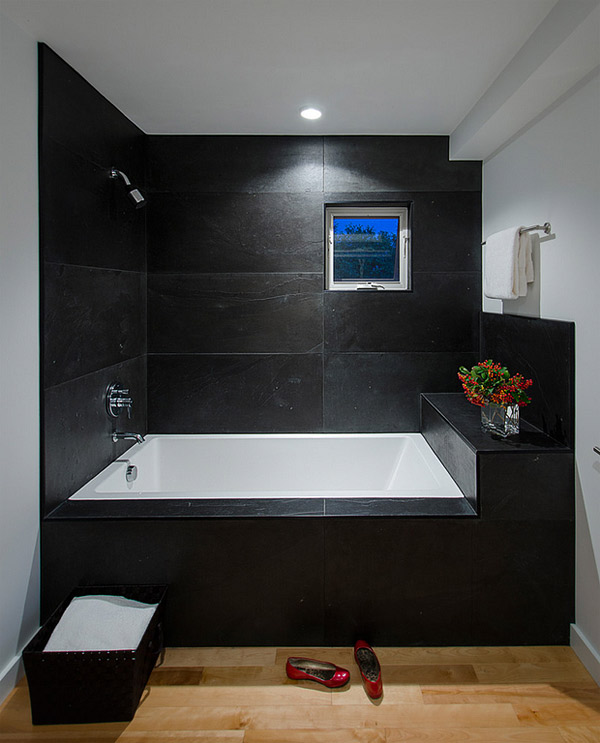 The owner used black slated tiles with wide dimensions for the bathtub because she thinks it would be much cheaper that small tiles. 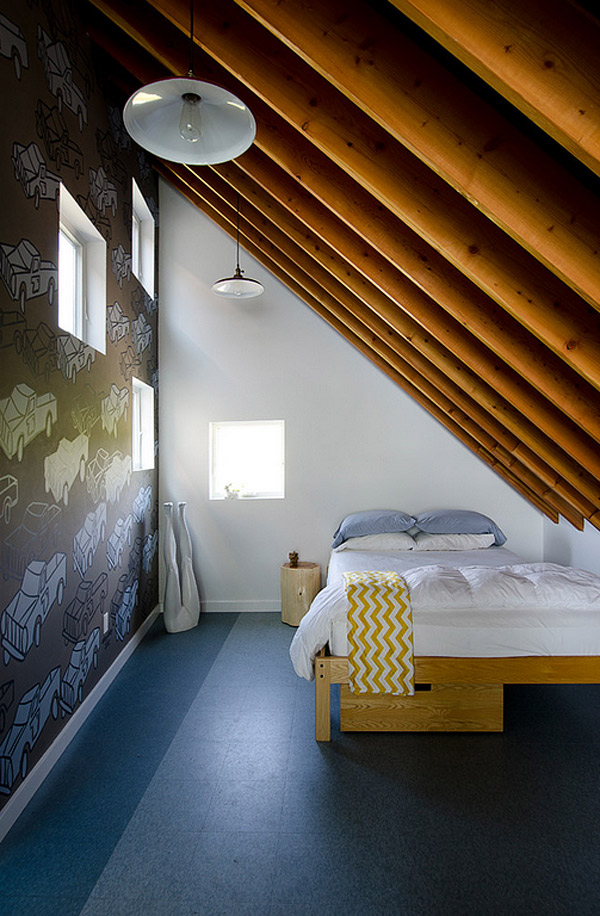 This space is what the separated structure contains, wherein the space below this bedroom is a garage and a wood shop. The bedroom is designed with a wall mural done by a friend of the owner. 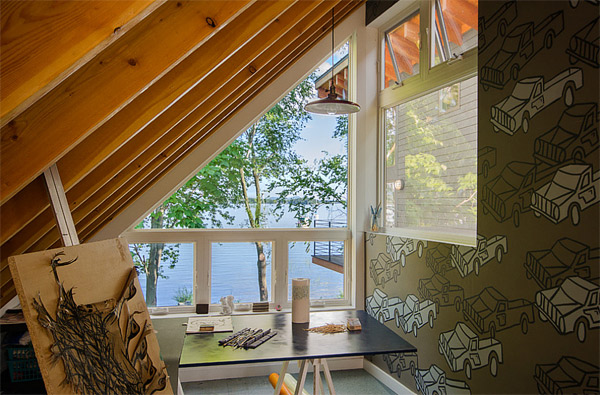 Of course, it would not be possible if the architect herself has no private space in this home. The bedroom also houses her artist’s studio. 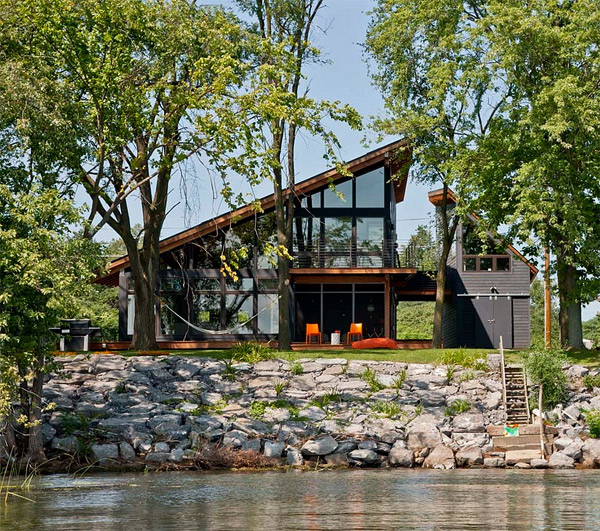 This house was envisioned in a small spot that is positioned 100 feet away from a lake, and takes advantage from the views of mountains and to other adjacent properties.

According to Kirsten L’Esperance, at first she was so hesitant to commend the request of her father thinking it would be an awkward feeling that her father would happen to be her first client. But after recommending some circumstances with her father and agreed mutually she then put this plan into action. And now, I’m pretty sure by then that her father is so proud of her creation.

She is a simple individual who is willing to contribute concepts about design and style. She is eager to further assess her capabilities and explore her limitations because she believes that life is a process. She let the creative side in her grow which is to write, be inspired and be an inspiration.

Geometric Architecture of the House in Ashdod

The Projector House: Magnificent House of an Architect