A Home with Glass Walls and a Central Courtyard in Brazil

Integrating a central courtyard to a home would make it look totally stunning!

Many homes these days are located in the city and struggle to add a garden in it to give it that natural feel or to bring nature into their homes. And yes, that is indeed very possible. Others would opt to add a roof garden if they don’t have enough space on the ground. Still others choose to add a central courtyard wherein the garden is at the middle of the house. Some has it at the backyard or at the front yard. Each one has their own way of adding privacy and beauty into the areas.

Today, we will feature a home which has a central courtyard that is inside it. The spaces around that courtyard are covered with glass walls that can be closed and opened when needed. This home is designed by Forte, Gimenes & Marcondes Ferraz Arquitectos located in Sao Paulo, Brazil. When one passes on the street where the house is located, it doesn’t look like much but hidden within it is a personal open-aired oasis. But the design of the house is very unique since it has a triangular feature on the roof and it also has glass walls. In the interior, it looks totally neat and it has beautiful furniture and decors. Come take a look at the house below.

Unique feature: This house is big and spacious, allocating a space in the central area for a garden. For sure, you will love the look of this house especially how it used different materials. At first glance, you would know that this is a stunning living area with a wooden cube which may contain the bathroom or a bedroom since these are private spaces. From the street, the house looks ordinary since it is sunken from ground level but when you move closer into the house, you will see that it is indeed something really stunning! 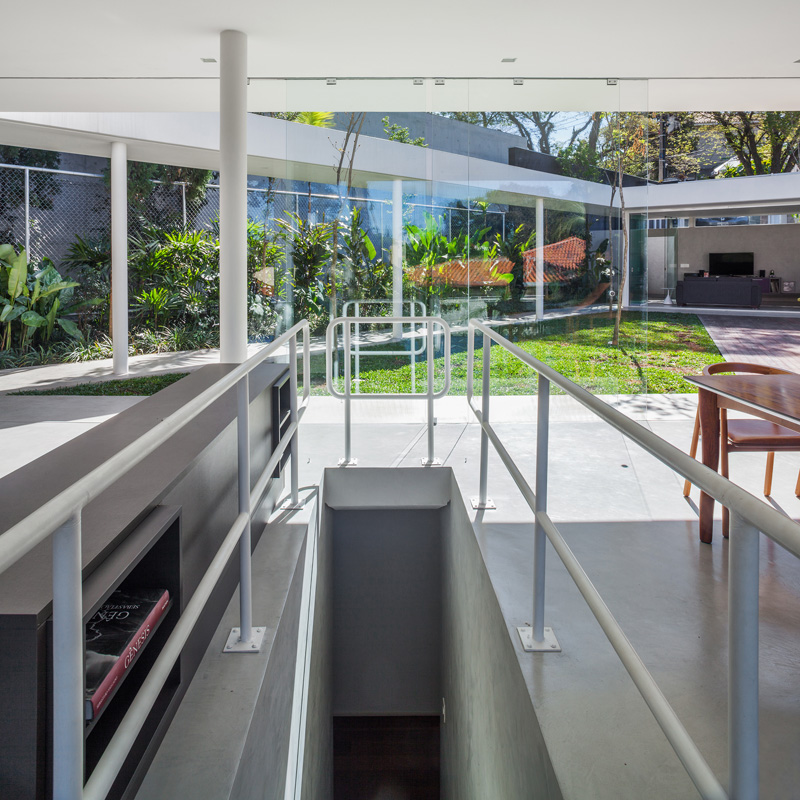 The majority of social areas in this house like the living room and kitchen, all open up directly to a central grassy area. 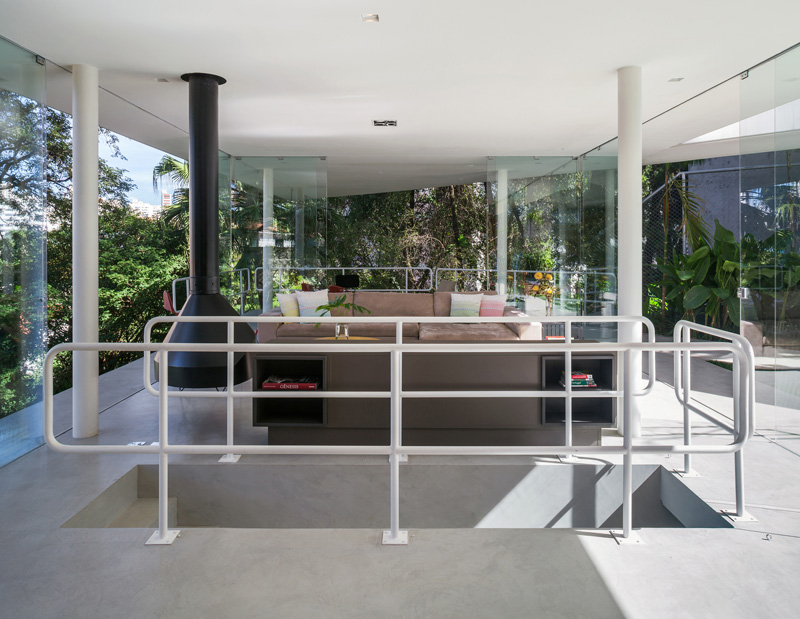 The house has a suspended fireplace in the living area and overlooks into a beautiful view of nature. 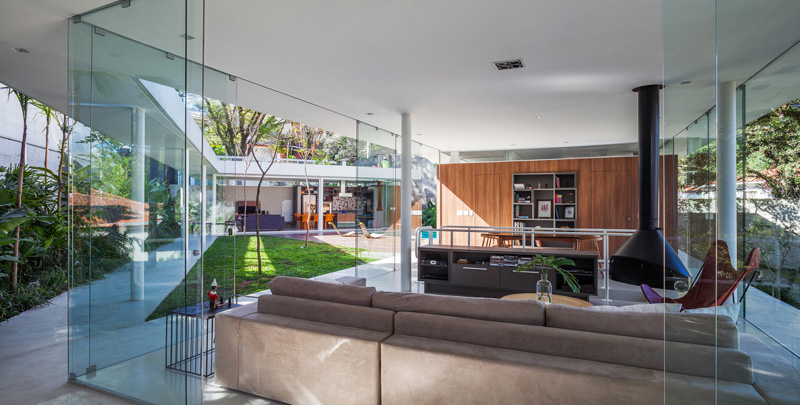 The house has two areas on the sides of the courtyard wherein both have sitting and living spaces. For sure, it would be nice to spend some time in here. 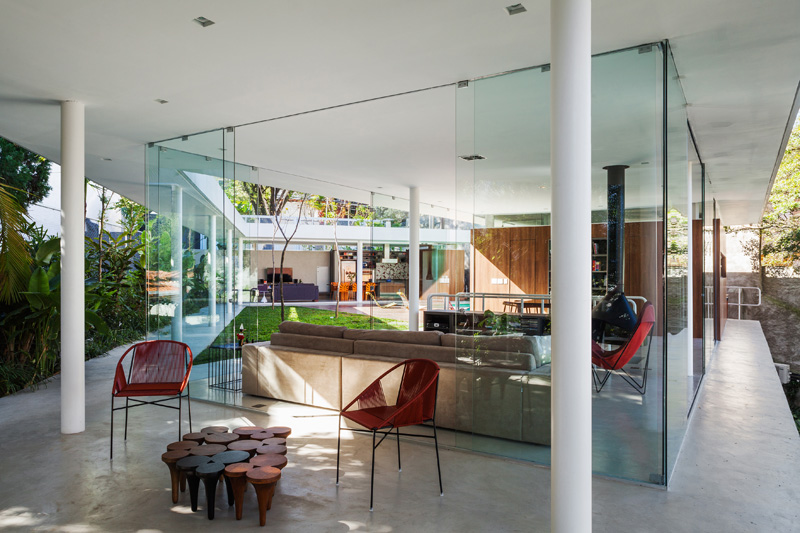 Since the house has different furniture in it, you will also be able to see some unique styles just like this coffee table and the red chairs just outside the living area. 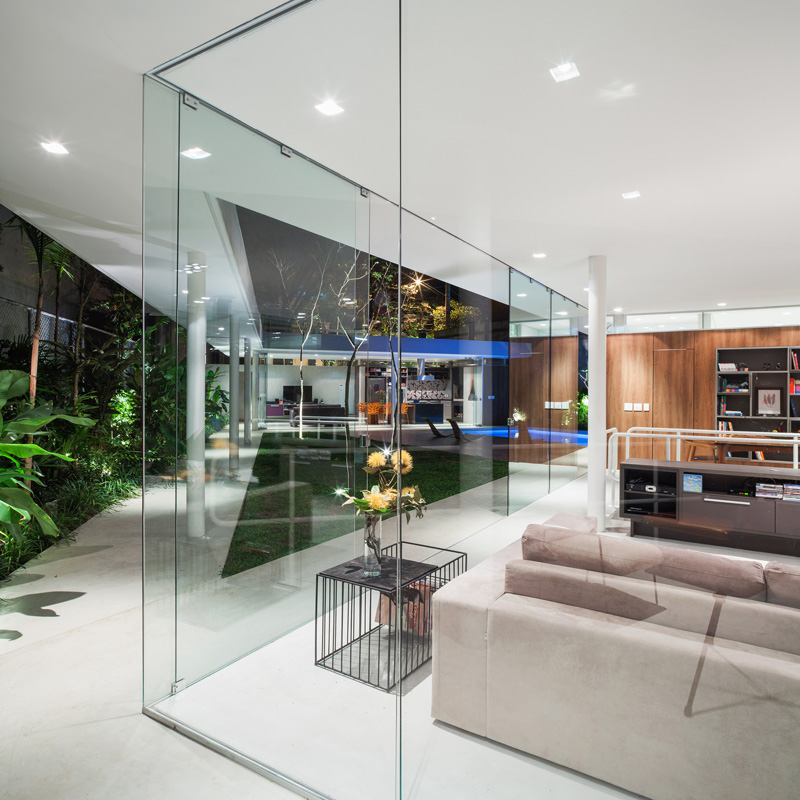 Glass surrounds the space which makes it transparent and allows one to see everything in both areas including that of the courtyard. During the night, it looks even more dramatic because of the lights.

Read Also: The Splendid Ambience in the Albatross Residence by BGD Architects Seen here is the courtyard with a pool. If you look at the neighbor’s you will realize that this home is indeed sunken from ground level, showing only the roof on the street. One one side of the courtyard is a kitchen that has a completely open view of the pool area. The kitchen has a dining table attached to its island and uses modern equipment for cooking and preparing food. Aside from the geometric pool area, you would be pleased to see that it has a wooden deck that adds to its being refreshing and relaxing. Seated on the deck are colorful lounge chairs. A closer look at the lounge chairs which appears to be made from organic material. It does look really nice on the wooden deck as well as the wooden wall backdrop. There’s a covered concrete path surrounding the grassy area of the courtyard which features a triangular opening in it. The exterior of the home is seen here which shows the different levels of living. As a matter of fact, it has many living areas as well as a garden with many lights. 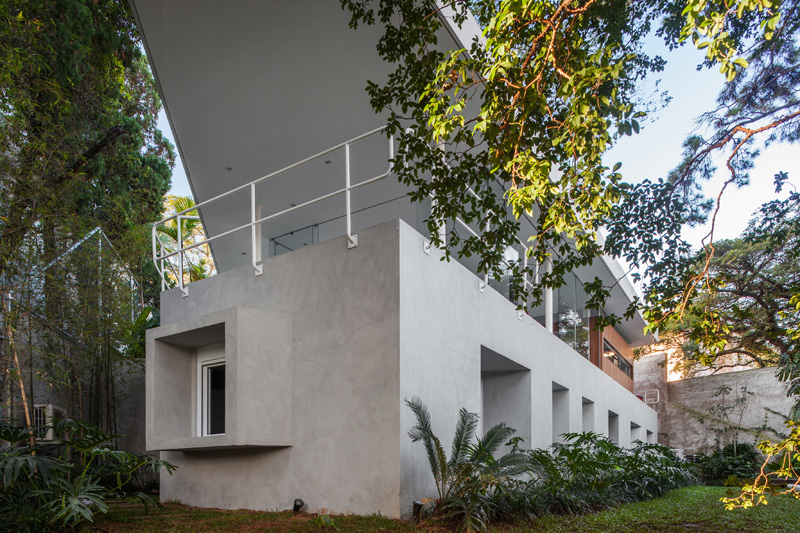 The architecture of the house is just simple and it has a triangular roof which adds to its uniqueness. Notice also how it is surrounded with various bushes and trees. The house has windows on it which are large enough to sit as you can see in the photo wherein a man sits on a chair inside one of the windows. On the upper level, you can see the glass covered area. 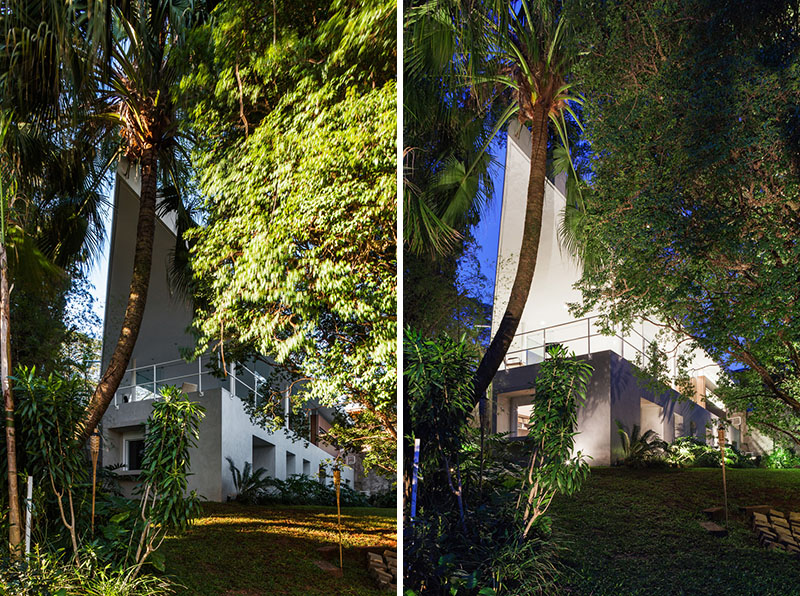 Seen above is how the house looks like during the day and during the night. When it is daytime, the area is filled with sunlight and when it is night time, it is filled with lovely lightings that bring a lot of drama into the home,

I know you would admire the work of Forte, Gimenes & Marcondes Ferraz Arquitectos because of what you can see from the images above. I like how the garden was integrated as well as the small path with plants around it giving you that refreshing feel. The house also has a pool area and some lounge chairs around it. If you look into it, the entire house is very beautiful and unique. The triangular opening to the courtyard is very nice as well. How about you, what are the features in this house that you like the most?

House 334: A Wood and Concrete Home for a Family of Three

A Home with Glass Walls and a Central Courtyard in Brazil