Before and After Photos of a Renovated Historic Garage in Idaho

An old garage gets an update transforming it into a very functional space oozing with appeal.

Aside from the interior areas that are necessary for a house like the dining room, living room, kitchen, bathroom and bedroom, there are also some areas that are actually needed for every home just like a garage. Most families would own a car especially if the location of the house is far from the city. That is why a garage is necessary to make sure that a car is safe and secure. Some garage are just part of the house while others are separated. If you have a spacious area, you can actually add a separated garage especially if a family member is a car enthusiast. Today, we are going to show you a garage remodel with before and after photos.

Mark and Becky Uranga merely wanted to install electric garage doors to their historic Boise, Idaho, garage. It had carriage-style doors which they had to open by hand. But then, installing the new doors also mean that they need to raise the roof a bit. That change actually led to a total garage makeover. The 1908 structure could actually be transformed into something really special. Without expecting a major garage remodel, their small project became a significant update. The even extended the garage for better storage and the occasional square-dancing keg party. You will surely be amazed of how the new garage looks like now! 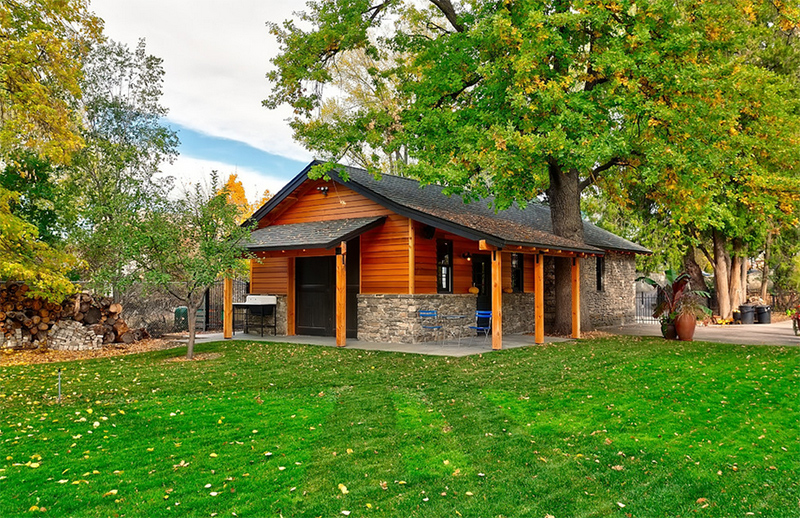 The result of the remodel is a beautiful spacious craftsman garage with wood and stone exteriors. Aside from being a garage, it is also used to store some items and supplies and even their bikes too. It also turned into a space for gatherings and entertainment. 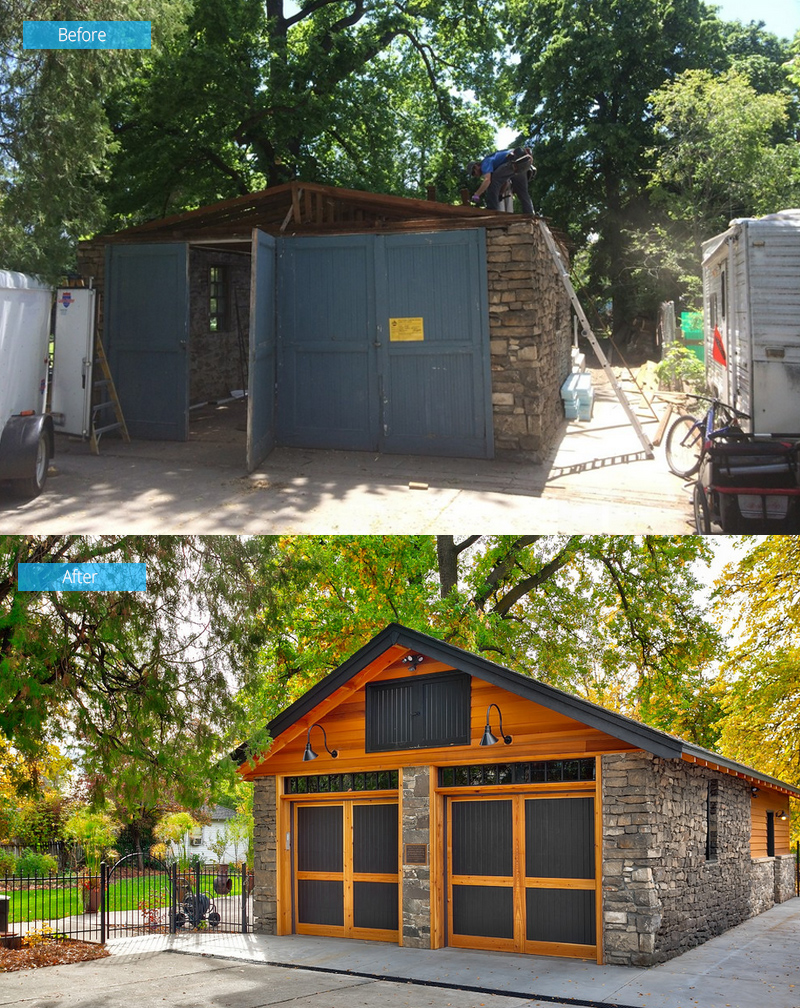 The owners thought that the garage was once a caretaker’s house, because they of a chimney flue inside. But according to rumors, the structure as well as the surrounding houses were once used to run a moonshine processing and distribution ring during Prohibition. It is also said that they were connected by secret underground tunnels. But there were no hidden pathways that the couple have found. The original garage has doors that were about to hang off and it looked very far from weather tight. “Any cat in the neighborhood could hole up in that garage if they needed to,” says architect Amy Cook, who is one of the architects who helped the Urangas design the new garage.

The roof was raised and extended to the back to double its size. The extra space is used to store lawnmowers, bikes, skis, strollers and gardening supplies, and also for entertaining. Since the electric doors that the couple got weren’t the right size, transom windows were added to make it fit. The windows add a contemporary feel to the garage. 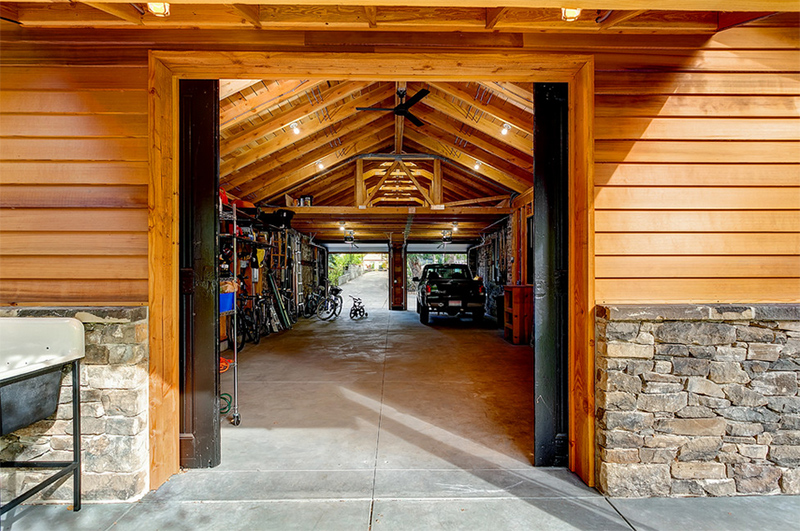 The original garage door was recycled and hung the barn-door-style at the rear. New doors and windows were added to the garage while the walls are exactly the same as the day they were put up. The roof was also changed. Because of its “historic designation”, high-quality materials were used to make it look more appealing. But that also meant more cost for the project. All windows are wood framed since vinyl siding wasn’t allowed. According to the designer, the windows should look like they had always been there for a long time. 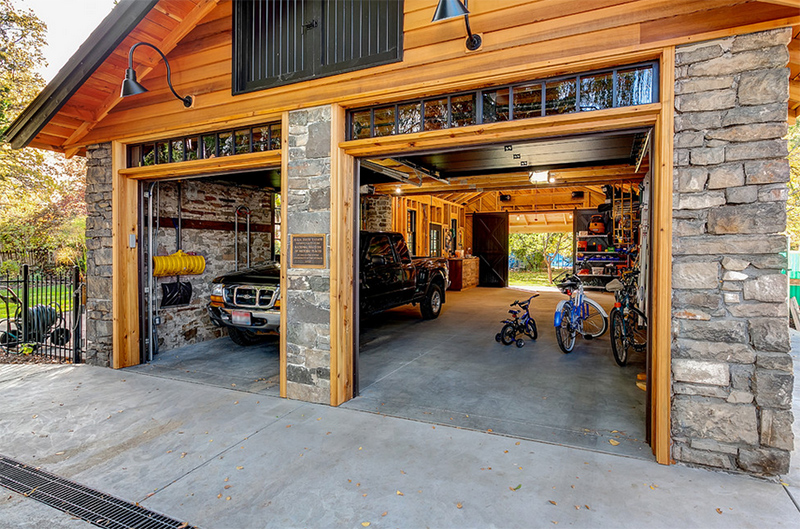 A hayloft was added on the garage which acts as storage for boats and rafts. To get things up and down from the crawl space, a pulley swings out from it. You can also see that there are windows above the doors which is a good thing in order to bring more light to the garage. This is indeed one spacious garage that could be perfect for a family who wants a separate space for their cars, stuff and for some activities.

Read Also: Before and After Photos of the Somerset Renovation 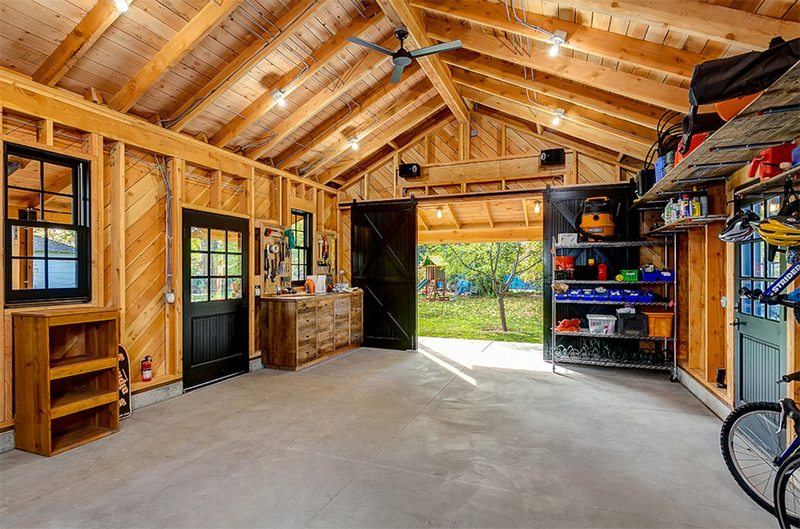 The interior of the garage also made use of wood as what we saw on the exterior. It has exposed trusses too that made it appear even more spacious. I like t that there are black wooden accents to the space. Even the cabinets and storage furniture are also made from wood too. Notice sliding doors, these were the old doors of the original barn, isn’t it a good way to reuse an item? 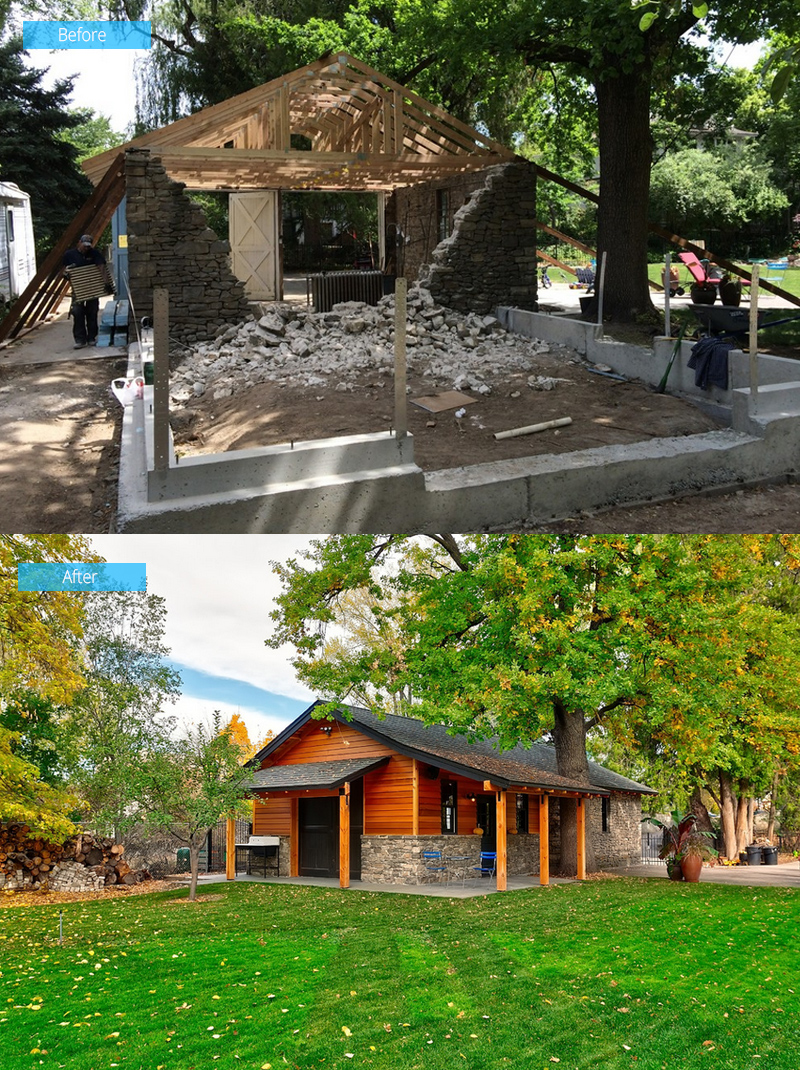 Since the garage is pretty old, the couple needed to completely upgrade the utilities of the structure. This once again added to the cost of the project. All the electrical and drainage was replaced, as well. The foundation had to be hand dug and put onto piers to salvage the roots of the large white oak tree. According to the couple, they have estimated the cost of the project to be about $120,000. On the photo above, the back stone wall was removed done by a skilled masonry expert. These were preserved since it could still be used for something else. The rocks were used for the back of the garage. It was utilized as as exterior wainscoting.

This beautiful garage was built by King Building & Remodeling LLC. Jon King of said firm and Amy Cook worked hand-in-hand for the project which turned out pretty stunning. Aside from its aesthetics, the garage became a very useful place for the family. With the looks of it, I can say that what the money they spent for the remodel was totally worth it because this is really something they can use for years and it sure is something they can totally be proud of! I also love the design in the exterior as it combined wood and stone.  First glance at it will make you think that it is actually a home and not just a garage. In truth, this garage made me wonder of how the couple’s home looks like because if this is their garage, then their home will surely look even more amazing! I would also give credits to the designer and builder who did an awesome job for this project since they didn’t just met the needs of their client but even went overboard in adding some features that would be helpful for them. So, do you want a garage similar to this one?

Before and After Photos of a Renovated Historic Garage in Idaho