Medlin Residence: A Contemporary Home on a Hill

Another modern home to add to your list of design inspirations.

It is challenging for designers and builders to build homes that are on top of a hill or in a steep topography but because of their initiative, this is made possible. Homes on a hill would also vary in design since it depends on what the homeowners want and what kind of lifestyle they have. Aside from that, the materials used for the exterior also vary and of course, the shape of the house depends on the land that it sits on. Today, we are going to show you another home that is located on a hill.

This contemporary home is called Medlin Residence which is an answer to the needs of the owners. The brief says that the owners wanted a four bedroom house with generous public spaces connected to the outdoors on a very constrained site in the first-ring suburbs of Raleigh. The location is in a long site in the north-south direction and it slopes down to the street towards the north. Across the northern portion of the site is a stream. Because of the associated buffer, the builders are prevented to construct on the front half of the property. The extreme topography of the south end of the site prevents the house from being too far back on the property. The design resulted into an L-shaped scheme that creates a courtyard between the house and hillside. Since the floor area is small, an informal den space was added on the upper level that can be reached through a staircase. Said stairs dominate the expression of the front elevation. Although there are large openings to the exterior of the house throughout the public spaces, the design affords privacy within it.

Unique feature: A modern home that sits on a hill. In its exterior, the staircase is being highlighted.

Similar House: Before and After: A Loft Apartment Transformation in San Francisco 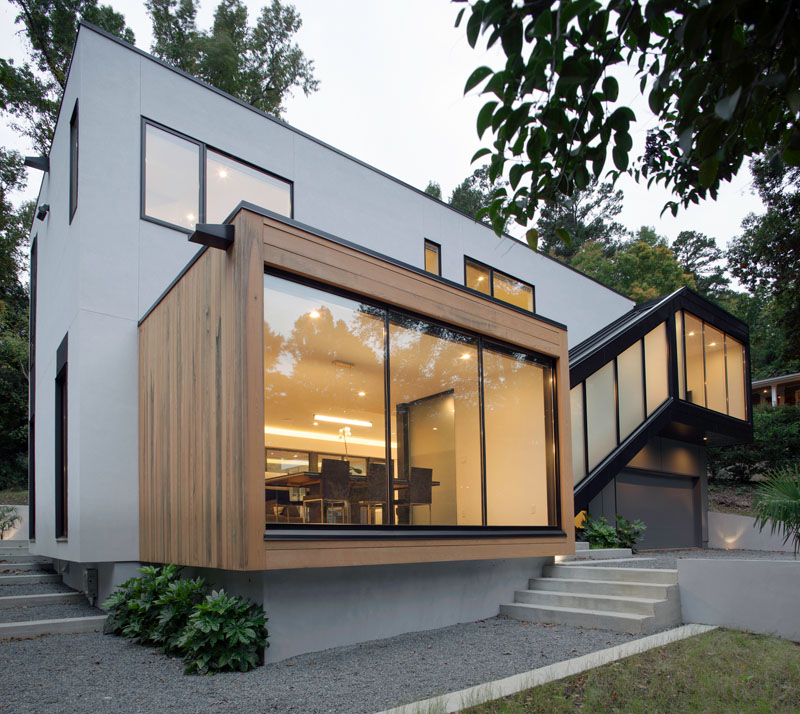 You might have seen other homes with a similar exterior as this one but of course this is a unique house and everything is placed differently. Its facade features 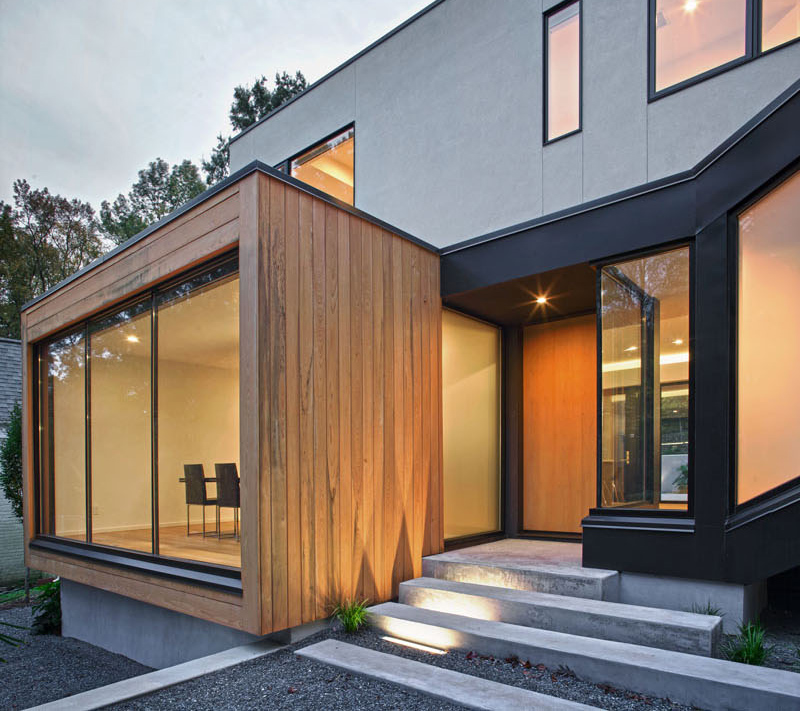 What made the facade more beautiful are the lights added on it like the ones you can see on the steps of this house. You can also see the entrance of the house with a wooden door. 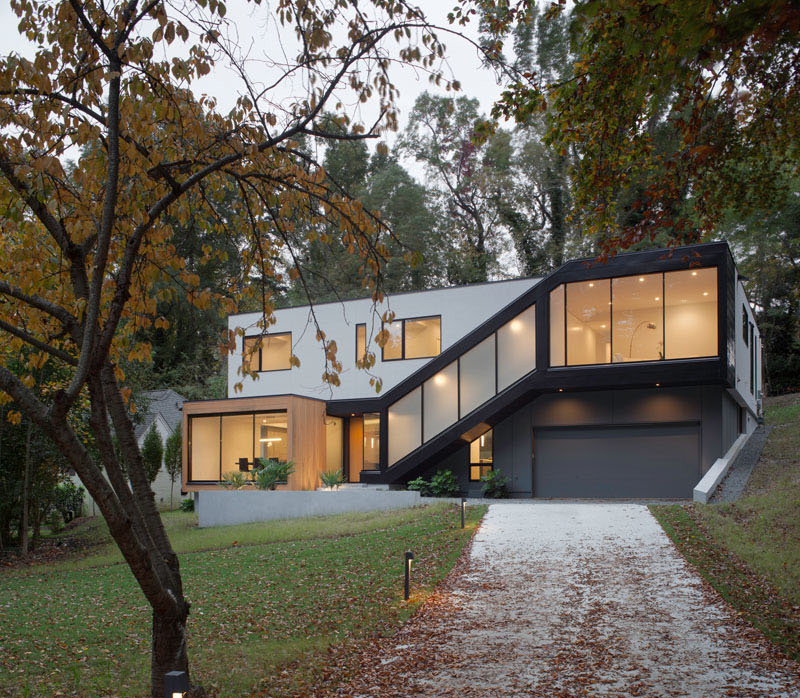 Aside from the beauty of the house, the surroundings also look very nice. It is very relaxing and it will make you feel comfortable while inside as you stare outside to this stunning view.

Read Also: Before and After Transformation of a 1968 Bland Looking House in Connecticut 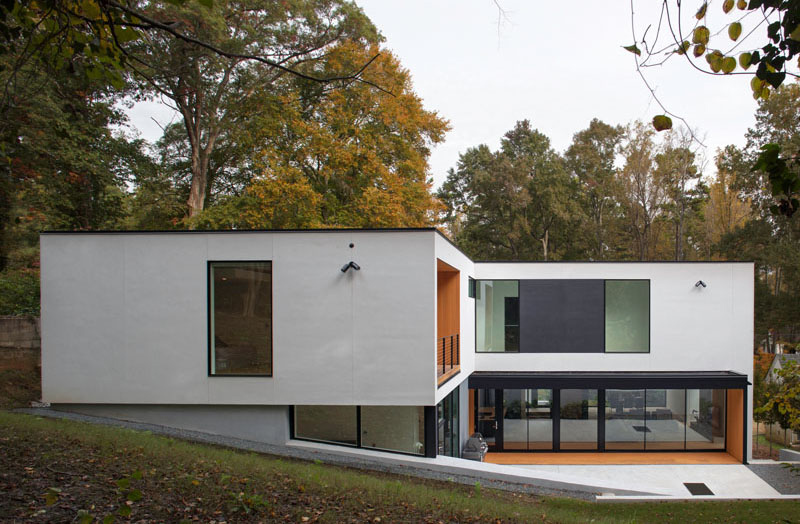 You can clearly see here the sloping topography of the house. Obviously, instead of looking at it as a limitation to the design, the designers were able to take advantage of it and use it as a positive addition to the architecture of the house. 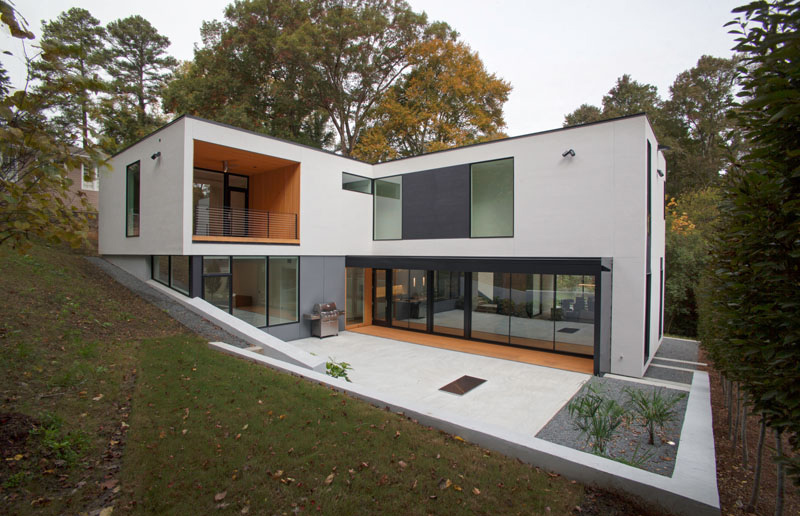 The L-shaped home has been designed to connect the living areas of the home with the outdoor areas, essentially increasing the living space. 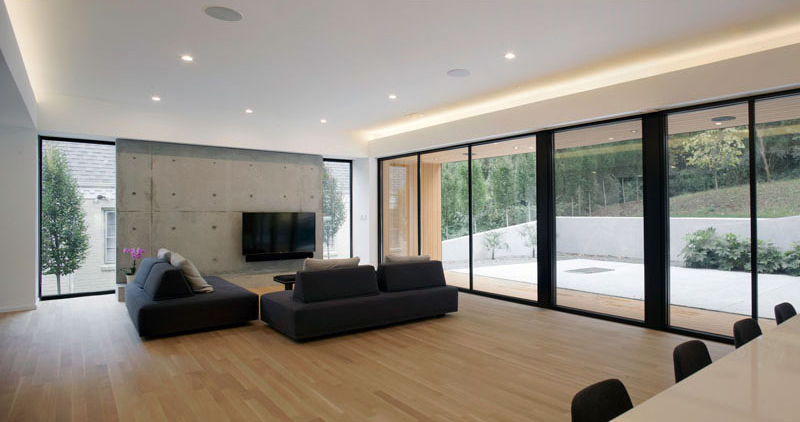 This is the interior of the house. It is neat and minimalist in approach. There are only a few items in this part but it does look nice. Since it is surrounded with glass windows, one can take a look at the lovely view outdoors. Notice also the concrete finish for the wall which holds the television.

With the open layout of the house, the living area, dining area and the kitchen are sharing the same space but are well arranged. 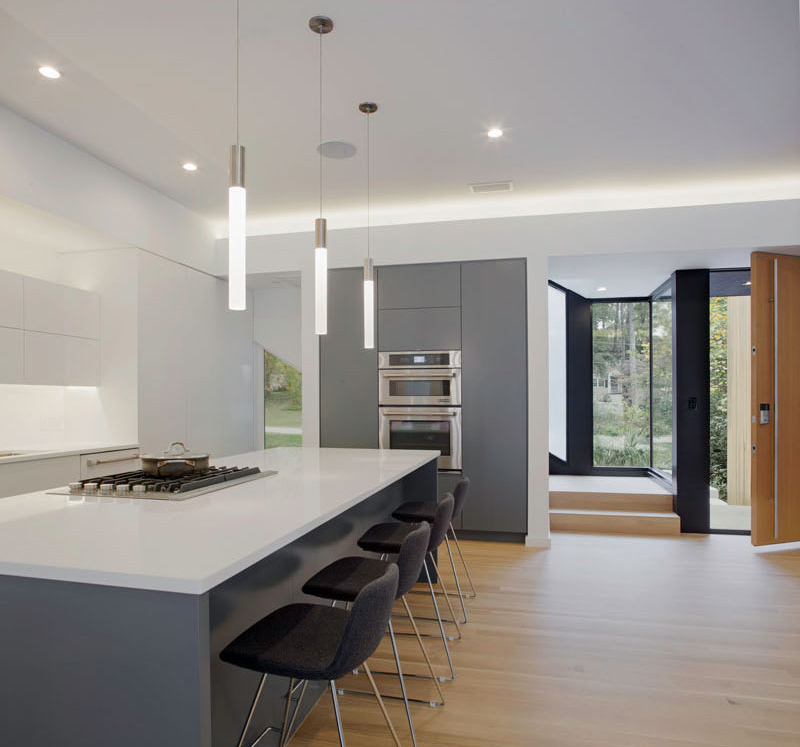 In the grey and white kitchen, there’s a large central island that has enough room to comfortably seat four. You can also see that it used the colors gray and white in it. 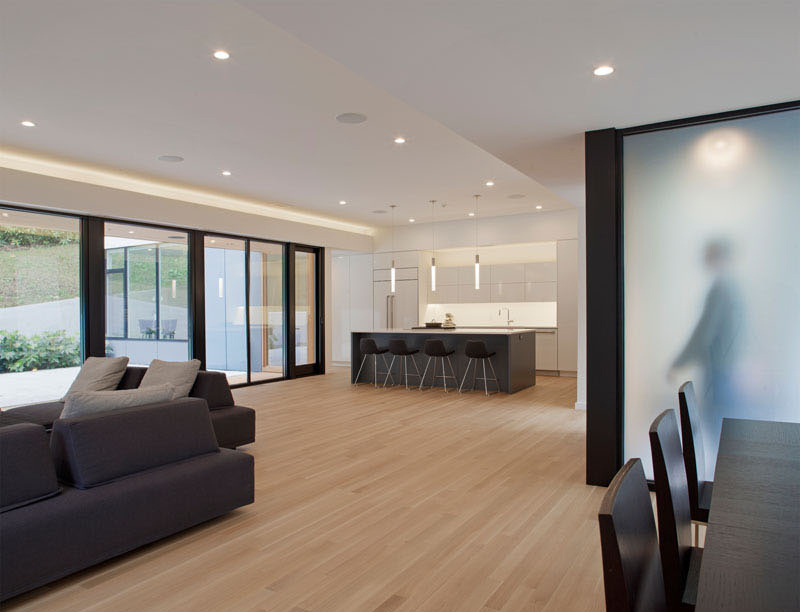 The light wood flooring adds appeal to the space and creates balance with the contrasting colors of white and dark gray used in it. The kitchen’s cabinet is all in white with beautiful lighting. 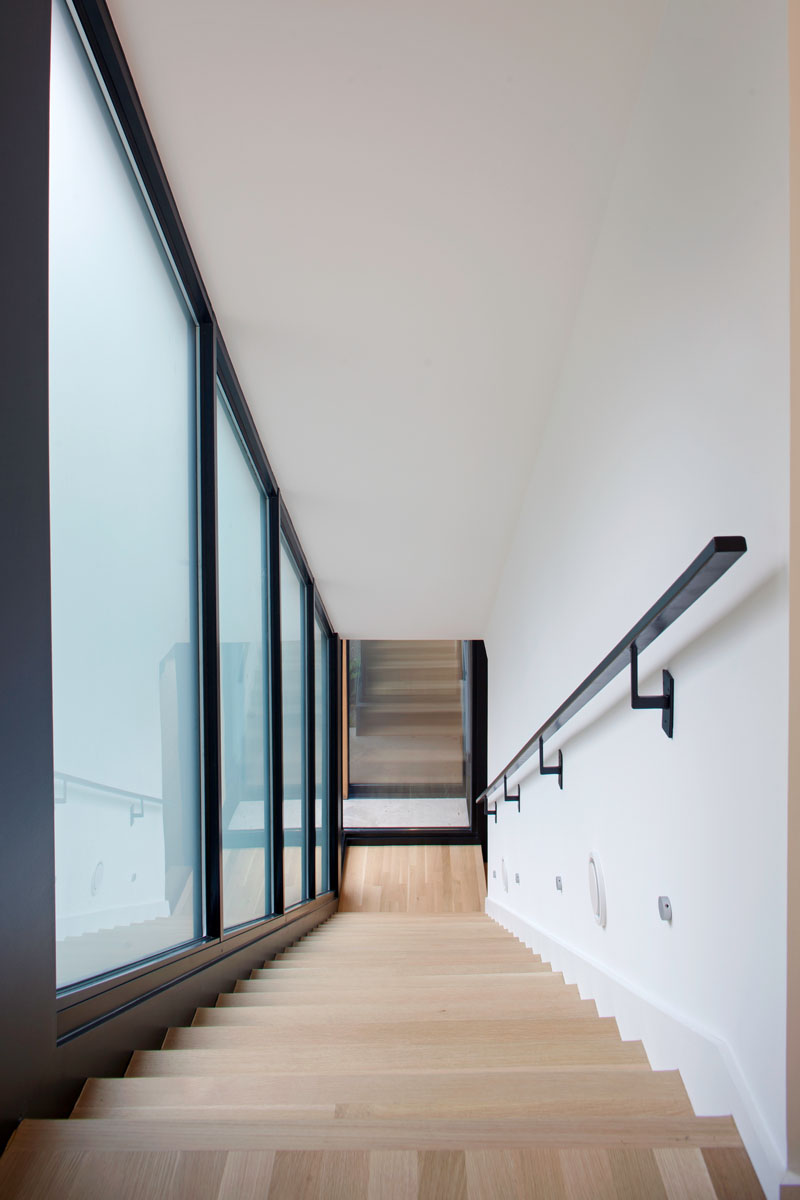 Light wood is used for the stairs that lead upstairs to the bedrooms and to an informal den. Along the staircase is glass windows framed with black aluminum. The stairs is also being highlighted in the exterior of the house. 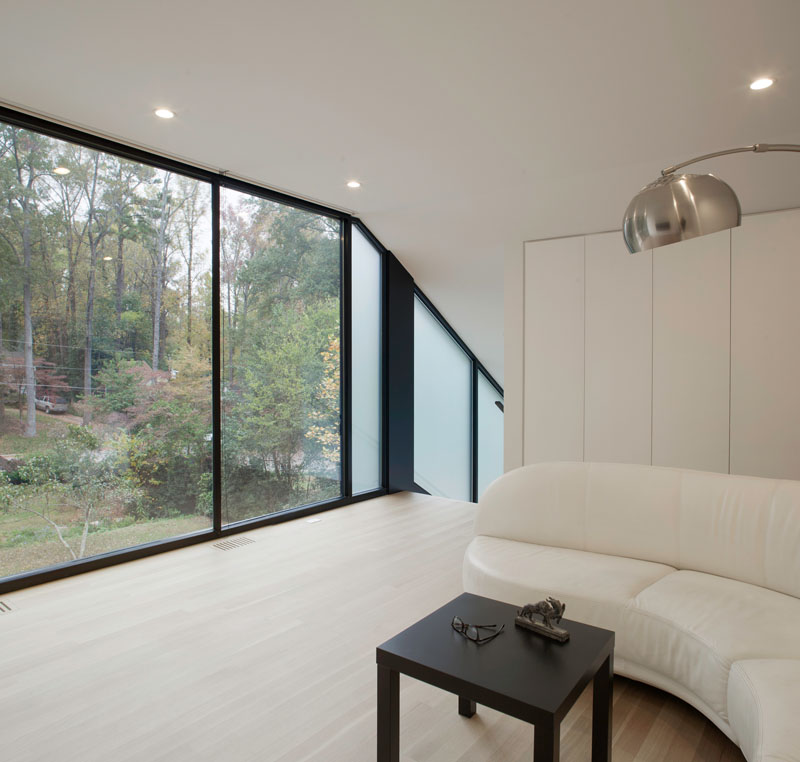 Like the other areas, this space also has while walls on it and light wooden flooring. This is the living and sleeping spaces on the upper level that have views of the surrounding trees. 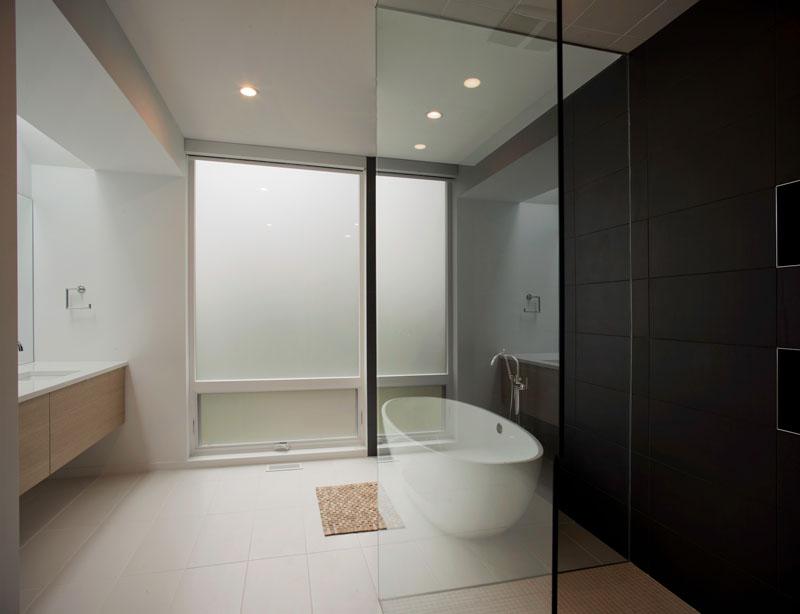 In the bathroom, it has frosted windows to provide privacy. It is also a nice contrast to have a black tiled wall against the all white walls, flooring and ceiling of the space.

This is indeed a beautifully designed home, right? It sure is. It looks very modern both in the interior and exterior. And I also like how In Situ Studio added the house in the sloping topography. Yes, it may be challenging to do that but it is obvious that they were able to pull it off with the way things turned out. I like the design of the exterior especially how it is dealt with the hilly area and how it used different materials in it. How about you, what can you say about this house?

Hale Nukumoi: An Stunning Hawaiian Home for Every Beach Lover

Medlin Residence: A Contemporary Home on a Hill