Because of the strength of concrete, many homeowners and builders alike prefer to use it as the primary material for your home.

But did you know that aside from its being sturdy, concrete also looks beautiful?

While most homes prefer to paint concrete walls, others just leave it as is.

What does it mean?

Well, they retained the concrete look of the home giving the house an industrial appeal.

But that’s not all.

The house also has a unique look that sets it apart from other homes in the area. We are talking about the house that we will feature today which is called the Mach House.

This home is located in Buenos Aires, Argentina and it has a beautiful interior that makes it very inviting.

Take a look at the house below:

Unique feature: The design of this house considered the home owner’s pet dog. 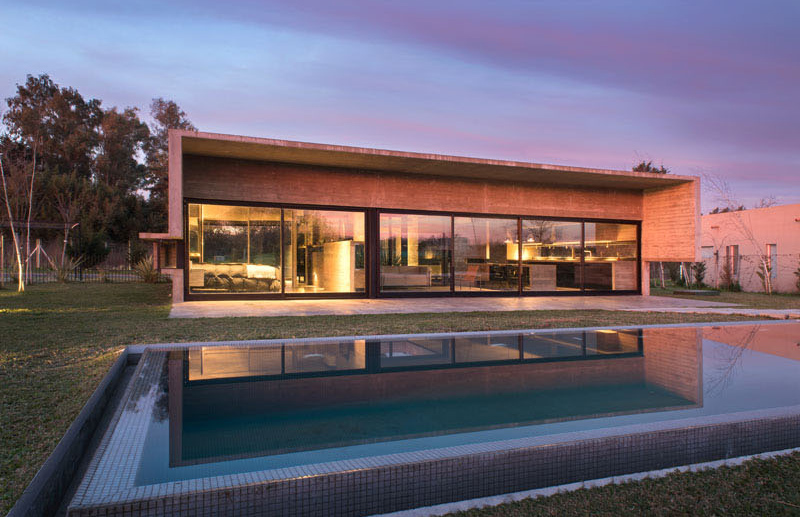 This modern concrete house in Maschwitz, a town in northern Buenos Aires, Argentina is designed by Architect Luciano Kru. It architecture made use of straight sleek lines to compose the structure of the house. This simplicity is also adapted in the home’s interior. 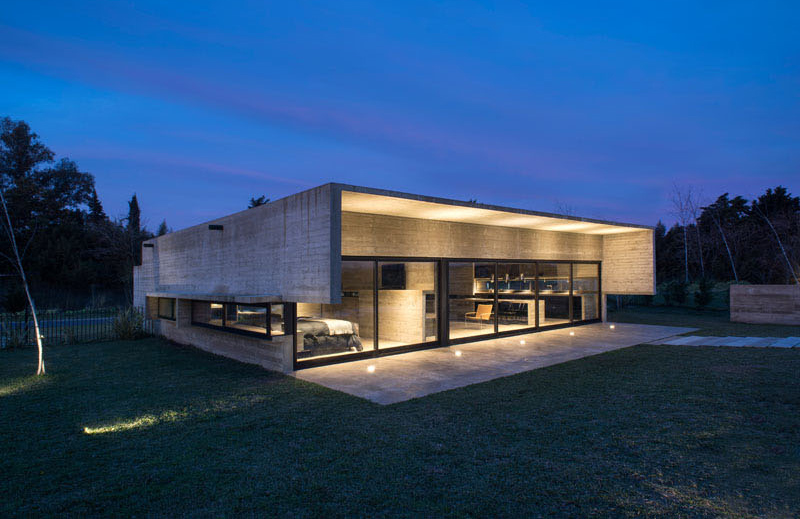 The owner of the house was inspired by his father’s house which was also designed by Architect Kru. It was an exposed concrete summer house. Hence, the owner wanted his house to use the same materials and have the same aesthetic as his father’s home. 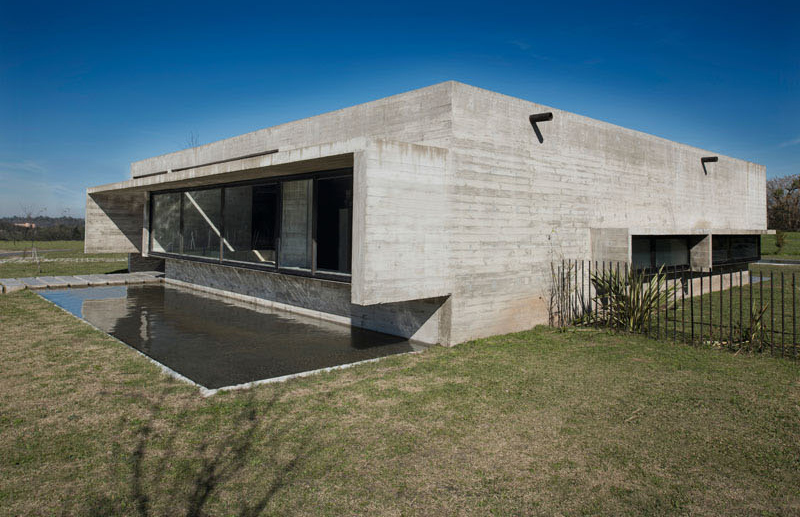 At the front, one can see a reflecting pool and windows that look out onto the street. There are also concrete pavers that lead the way to the front door. It is used to create a bridge over the water feature. 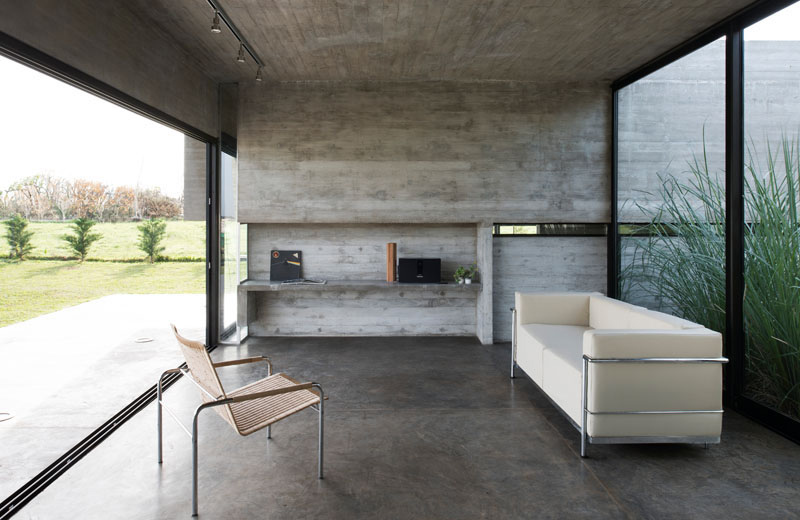 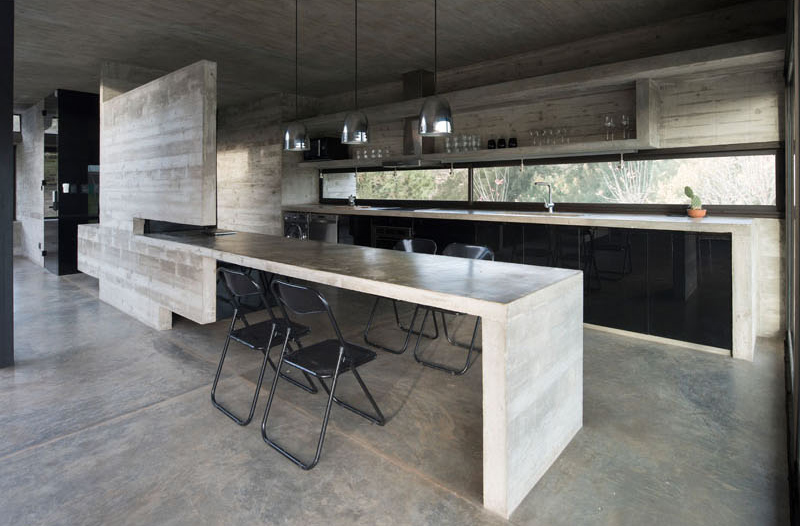 Located beside the living room is the kitchen area. Since concrete is the main material that is used in the home, the same material is utilized to create the concrete countertops. The kitchen also features a large island with open shelving. Black cabinetry and dining chairs compliments with the black window frames of the house. 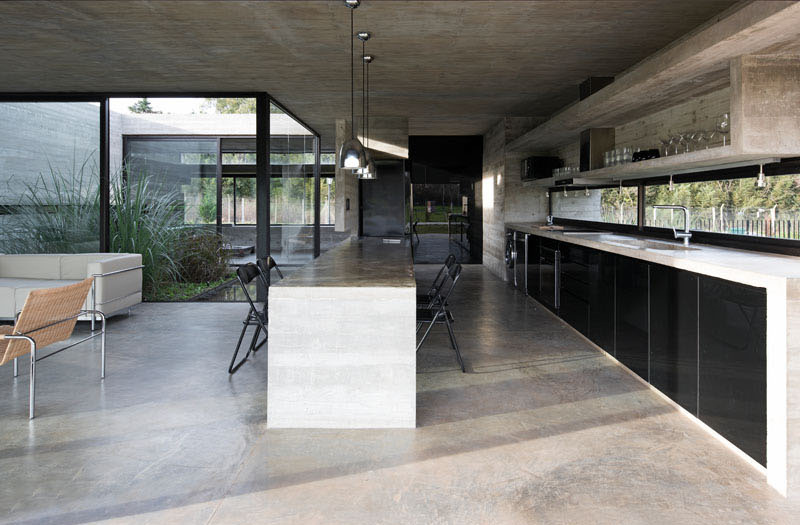 The patterns of the wooden boards are seen here which is left in the concrete from the building process. Also seen here is the view of the inner patio and the dining area. 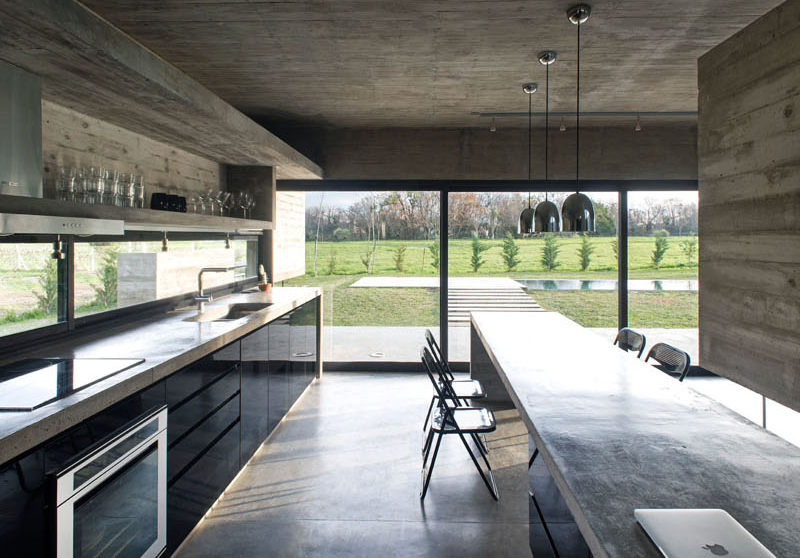 Another view of the kitchen area with open shelves and tall glass windows. Isn’t it nice to have a good view of the outdoor space while preparing meals and eating dinner? 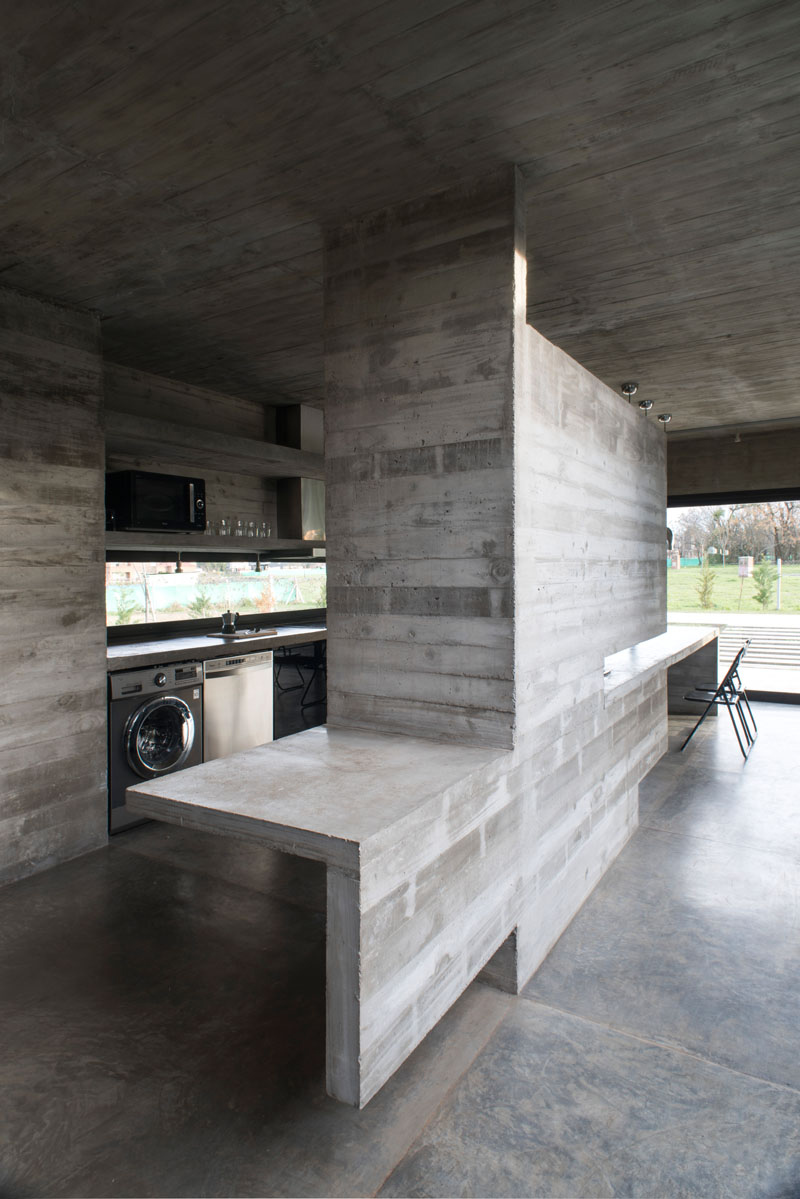 This appears to be part of the kitchen area which also contains the laundry area. Notice that the concrete dining table extends to another countertop which could be used for doing the laundry. 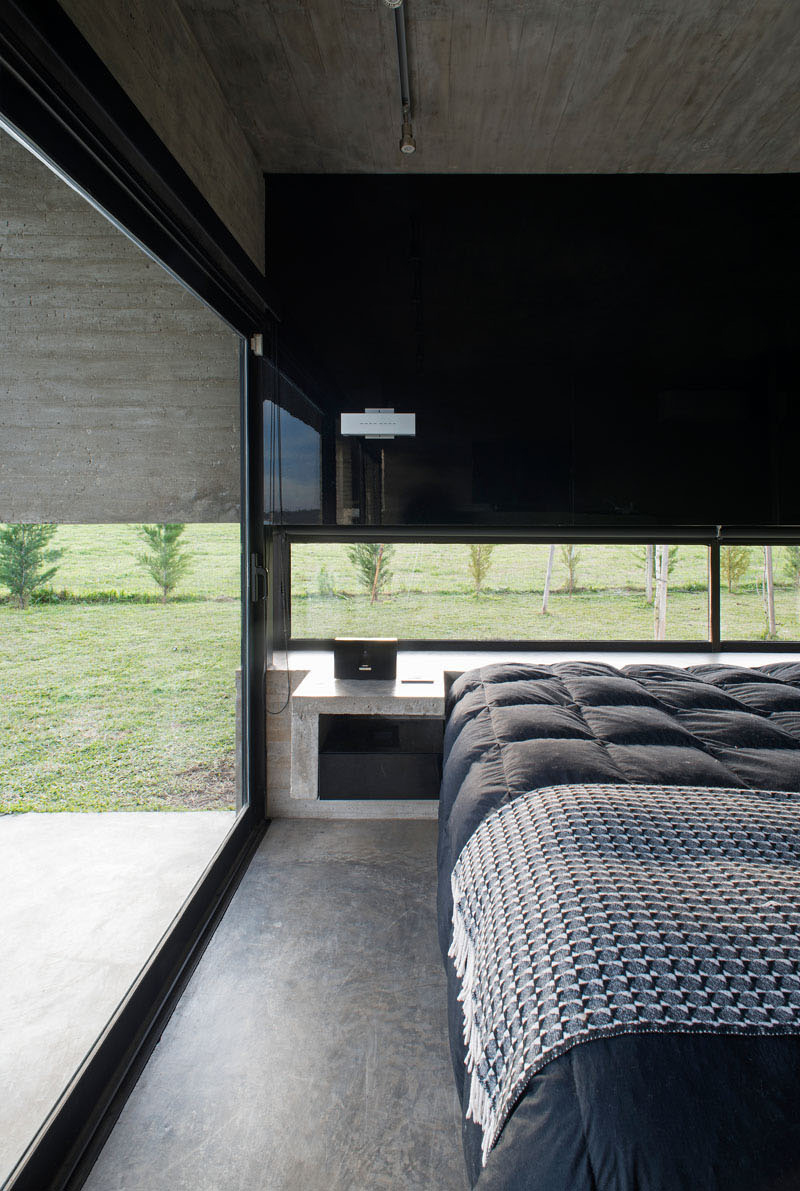 Seen here is the bedroom with plenty of natural light from the large sliding glass doors. The door also opens up to the backyard. Aside from that, light also comes from the window that sits at the head of the bed. The pattern of the duvet set looks really nice here which gives the bedroom an artistic appeal. 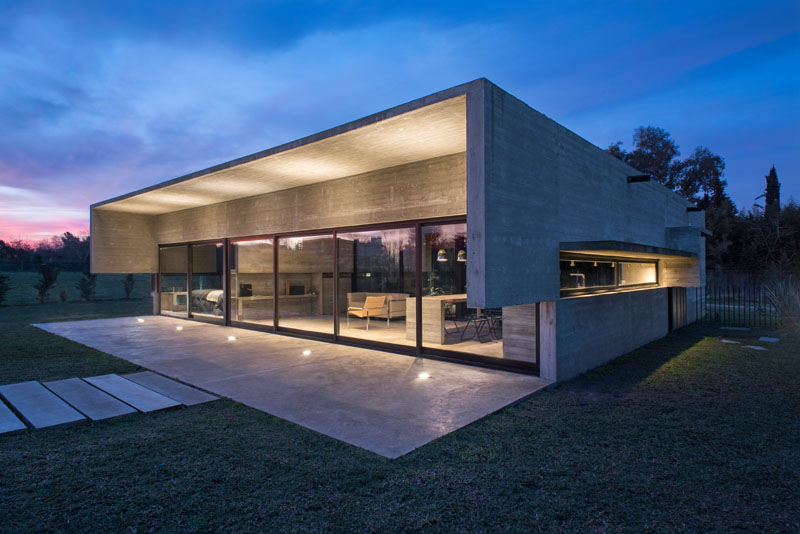 This is the rear part of the home wherein the roof line extends out over a patio which provides some sun protection. There is also a path that leads up to the swimming pool. During the night, the lighting shows off the design of the home and highlights the overhang. 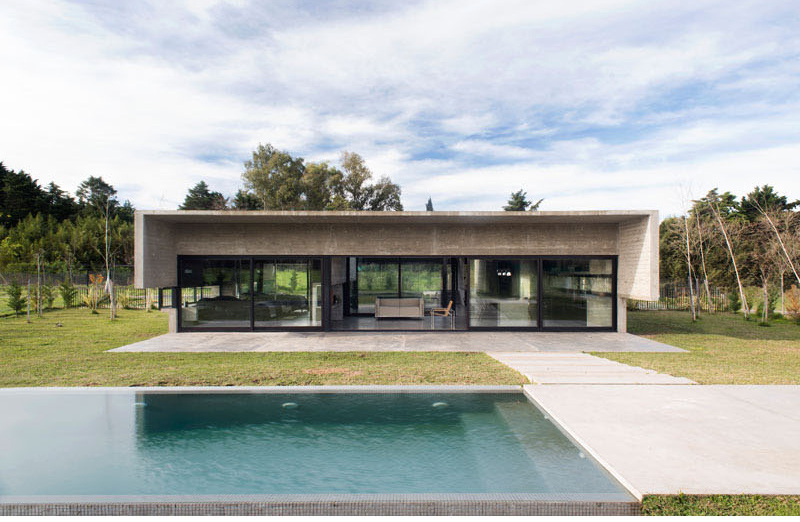 This is the pool area during the day. It still looks inviting despite the lack of lighting. The green flooring tiles compliments with the green ground covering the lawn. 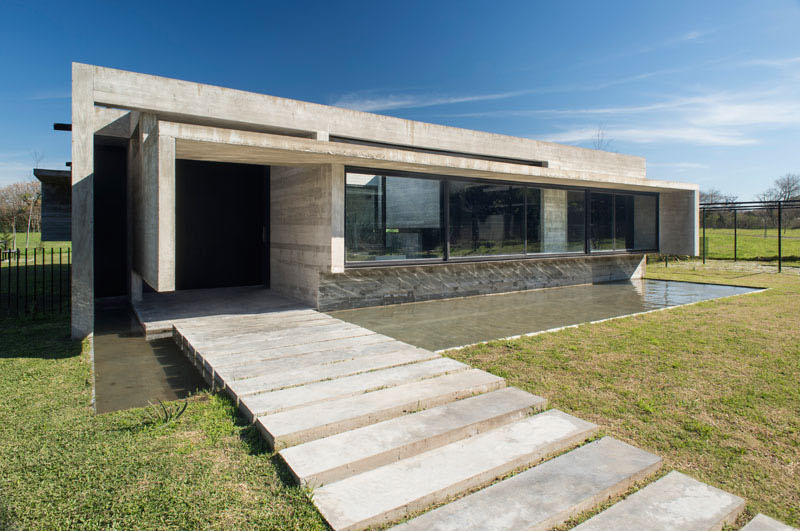 Seen here is the water feature of the house as well as the concrete path that goes over it making it appear like a bridge. 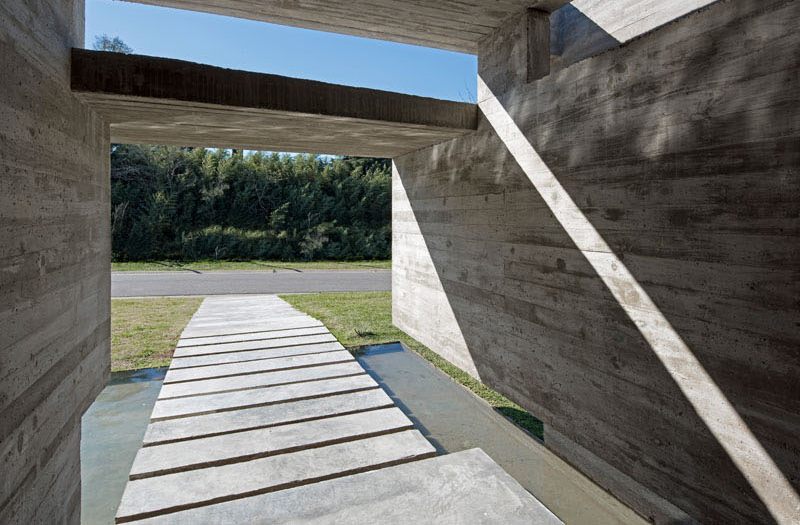 A closer look at the water feature concrete path from inside the house. 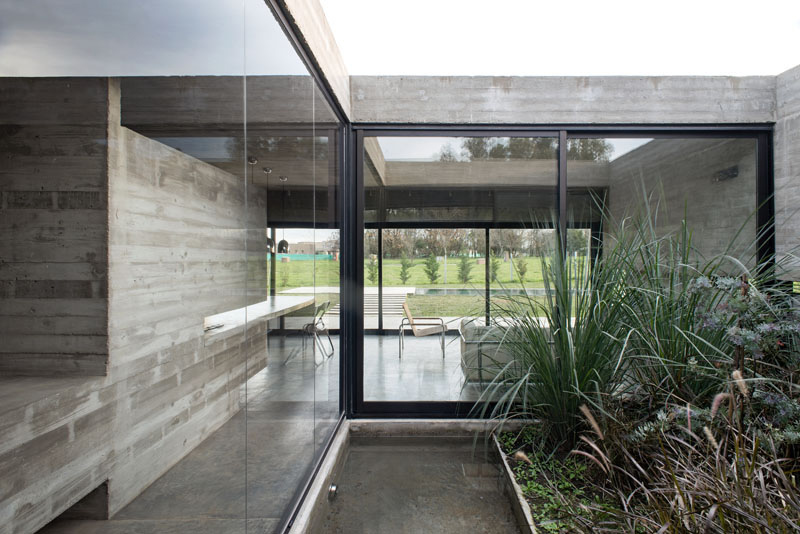 Meanwhile, there is an inner patio with plants located behind the living room. Another smaller water feature is also found inside the home.

What can you say about the Mach House from Luciano Kruk? For sure, this house changed the way you look at concrete homes. If you think that concrete houses are boring, you will realize that it is not that bad at all. In fact, it can look beautiful and unique when the design is done well- just like what you can see in the images above. The choice of furniture, color scheme and lighting has a huge impact to the appeal of the house. Of course, the plants in the outdoor space matters too! Would you consider using concrete finish for your home? Are you brave enough to pull off this look?

Lark House in Washington Made from Salvaged Materials