A house called the Kew House is set within the Kew Green Conservation Area of southwest London, England. The four bedroom family house is formed of two sculptural weathering steel volumes. Behind that is a nineteenth century stable wall which made the home very unique. The client wanted a home where the kids are seen running around it, summer dinners outdoors as well as a quite nook with social spaces. They also want a basement and an area for drying laundry. Hence, the house was designed based on how the family wants to use it.

Kew House included an internal landscape of alternative routes. The spaces are connected to create moments of delight for both adults and kids. The home is informal but it is rich of incidental spaces. It is also has light and complex volumes. One good advantage of using weathering steel is that it is maintenance free. The material is essential for the enclosed site which is softened by a patchwork of expressed welds and perforated panels. Another good feature of using the material is its deep orange tones as well as its perforations which echo the dappled light and autumnal palette of nearby Kew Gardens. But despite the success of the project, the designers actually faced some planning constraints that include: “a conservation area context, a change of use and no access on three sides -formed a backdrop to the project”. The solution to all these is to “insert the house behind a retained 19th century brick gable end and split the house into twin gabled forms in keeping with local massing”. 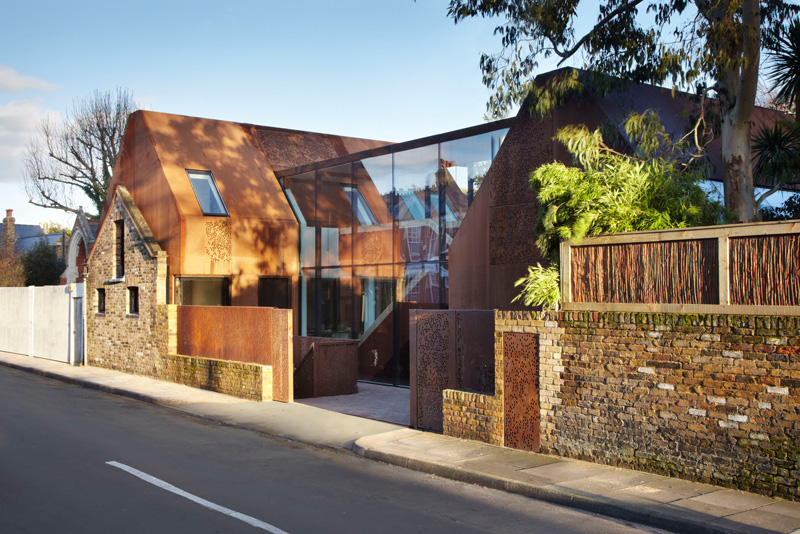 At first glance, you will be intrigued of how the house looks like. Apparently,it used a mix of materials in its design but what can be clearly seen here is the use of weathered steel. The house was built behind the wall. The brick walls didn’t make it look ugly or old. But it served as an artistic backdrop of the home. 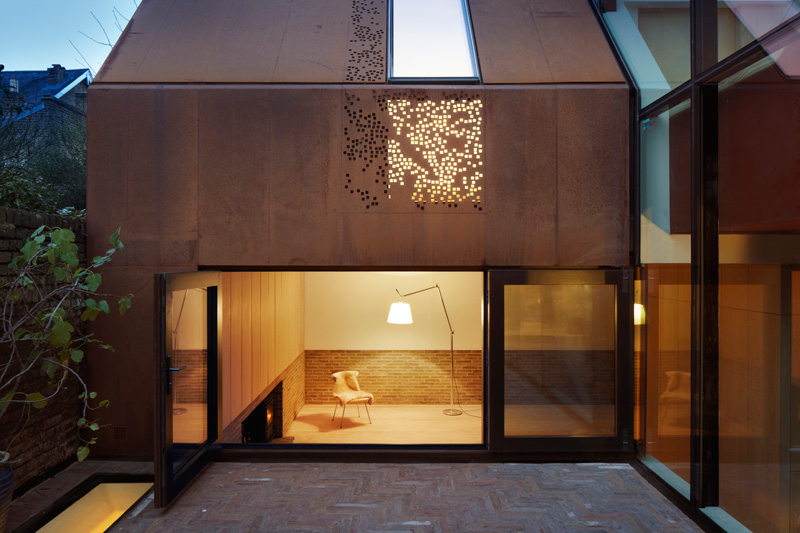 White frames were added for the windows while there is a white cube where the fireplace and television are contained like what we can see in this image. Brick walls are also used for some part of the interior. 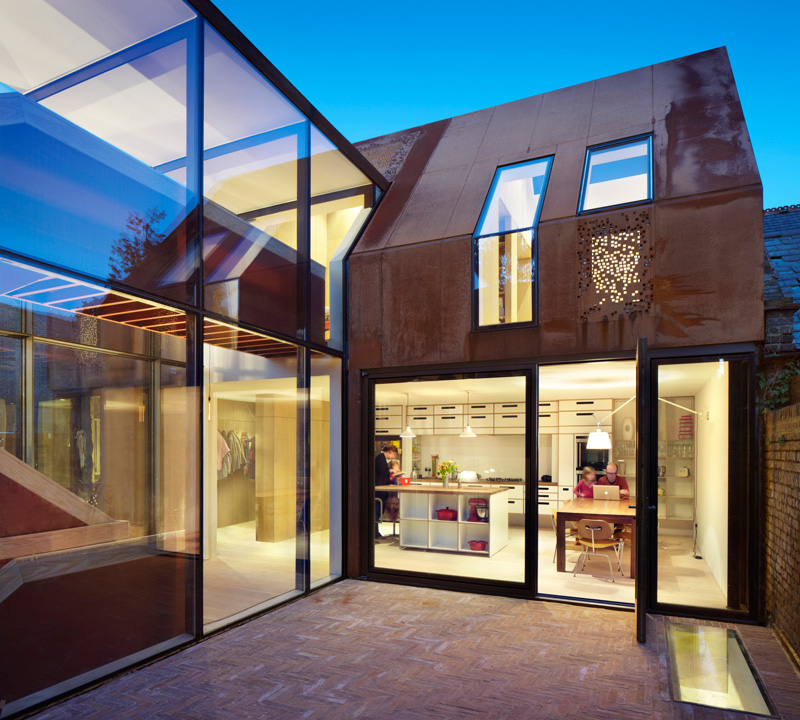 The house consisted of two rectangles with one slightly smaller, set back and sunken 1m lower. On every wing, there are living spaces on the ground floor and bedrooms above it. One interesting feature is how the wings are being connected with a glass enclosure. This link allows light to pour into the house while providing breathing space between internal spaces. 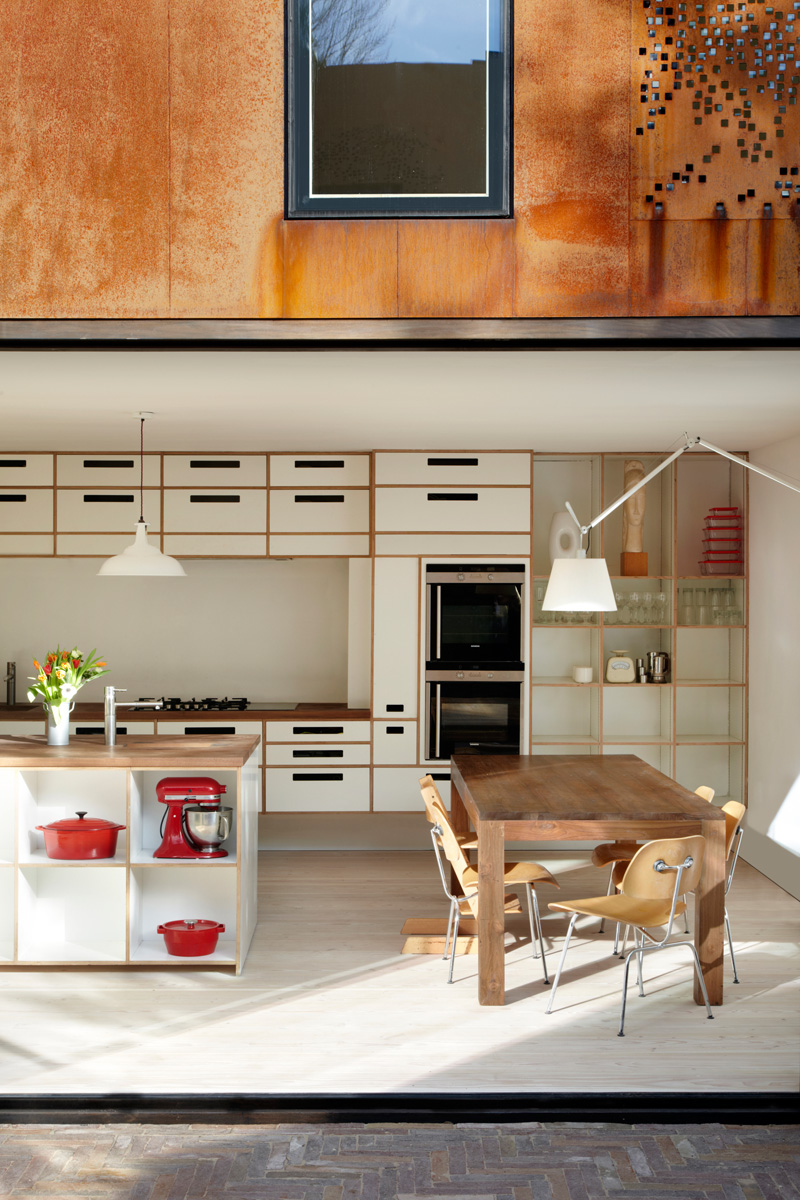 An oak veneer paneling and Dinesen flooring are seen in the interior. The use of light, natural and refined palette of materials adds more beauty into the home. The two shells where the main living and sleeping areas are housed are made from 4mm weathering steel. This is considered as a hardworking combination of structure and facade. 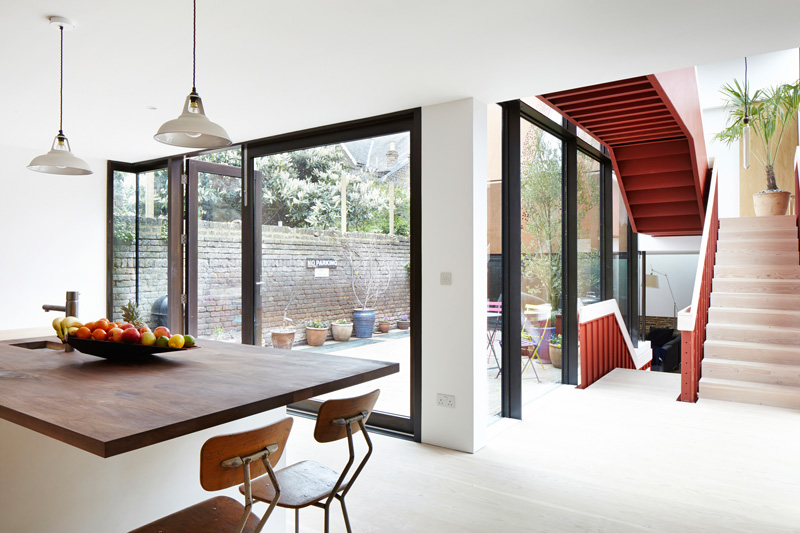 We have seen the kitchen area above while this one is the dining area where the outdoor area could be easily accessed. You can see the use white in the interior and some steel in red.

Wooden staircase leads to the upper areas of the house. It has that subtle industrial look with the red steel on the side and under the wooden treads. 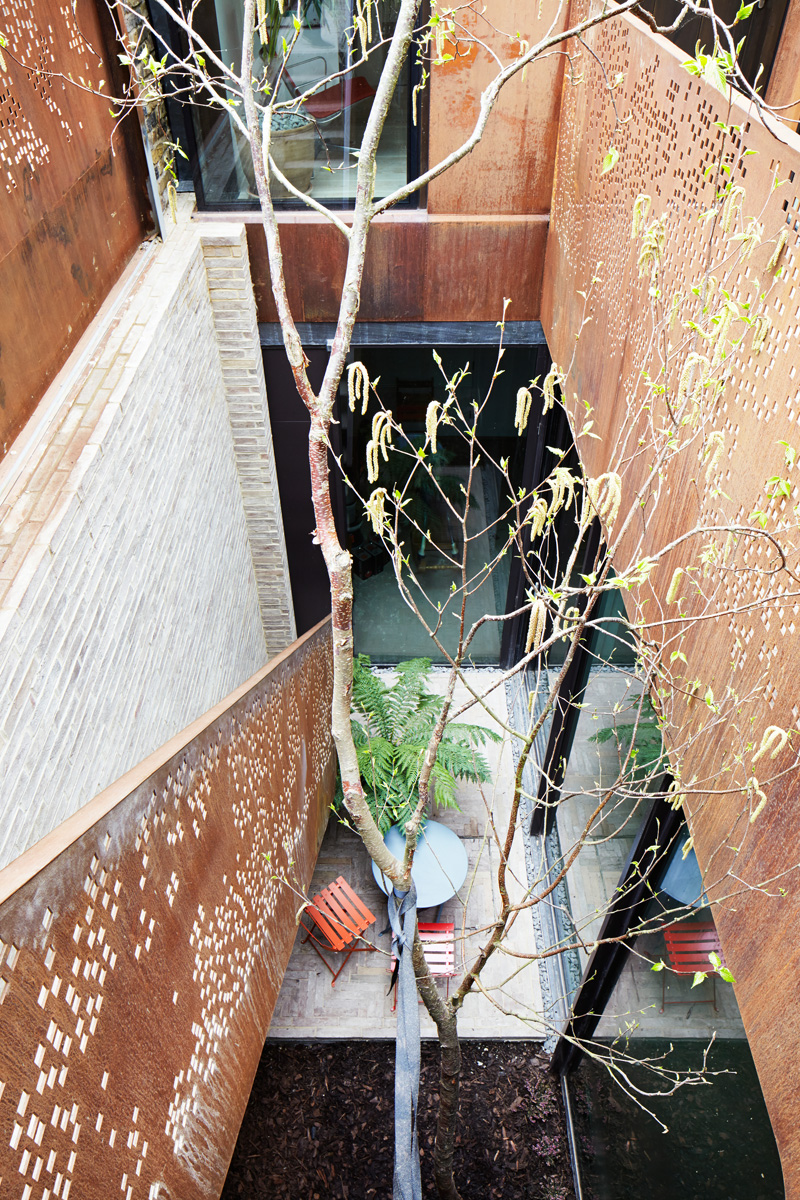 Aside from this void where a tree grows, you can also notice the tiny rectangular holes on the weathered steel where natural light pricks in. It actually looks really beautiful once darkness come. 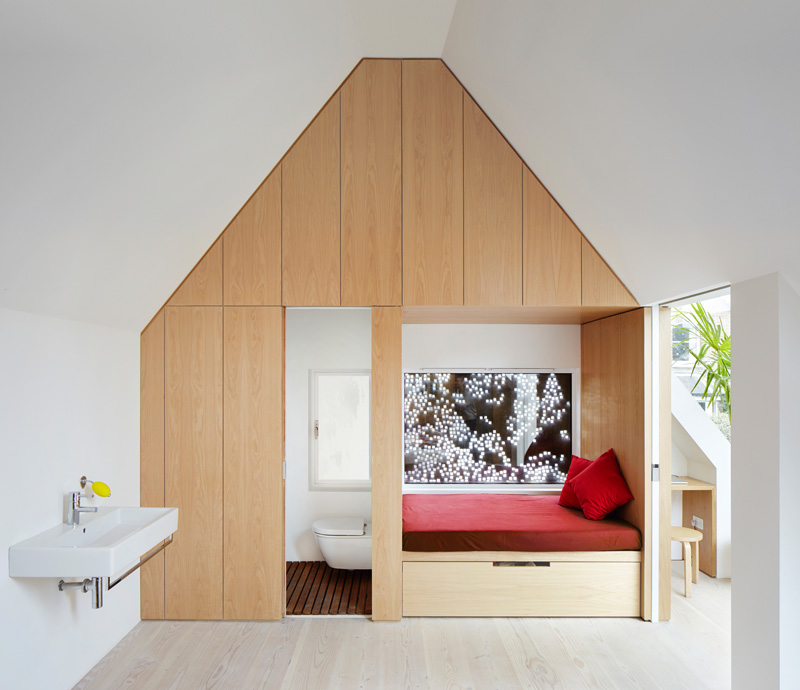 Seen here is the bathroom where a bench is added. See those starry-like lights? That is how it looks like when the rectangular holes are lighted. 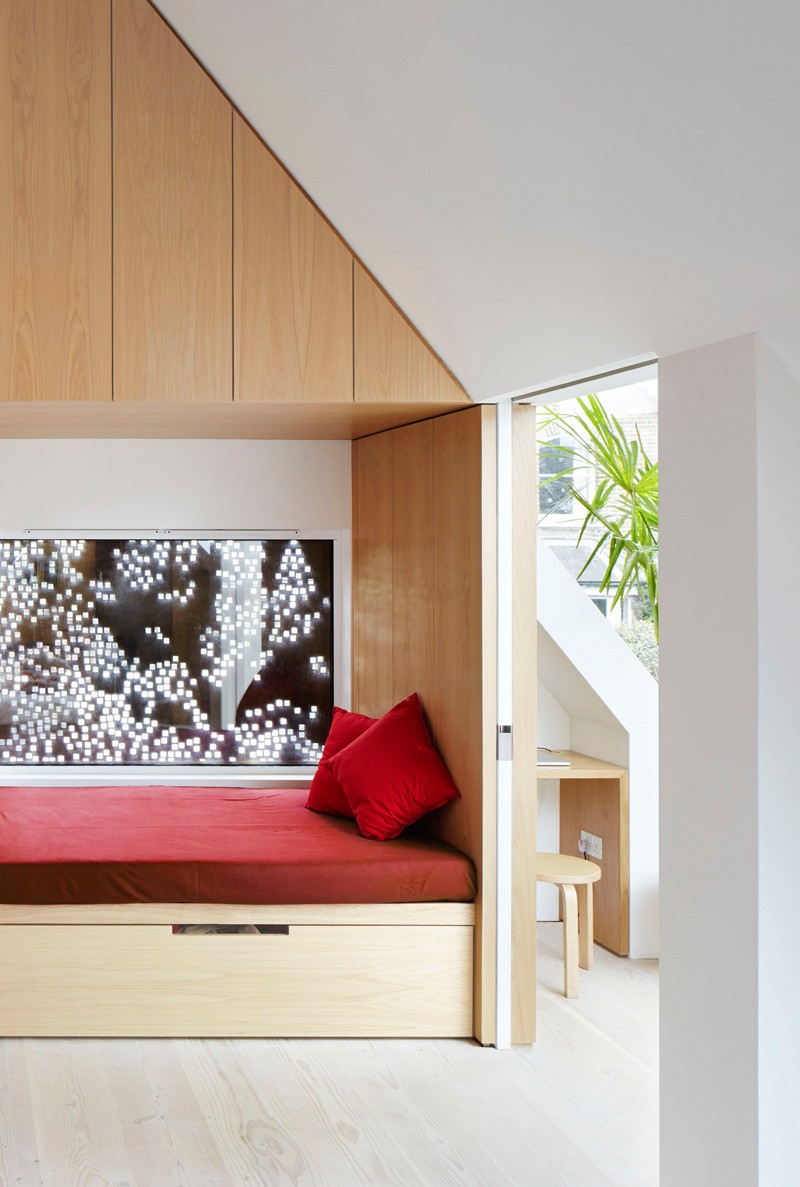 This is one example of a good use of space because of the storage under the bench. 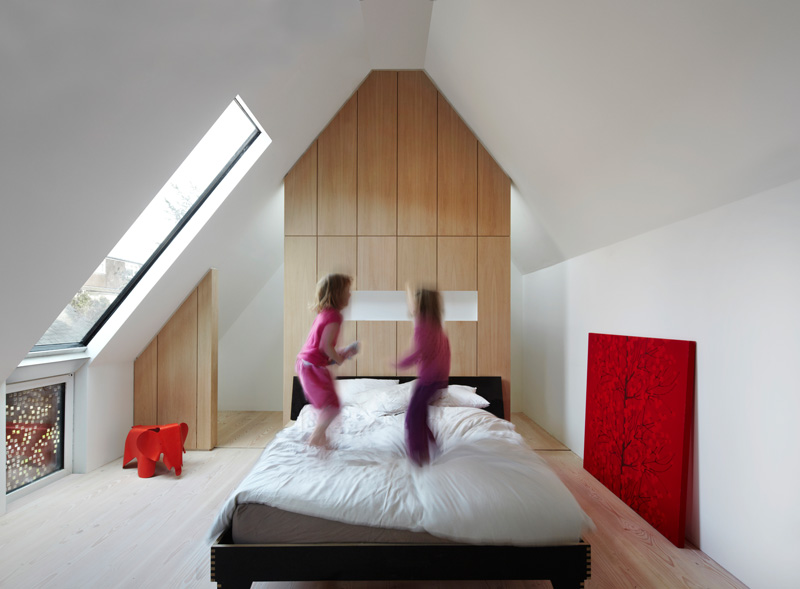 The bedroom use wood for one side of the wall that seems to hide a play area. How the window is added here is also a good idea. 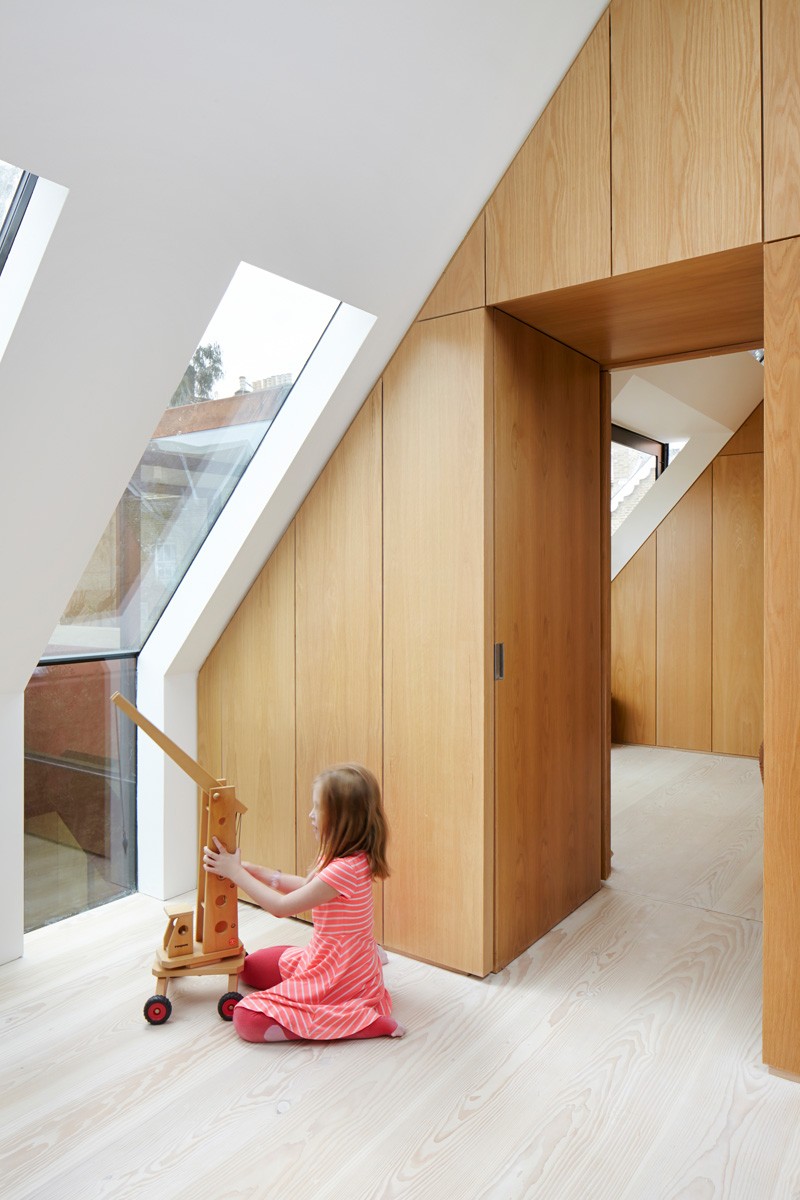 The wooden volumes in this space are storage areas that look sculptural at the same time while it defines this part of the interior. 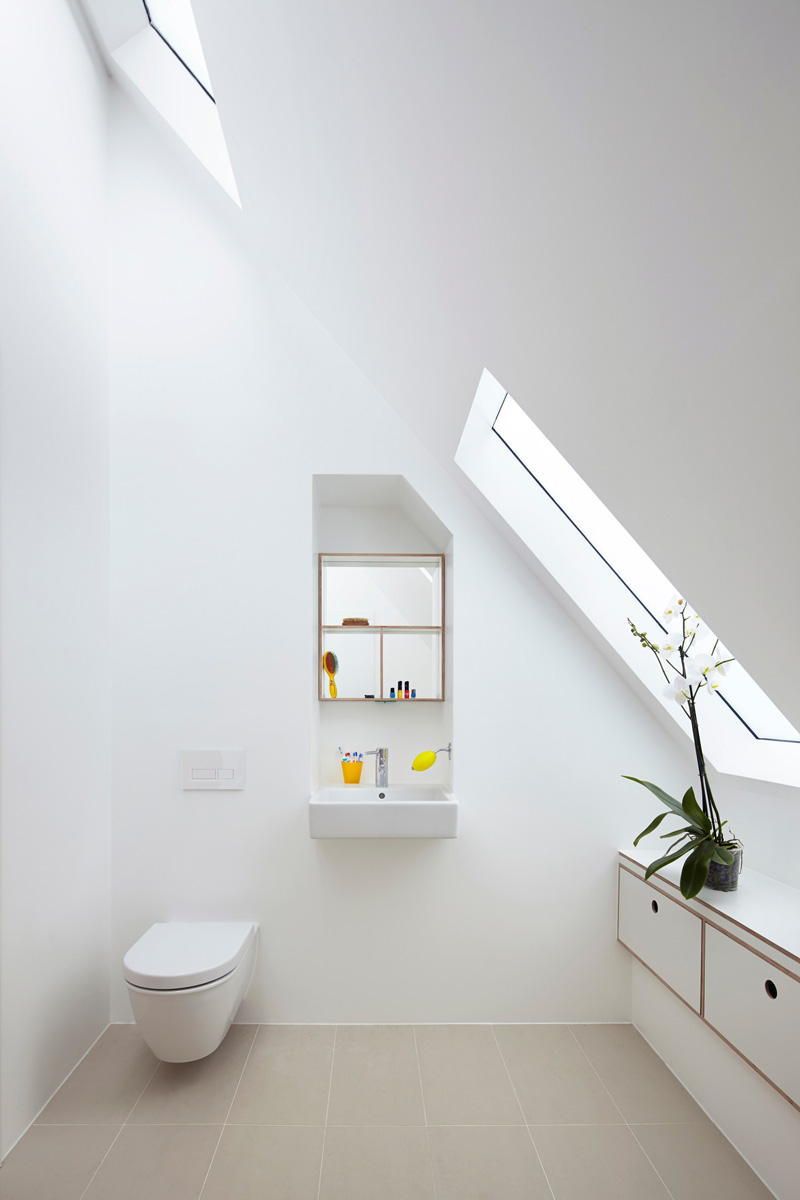 And this one is the bathroom in white. Aside from the white walls and fixtures, it has gray flooring too.

I honestly find this house both beautiful and intriguing because of its use of weathered steel. This home designed by Piercy&Co is indeed one of those creative and functional spaces that we would all adore. The natural patina of the weathering steel with its marks, stains and perforations bring in different characters to the surface that varies on the exposure and orientation. No doubt, weathered steel has a huge impact to the look of the entire home. We can all see that! I also like the idea of letting light with those tiny rectangles. In the interior, it also brilliantly made use of wood, concrete and yes, weathered steel.

Breathtaking Tropical Bali Villa for Modern Living in the Tropics