Look how the owners of this small apartment live big!

Because of the increasing number of people who are looking for residential areas, we won’t wonder why even small spaces are being occupied. While others just use the area just the way it is, some homeowners think big and turn it into something they can call home comprised of everything that they need like a bedroom, kitchen, living area, plenty of storage and others. Today, we are going to show you an apartment that may appear small but it has everything that you would definitely wish for to have a comfortable living.

Architecture firm 3XA was hired to design the renovation of a small 312 square foot (29 sq m) apartment which is located in a nineteenth-century building in Wroclaw, Poland. The firm was requested by the homeowners to design a solution that would maximize the available space. The priority of the reconstruction project was the “liberation” of space and to free up an independent sleeping area. It has a tall ceiling with a height of 3.70m to create two equivalent levels and add a mezzanine. Above the entrance hall and bathroom with an area of 6.45 sq. m. is the bedroom with a giant bed. The apartment also features a wardrobe hall with comfortable passage. The “broken” mezzanine gives the impression of a “full-fledged” bedroom and also gained space by opening the kitchen to the room and sticking to the wall of the blind door. Let us take a look at how the renovation turned out.

Unique feature: A small 29 square meters apartment was redesigned to maximize the space adding a mezzanine for the bedroom. 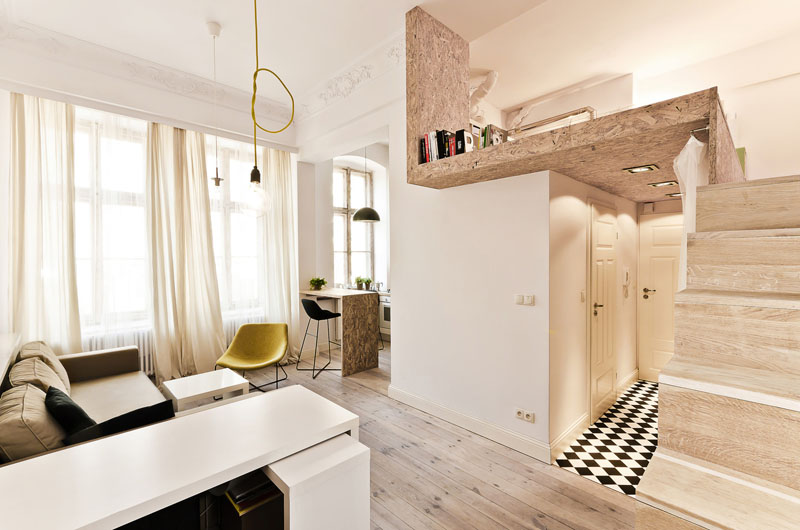 Upon entering the apartment, one will go through a small hallway with black and white flooring. The bathroom entrance is on one side, and it has an open wardrobe with thin curtains and a bookshelf on the left. After passing through the hallway, the space opens up into the living area. 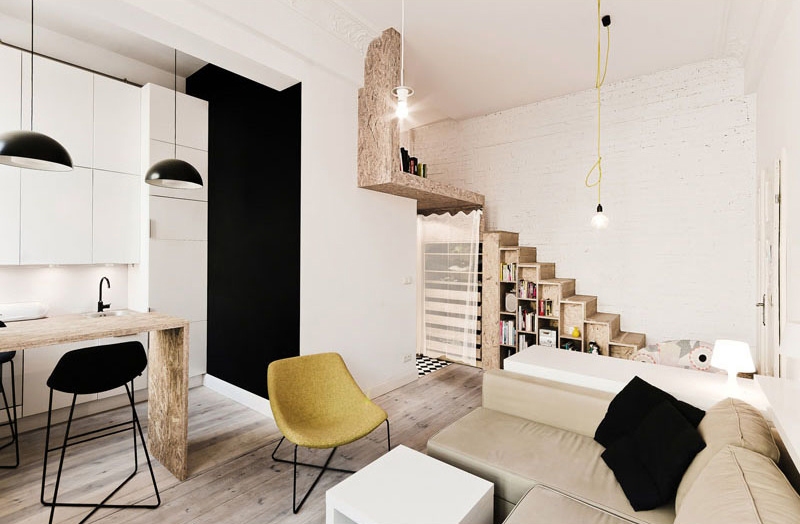 Although the apartment has a small floor area, it was able to do more because of the ceiling height. What you see here is the entire apartment already and it indeed has everything that one needs for a home. The layout is perfect and it doesn’t have so many decors and furniture that will make it look very crowded. Such a great job indeed and such an inspiration for those who live in a small area but wanted to live big! 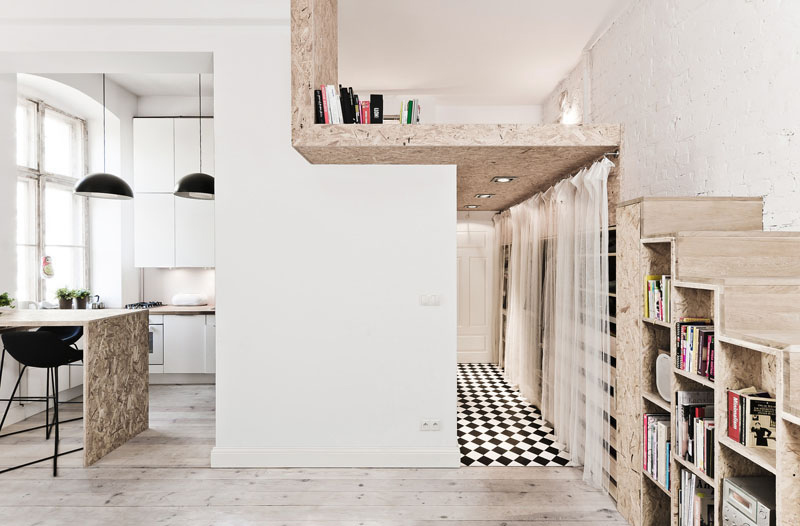 Since the apartment has a lot of height, the designers were able to provide a sleeping loft located above the bathroom, allowing for plenty of room for a decent sized bed. This is one thing that the owners always wanted- a decent sleeping area despite the small space of the apartment. 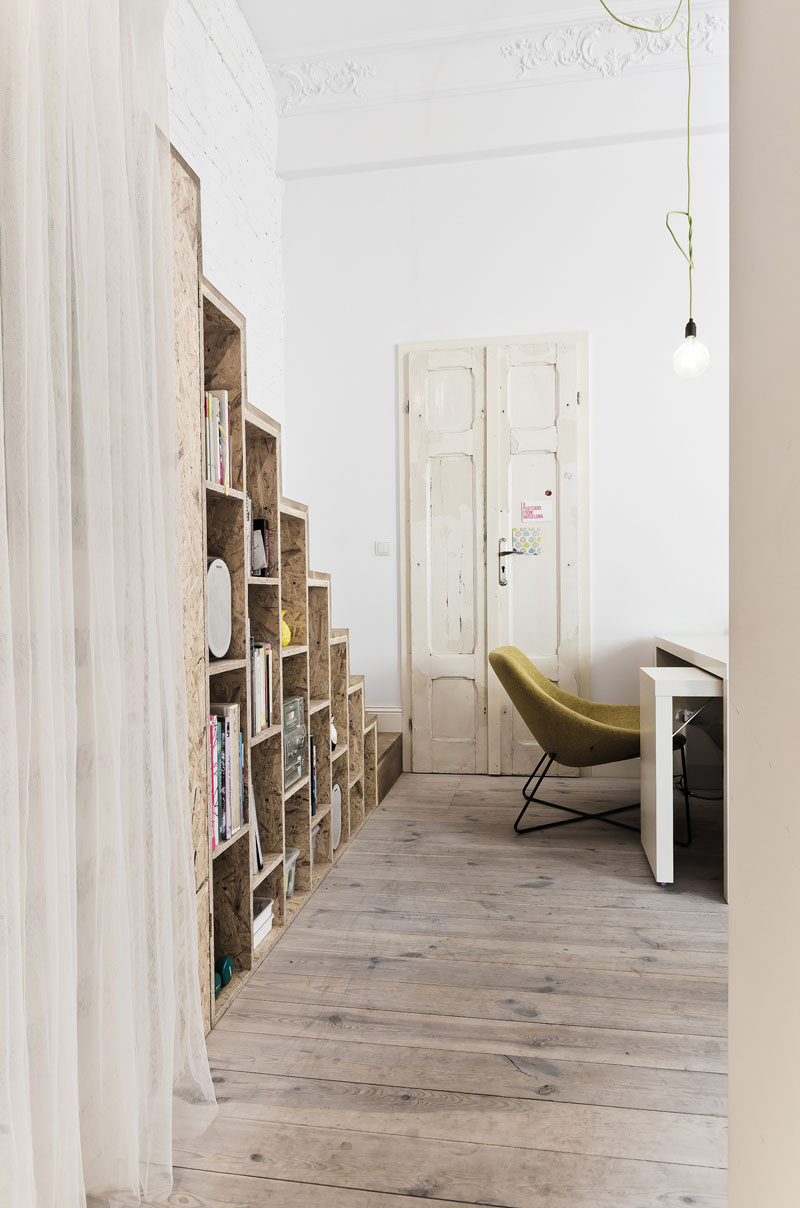 Touches of the original apartment design was retained just like that old door as well as the ceiling detail. This way, the owners can still spot some features that will remind them of the old space. It is also a way to keep a bit of the structure’s history. 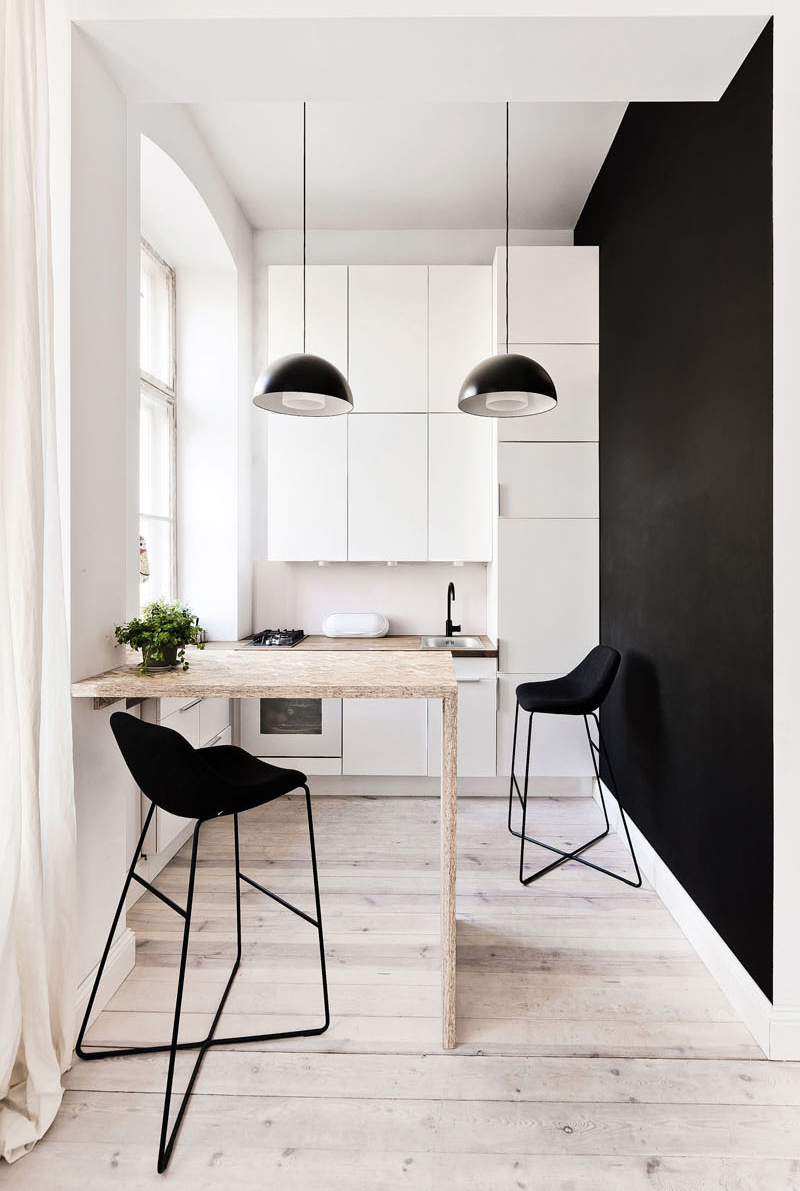 Around the corner is the kitchen which is small but functional. It included a lot of storage, and has worked with the height of the apartment by including an additional row of upper cabinets to make use of the space. Another lovely feature of this space is its use of contrasting colors white and black. It also as sleek modern counter height chairs and lights. 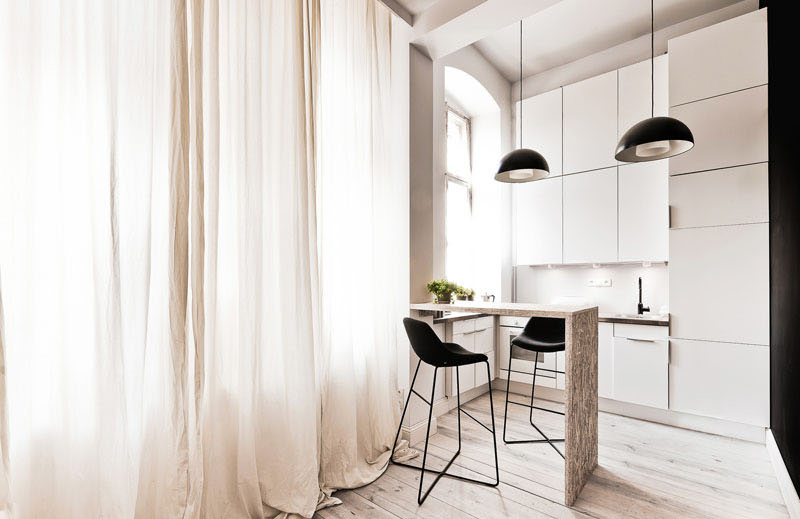 Seen here is a small breakfast bar that provides a place to eat. Aside from that purpose, it also acts as a separation between the living area and the kitchen. Although this bar is small, it looks very pretty especially that it used an open cantilevered counter. 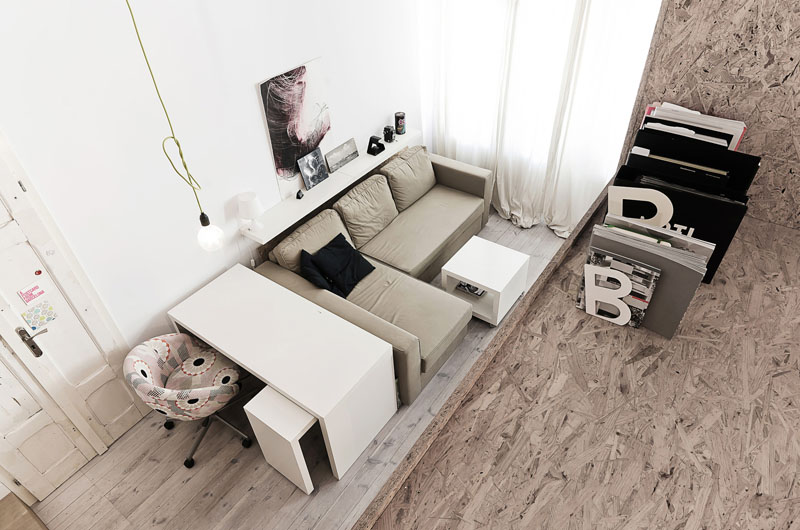 The living area is compact but very comfortable as it used a gray L-shaped sofa. Aside from the living area furniture, it also includes a workspace and a place for resting in order to maximize the area. I like the idea that a floating shelf was added to the wall just above the sofa.

Read Also: A Stylish Loft in an Old Workshop in Spain 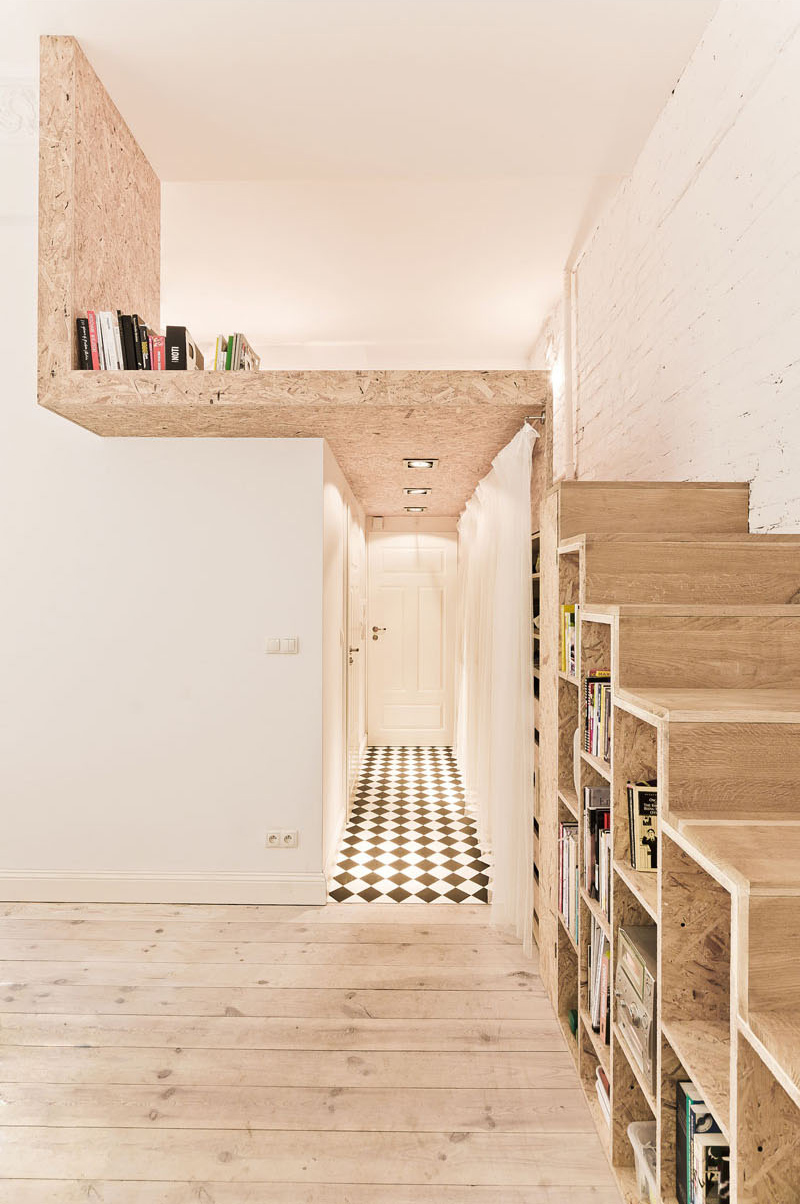 The space has a textured ceiling which is the same as the ones used for the bookshelf. Notice that on the side where the windows are, white sheer curtains were used which brings softness to the space. 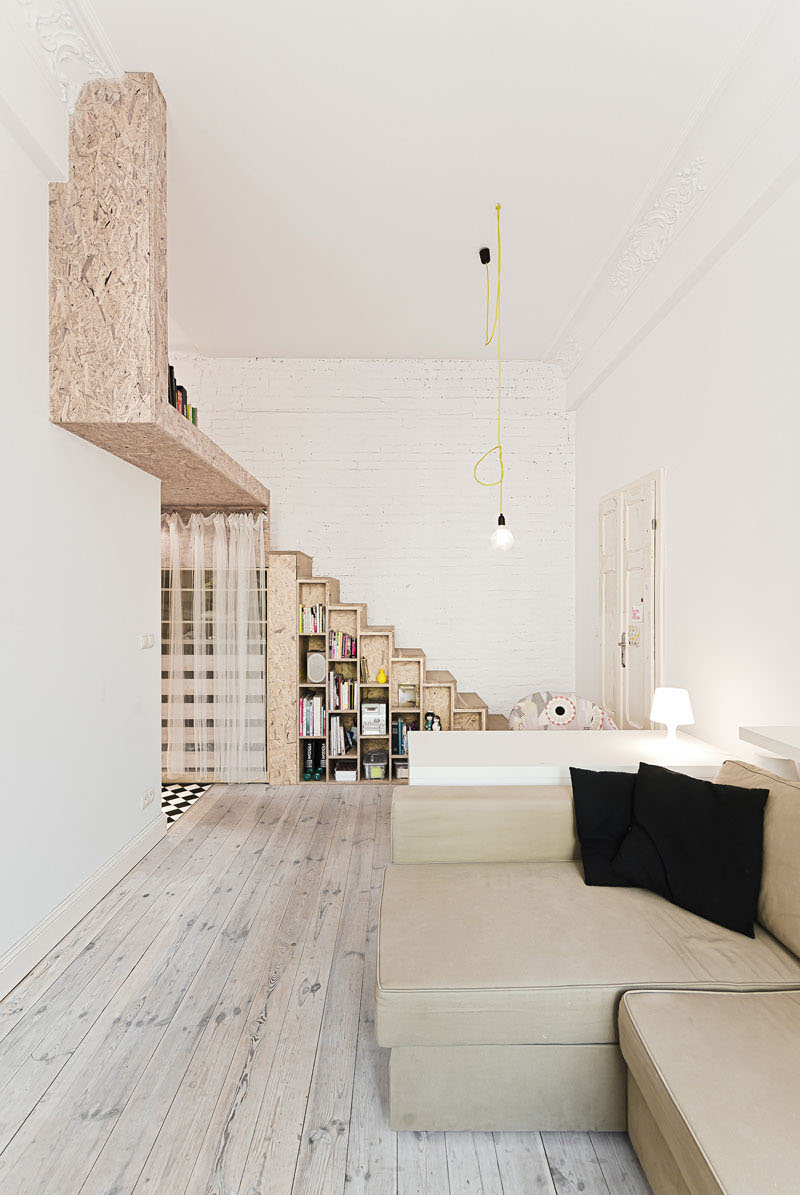 Next to the living area is the stairs to the lofted bedroom. As mentioned earlier, these stairs also function as bookshelves to provide extra storage space, which is apparently necessary in any small apartment. The staircase-bookshelf sure added appeal to the interior too.

What 3XA Architects did to the apartment is indeed impressive. Despite the small available space, it managed to maximize the area and add everything that the homeowners needed. One look at it will make you conclude that the apartment was indeed well planned in terms of layout. The designers also made sure that everything is functional in the area, so not to waste any space. But aside from that, the architects did not miss adding appeal to the interior and make it aesthetically pleasing. That is why, the overall look of the house definitely makes it a winner!

Before and After: A New Bright Look for a White Beach Condo in New Jersey